Teen Suicide Highlighted In Breaking The Moon At NYMF

Teen Suicide Highlighted In Breaking The Moon At NYMF 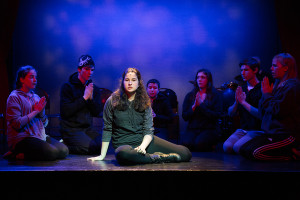 Normally I do not attend readings at NYMF, unless they have a special interest to me, as I am just overly booked. I never review them as it is just not fair to the show. In the case of the acclaimed performing artist, Amy Sternberg’s, Breaking the Moon, I have made an exception. I attend because teen drug use, self harm (cutting), sexuality, guns, bullying and suicide is so rampant and I believe theatre can help stop this epidemic. Teen suicide is the second leading cause of death for ages 10-24 and for college-age youths. More teenagers and young adults die from suicide than from cancer, heart disease, AIDS, birth defects, stroke, pneumonia, influenza, and chronic lung disease, COMBINED. Each day in our nation there are an average of over 5,400 attempts by young people grades 7-12. Four out of Five teens who attempt suicide have given clear warning signs and had the people around them been paying attention and realized this epidemic this could have been prevented. The number one cause of teen deaths is drug use. More teens die from prescription drugs than any other drug. 60.7% of high school seniors regularly use marijuana and the THC (the active ingredient in the drug that causes addiction) is nearly 5 times stronger than it was 20 years ago. 77% of high school students reported having sexual intercourse by the time they were 13. These numbers are staggering, so a musical that highlights these issues is relevant and highly important. 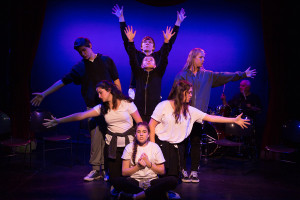 Breaking the Moon, takes place in a treatment center where seven teenagers, who all know and grew up with each other struggle to explore the fear of visibility and rejection. Through it all get redeemed by the healing power of connection and recovery. Through song, movement and dialogue the characters break through to an inner knowing that they are worth doing the work to survive and thrive. 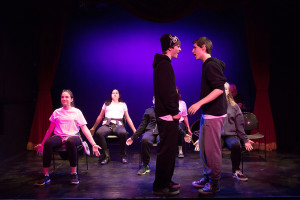 The problem with the show is that it seems like it was written for a church youth group and it does not get as gritty, real, or as honest, as this kind of show needs to be. The music performed by Ms. Sternberg, with Mark McColl on drums and Tricia Osterberger on guitar, is performed well but with songs like “Turn on the Light,” “Burning into the High” we are given pseudo pop ballads, that just seem too “cute” with a message that everything is going to be all right. The problem is the kids, this needs to reach are killing themselves and or trying to because this is not the truth.  Everything is not going to be all right and they need the tools on how to cope. Most teens after committing a suicide attempt say they did it because they were trying to escape from a situation that seemed impossible to deal with or to get relief from really bad thoughts or feelings. If that teen is not given tools instead of a feel good, see the light, kind of message they will try again and they will succeed according to statistics. Pop psychology is not the answer. Without going into great detail, I have been here, as have many people I know. In my high school class alone approximately 20 people a year succeeded in killing themselves. My friends kids deal with this on a very real bases. This is not fiction, this is reality.

The cast though mostly amateurs performed well. Sternberg, who wrote the entire piece, also directs and choreographs and in these aspects she completely succeeds.

I recommend for Ms. Sternberg to go see a company called Girl Be Heard. This company takes on these tough issues and completely succeeds. The reason why, is it is the kids themselves write and perform pieces based on all these issues and more. The result is, it is heartbreaking, real, honest, touching and eye opening all the things Breaking the Moon should be, that I did not feel.

Just to let you know, the audience which saw the show with me for the most part reacted positively, but it was filled with a lot of family and friends. The greatest test to know if your show is working, is to take it to a treatment center and have those kids read it. If they respond positively then you know your show works.

I wish Breaking the Moon, success as it journey’s to completion.