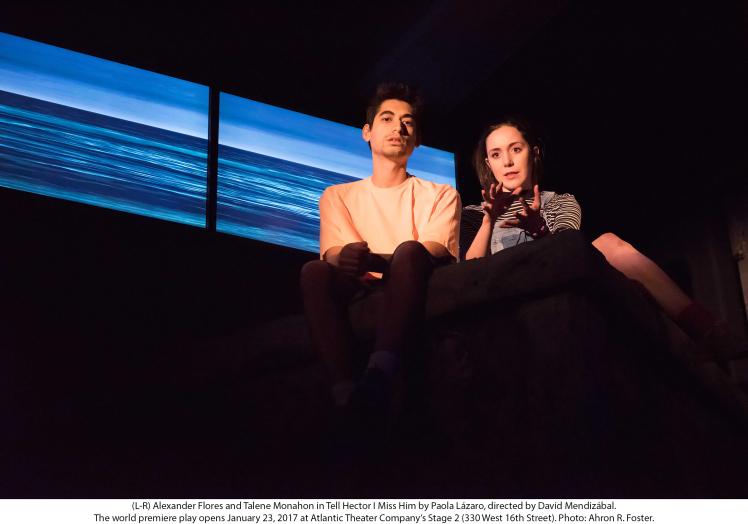 Tell Hector I Miss Him: And I Want More

Tell Hector I Miss Him: And I Want More 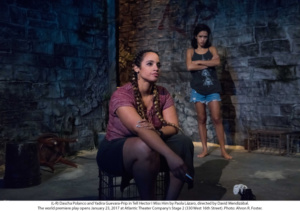 Paola Lázaro has a powerful voice. Her writing has an intensity of place and time. It flies at us in a way like no other I’ve heard on the stage recently. Her play, Tell Hector I Miss Him brings an authentic bilingual style and a sense of unique urgently to the Atlantic Theatre 2. It chronicles the day to day of a bunch of residents in a poor neighborhood in Puerto Rico, all of whom are dealing with survival, boredom, love, and lust.  In essence, this play is about sex, drugs, and salsa, as seen from a tour bus as we get to view a world we haven’t really had a chance to see before. The lives of this overly large assortment of characters criss cross in scene and scene from around this neighborhood, sometimes serious but also melodramatic ways. As directed by David Mendizábal, the overall effect is not as engaging as one would hope given the topics they cover.  The tour is too fast and too furious.  I just wanted the guide to slow down so we all have a chance to take in these vivid and eccentric characters in their quest for love, fulfillment, and survival. 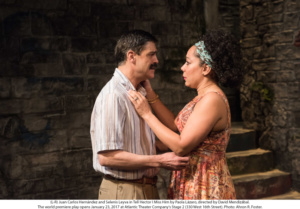 The video screens give us the beauty and serenity of ocean waves on a beach.  The view us tourists associate with Puerto Rico and want to see when we go there. It is calming, romantic, and engaging. Many of these San Juan residents though, have closed themselves off from these emotions; distancing themselves from the deeper feelings of love and engagement. There’s the odd creation of the tourist who meows (Talene Monahon) instead of speaking, which for the most part, doesn’t help us connect to her plight. And the cold young woman (an impressive piece of work by Analisa Velez) who casually uses a guy suffering from fetal alcohol syndrome (a sad but irritating portrayal by Sean Carvajal) for his drugs and money. It’s done in a sad, pathetic, detached manner, even though we see the internal conflict etched across her bored face. Others are more alive and engaged, like the brave upfront teenager (an impressive Yadira Guevara-Prip) in love/lust with the woman everyone wants (thrilled to see Dascha Polanco from OITNB doing great subtle work here). There is also the desperate-for-love drug dealer (an intense Victor Almanzar), using sex as his one and only way to connect with his overwhelming love and desire for a married woman (Selenis Leyva, wonderful and also from OITNB). 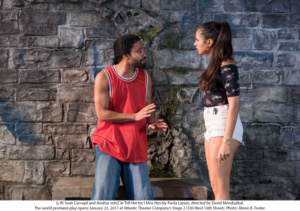 There’s a lot going on in the streets and in the store of Mostro (Juan Carlos Hernandez), the boring and controlling husband of the cheating wife. Their complex relationship never fully develops into a real enough emotional bond to cause us to invest or try to understand.  Some of these overlapping plots do resonate, but others, like the man who messed himself up on drugs (Flaco Navaja) and the street act/trick performer (another slightly too affected and irritating portrayal by Luis Vega) who befriends him fail to connect emotionally. The one beautiful moment is when they make you understand the title of the play.  For a moment we feel their inner yearnings, desires, dreams, and regrets. But the moment passes quickly. The writing and dialogue is sometimes too fast and furious, moving past moments as if the tour doesn’t have enough time to dig deep.  This is most evident with the messed up son, and his alcoholic mother storyline (Alexander Flores/Lisa Ramirez). This story should have been much more devastating than it was in the end, but like most of these relationships, the fault lies in the exploration rather than the delivery.

This sums up the over all impact of Tell Hector I Miss Him, I wanted to dig deeper into some of these stories, and flesh them out.  I wanted to try to get a more rounded understanding of what lies underneath their stoic exterior. Much like the cold hard stone of the dense plain prison wall we stare at over the course of this two hour + play (an effective but dull design by set: Clint Ramos; costume: Dede M. Ayite; lighting: Eric Southern; sound: Jesse Mandapat), the play doesn’t sustain the whirlwind of ideas and scenarios.  Some of these story lines could have been dropped so that others could have been given more time to deepen.  The play definitely feels like it’s coming from an authentic attachment to character, location, and style.  We are seeing a world pulled from Lázaro’s experiences, but she hasn’t been able to draw us in consistently.  I wanted this Puerto Rican tour to slow down so we could engage and converse with that impressive assortment of real life residents. I wanted more.