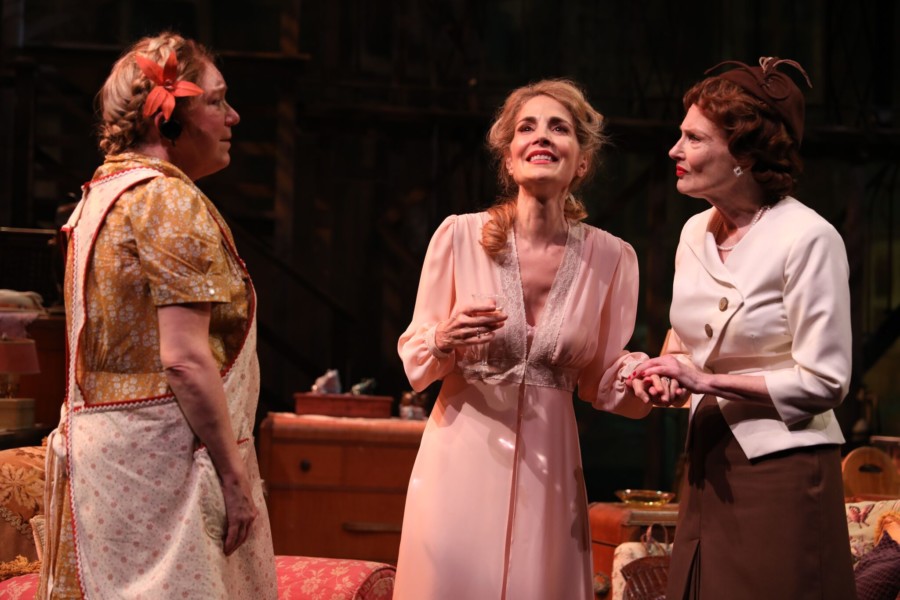 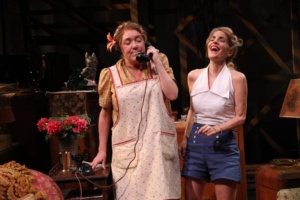 Tennessee Williams’s A Lovely Sunday for Creve Coeur, directed by Austin Pendleton and starring Kristine Nielsen, Annette O’Toole, Jean Lichty, and Polly McKie is being given a rare revival at St. Clement’s. French for heartbreak, Creve Coeur is the name of a park in St. Louis and the women in this story all are suffering from some form of loss. Creve Coeurwas written as a one-act play in 1976 as a companion piece to Demolition Downtown, a short work that had been published in Esquirein 1971. It was given a reading in 1977 by Craig Anderson at the Hudson Theatre Guild, and in June 1978, titled Molly, Shirley Knight starred as Dorothea with Jane Alexander as Helena in London. Knight reprised her role when the show opened at the Hudson Guild Theatre in January 1979, but the play only lasted a month. 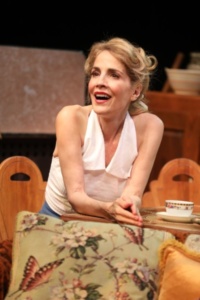 Set in St. Louis, 1937, we meet four very different women. First up is the middle-aged civics teacher, Dorothea (Jean Lichty), a Blanche DuBois type before Streetcar, who longs and believes because she gave herself over to the high school principal T. Ralph Ellis, that this is a real relationship. Her good-hearted, hard-of-hearing roommate, Bodey (an animated Kristine Nielsen) wants desperately to hook up Dorothea with her twin brother, Buddy, despite the fact Dorothea is animatedly against this. Dorothea (who originally hails from the Deep South) does her exercises while awaiting a phone call from Ellis, as Bodey prepares for a matchmaking picnic at Creve Coeur. When Dorothea’s colleague, Helena (Annette O’Toole), enters, sparks fly. Bodey knows Helena is up to no good and the high-strung, manipulative Dorothea is keeping secrets from everybody. When their upstairs neighbor, Sophie Gluck (Polly McKie) descends, madness is apparent. Sophia is a manic-depressive, German immigrant mourning the loss of her beloved mother. When Helena reveals to Dorothea that Ellis has just become engaged in the society section of the morning newspaper, Dorothea realizes that Buddy, as unappealing as he is, may be her only chance for love. 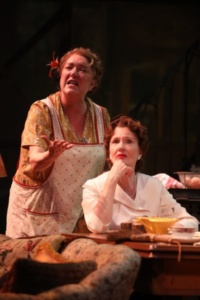 Nielsen, O’Toole, and McKie all play their roles like caricatures of women and it doesn’t always work. Nielsen is hysterical with her quick one-liners and really knows how to deliver a line while managing a sincerity to it all. We feel for her. O’Toole’s role is like Rosemary Sydney in Inge’s Picnic. I wanted to see more of the pain she hides underneath her snooty attitude. Lichty is the perfect Blanche but speaks way too softly. 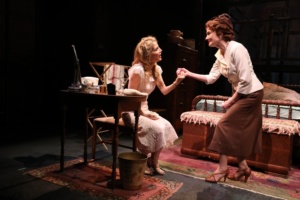 Austin Pendleton brings some umps to this play, but it really is a one-act and it seems to drag on just a little bit longer than it should. 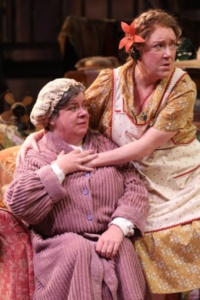 Harry Feiner’s set is seriously wonderful, but it seems lacking when matched against the dialogue. It is overstuffed, but not garish enough; however, his lighting is perfection. Beth Goldenberg’s period costumes really work for each character.

This is a play every Tennessee Williams fan will and should see. Though I found this one act lacking in fleshing out these characters, it did make me want to see a play about four women, in different decades, dealing with never having the prospect of being married, having a family, and being alone. Times have changed, but the way we have been raised to be in a society where marriage is the norm still takes its toll. It could be highly interesting to see the evolvement of women in society and how circumstances have changed.