Terezin. A Confusing Look at the Holocaust

Terezin. A Confusing Look at the Holocaust 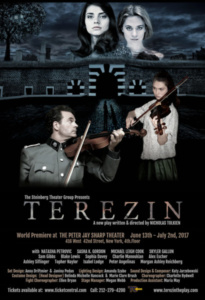 As a child, my favorite book was “I Never Saw Another Butterfly.” It was the poems and the drawings of the children of Theresienstadt. It was filled with hope and life, despite the fact that the contents were born out of the atrocities of a concentration camp. Since that book, I have had a special place in my heart and sought to know more about the horrors of the Holocaust.

Now playing at the Peter Sharp Theatre is Nicholas Tolkien’s Terezin, presented by The Steinberg Theatre Group. Tolkien’s claim to fame is that he is the great-grandson of J. R. R. Tolkien. Not only is he the author but also the director, and neither of which does he do well. 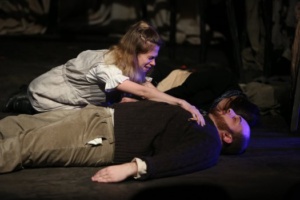 For over two and half hours this over-stuffed, confusing mess of a play, struggles to find its ground. The basic premise follows two young girls, Violet (Sasha K. Gordon) and Alexi (Natasa Petrovic), who have lost their mothers and in Violet’s case, both her parents. The camp’s head SS Nazi commander Karl Rahm (Michael Leigh Cook), had a thing for Alexi’s mother who was a classical violinist. When Violet disappears Alexi, also a violinist, is forced to teach the captain to play, to disastrous results. In the meantime, the Dutch Red Cross comes for a visit and are duped into thinking this is a model place to live. We see the pain of the young girls forced to strip naked and go for a swim, while the Nazi’s film them for a documentary. The Nazi commander has also raised a Jewish child in secret who is now a grown man. Eric (Skyler Gallum) is an architect who has been hired to expand the camp. He went against his father’s wishes and married a Jewish woman and they had a daughter, whose fate we learn at the end. As Eric learns the fate of those at the camp, he hides Violet and then another child in a treehouse. The sadistic SS Officer Udo (Blake Lewis) discovers his secret. In the end they use a butterfly made out of foil to illicit an emotional response from the audience, which has not been earned. There are also historical problems with this work.

The cast is terribly uneven. Ms. Gordon comes off as a belligerent, spoiled, willful, child and it is hard to believe anyone would have been allowed to act like her and live. Ms. Petrovic has a lovely serene quality and we see the layers of her pain, as well as her compassion for the younger Violet. Also, Mr. Lewis shows the sickness that lurks behind men who have been driven or have always been insane with power and hate. He also has a perfect German accent.

Even the directing here is odd, as the actors mime playing violin by stretching gauze along their bodies and then arms stroking rather seductively. The gauze is used several times to draw people on and off stage, this like a dance, choreographed by Charlotte Sydwell. This just makes the piece even more confusing.

Anna Driftmier’s set also makes no sense, looking like a ruined graveyard with pipe-like trees. Marie Clare Brush’s costumes and Amanda Szabo’s lighting and projections are one of the few things in this production that actually work.

Plays about the Holocaust are important so we never forget, but that doesn’t mean we need to forget artistic integrity.

RossNovember 16, 2022
Read More
Scroll for more
Tap
Marvin’s Room: Across the Great (but too vast) Divide
In A Word: Slow Down, Settle Down Son