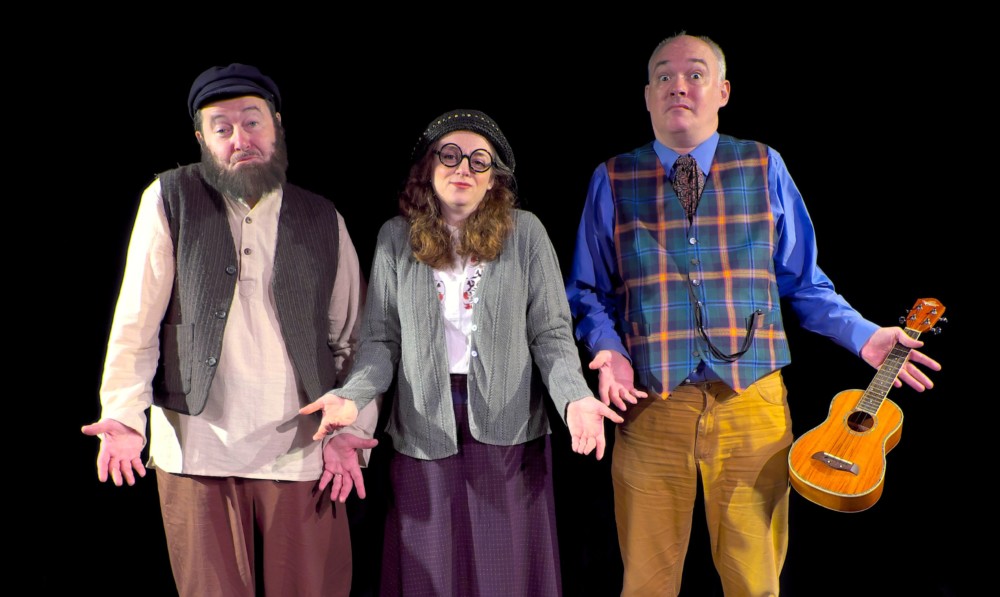 Tevye Served Raw” Is A Treat for “Fiddler on the Roof” Fans, And Others

Tevye Served Raw” Is A Treat for “Fiddler on the Roof” Fans, And Others 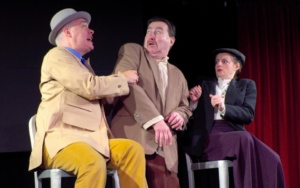 A “baloney artist” on a train, an evil stepmother who curses angrily, a hapless traveling business man – these are just some of the characters that comprise “Tevye Served Raw,” a play depicting original stories by Sholem Aleichem, the man whose work is the basis for “Fiddler on the Roof,” the award-winning and decades-long running Broadway musical. 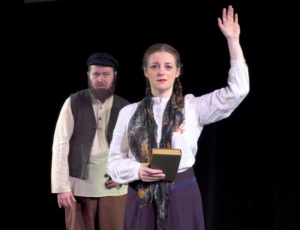 In Tevye Served Raw, we witness the authentic, day-to-day life of Aleichem’s characters without the musical flourishes, but not without the humor. This of course includes more stories about Tevye, the dairyman from the musical itself. 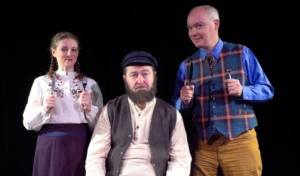 The play begins with informing the audience that Tevye was a real person whose stories Aleichem recorded. The actors make it clear that Aleichem was an observer of the everyday characters around him, and his work seeks to tell those real-life stories. The play then consists of vignettes, both funny and tragic, of stories taking place in Tevye’s family and city. 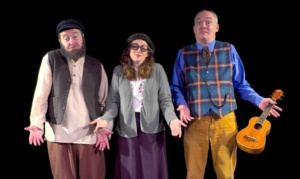 The actors excel not only in comedic expression, but also in layered performances, so that the play does not merely portray Jewish archetypes. Instead, it hones in on day-to-day Jewish life in Eastern Europe in the late 19th and early 20th centuries. This is done with great wit and animation by Yelena Shmulenson (“Orange is the New Black”), Allen Lewis Rickman (“Boardwalk Empire”) and Shane Baker, a Yiddish theater star who also happens to be Episcopalian.

The players introduce us to vividly memorable characters, like the town gossips who try to pry information out from one other, the wife and mother who sings her child to sleep with songs of money her husband will send from America, and Tevye’s daughter, who falls in love with a Christian.

One of the greater strengths of the play is the animated gestures during Yiddish conversations, both at the hands of the characters and the translator standing between them. This lends the piece with a humor that is both Jewish and relatable to general audiences who most likely wouldn’t know Yiddish. This starts with Rickman when he enters the stage as Tevye. The actor conveys Tevye’s humble position and the humor that will color the rest of the play with expert use of body language.

We later see longer conversations whose humor is also not lost in translation as the actors expertly tell stories that are both universal and specific. It’s easy to understand that “who knows” shrug after a heated argument between gossips who are a bit too curious about the richest Jewish man in town Then there’s the nagging finger of a frustrated wife toward her naive, hapless husband as he lazily pulls his suspenders while daydreaming about his next likely-to-fail European business venture. And of course, who doesn’t like to learn curses in a new language? One highlight of the play is when Shmulenson’s evil stepmother character, with the help of Rickman as translator, teaches the audience how to insult someone in Yiddish with shouts of “non kosher intestine!” and “man who shoots at lampposts!”

The more serious turns the play takes are inevitable, as institutionalized racism at the hands of the state and church was interwoven with the daily life of people like Tevye, his wife, Golde, and their daughters. Anti-Jewish laws of the day ruled where one could live and work and whom one could marry. The audience gets a sense that people like Tevye face the risk of losing family and home at the whim of state and religious authority. These stories make the humor in the play more poignant as the audience sees the usefulness of comedy when daily existence and survival is made difficult by the powers that be.

In one especially powerful scene, Baker shines when depicting an Orthodox priest whose racism cannot be contained by his God during a confrontration with Tevye. Even after Tevye’s wife implores her husband to not say anything rash, his tension and frustration rushes in like a tide, and the institution renders even a strong father and husband powerless.

However, the overall humorous tone of “Tevye Served Raw” lets the audience know that hope – and faith that better days are waiting – are never lost in Tevye’s world.

Tevye Served Raw is a good choice for those looking for a fun evening that also provides a bit of depth and history. The play is being staged by The Playroom Theater until August 14, with tickets available at TevyeServedRaw.com.

Genevieve Rafter KeddySeptember 14, 2022
Read More
Scroll for more
Tap
Meet The Playwrights of NY SummerFest: Pamela Scott Has Not One But Two Plays in Festivals
Arts Emerson Finds Itself Born For This