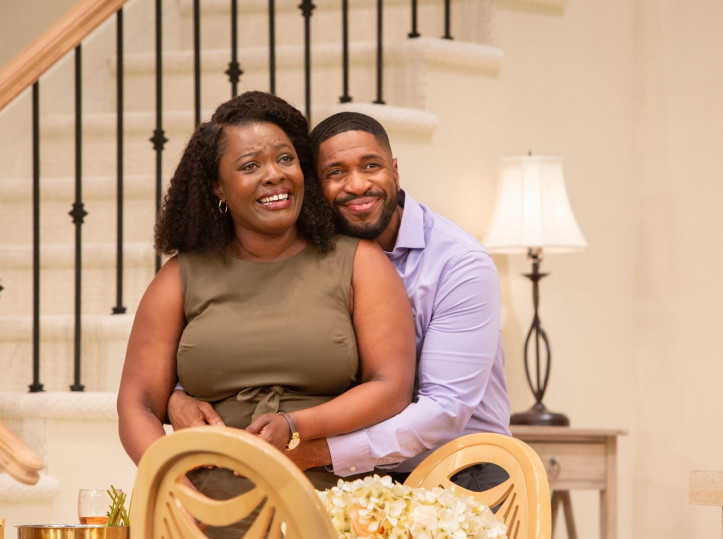 Don’t be fooled into easy submission. That’s my first warning when attending this utterly fascinating and forceful play. Like a good food fight, it wildly throws out implied conventions and disturbing vantage points, easing the audience into calm capitulation by serving up stereotypical behavior to a stereotypically accepting audience and then twisting the tale on its dancing and singing head. Inside Fairview, Jackie Sibblies Drury’s complicated and multi-layered Pulitzer prize-winning play, the tide turns, very uncomfortably, becoming something quite different than we first comfortably imagine. It transitions dramatically into a heady examination of race, strongly held expectations, and white privilege. Layered on top is an upsettingly accurate internal dialogue of observers tracking inside something that resembles an insulting talk radio show laced with disturbing racial blindness and obliviousness. The shock of the depth of insulting misinformation is rough to hear, and blazingly authentic. The four find their way onstage, pushing forth a diatribe to poke hard at the reversing of color blind casting and stereotypes that sit inside.

The construction is radical and wise, etched with humor and clarity of vision. With a strong cast of actors pseudo-sublimating us into passivity on a strongly accented set designed with a reversing sense of purpose by Mimi Lien (RTC’s True West), spot-on lighting by Amith Chandrashaker (Signature’s Boesman and Lena), strong sound by Mikaal Sulaiman (Atlantic’s Blue Ridge), costuming by Montana Levi Blanco (New Group’s Daddy) and eccentrically thoughtful properties supervision by Ryan Courtney (Soho Rep’s Passage), Fairview shocks and excels in ways you reluctantly want to participate in. Pulled out of our comfort zone seat by the determined MaYaa Boateng (Signature’s Fabulation,…) as young ‘eyes wide open’ Keisha, with compelling support by the others in the phenomenal cast: Charles Browning (Virginia Stage’s I Sing the Rising Sea), Hannah Cabell (Broadway’s The Father), Natalia Payne (RTC’s The Last Match), Jed Resnick (Broadway’s Avenue Q), Luke Robertson (Atlantic’s Good Television), Roslyn Ruff (Broadway’s All the Way), and Heather Alicia Simms (Public’s Barbecue); Fairview smashes triumphantly at her command. As directed with resolution and unabashed confidence in the collective by Sarah Benson (Soho Rep’s An Octoroon), with choreography by Raja Feather Kelly (Atlantic’s Fireflies), the piece pounds us forward dramatically, challenging us to overcome. I won’t ruin the experience by saying any more, as the weight is felt more covertly by the unknowing ones, and the power by the open hearts.

To enter innocently into the birthday dance of critical thinking, is the way to racial enlightenment. It’s clever in its cake-walked rotations asking us to look into the something that is keeping us from being who we really need to be, or at least how we need to alter our perceptions. It’s “a family affair”, this Fairview, but one that is bigger and has its eyes on a horizon that is as blurry and distressing as a deer ‘caught in the spot lights’ of theatre creationism. This “history lesson of a person”, regardless of race, is extremely successful in its doctrine, relentlessly forcing the audience to look out at themselves through inner dialogue and outer experiential re-positioning with the hope of a new, although uncomfortable perspective of a future unlike the thing we first expected.