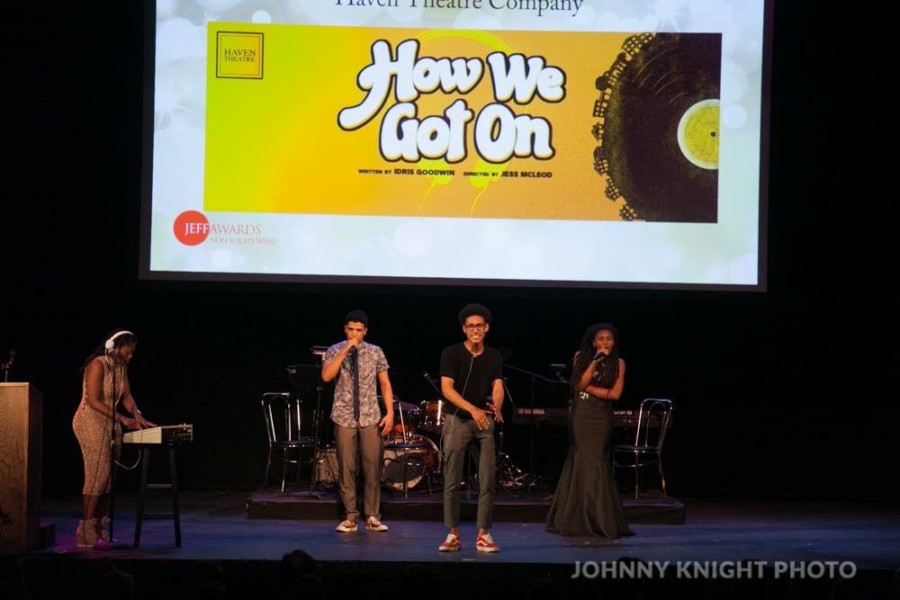 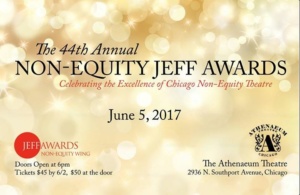 Logo Photo from the Night

Monday night saw Broken Nose Theatre and Refuge Theatre taking the top honors at The 44th annual Non-Equity Jeff Awards held at the Athenaeum Theatre. Celebrating non-union Chicago theatrical productions, the award’s wealth was spread to 19 different shows in 26 categories. The biggest winner of the night was At the Table, created by Broken Nose Theatre, which received four awards total including Best Production – Play, Best Ensemble, Best Director for Spenser Davis and Best Actress in a Supporting  Role – Play for Echaka Agba. In the musical category, Refuge Theatre’s High Fidelity: The Musical walked away with Best Production – Musical, Best Director for Christopher Pazdernik and best Scenic Design for Michelle Manni. The 55 men and women making up the Jeff Committee each share a passion and respect for theatre and hand-selected David Cerda from Hell in a Handbag Productions as the recipient of the 2017 Non-Equity Special Award. Cerda was allowed to speak longer than the evening’s requisite 30 seconds and joked early on in his speech “I do deserve it.”  Switching to a more serious tone, he shared his love for the genre.  “There is always hope no matter how hopeless things seem.” Through the performing arts “I discovered I mattered… and theater saved my life.” Closing his speech he reminded a room full of his Non–Equity colleagues to “pay your people a livable wage” which was met with thunderous applause. 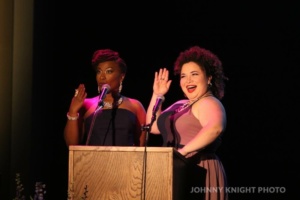 Alexis J. Roston and Lillian Castillo played hostesses for the evening, cracking jokes and keeping the pace of the evening flowing. The casts of The Wiz, How We Got On, Northhanger Abbey, The Most Happy Fella, Urinetown, and High Fidelity: the Musical reunited and took to the stage one more time performing selections from each of their nominated shows. Award highlights of the evening included John Nasca winning his second consecutive award for Costume Design for Pride Films and Plays’ Priscilla: Queen of the Desert, Ike Holter’s  powerful Prowess taking home two awards, including Best New Play, double nominee Henry McGinniss winning Best Actor in a Principle Role –Musical for Bay Boy: The Musical  and a surprised Veronica Garza breathlessly taking the Best Actress in a Supporting Role Musical trophy for her dual role in Underscore Theatre Company’s Tonya and Nancy: The Rock Opera. “Comedy is my way of fighting hate” she shared, her cheeks as bright pink as her jumpsuit. 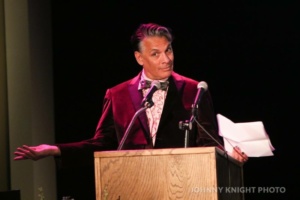 Special tributes were also offered for Windy City luminaries Samuel Roberson, “art is about changing lives for the better” and Steppenwolf’s incomparable Martha Lavey. Standing ovations for each, honoring their lifetime commitment to improving the industry they both so cherished. Under the direction of Brenda Didier and musical direction by Jimmy Morehead, the 44th annual Jeff Awards concluded with a reception and photos of the winners and nominees in the Athenaeum Theatre’s gallery.  The full list of the evening’s winners are listed below. 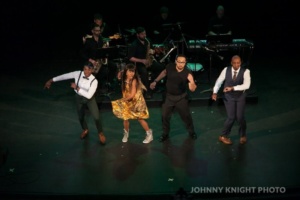 The cast of Kokandy Production’s The Wiz (Group of four, Sydney Charles in yellow dress

At the Table; Broken Nose Theatre

At the Table; Broken Nose Theatre

ACTOR IN A PRINCIPAL ROLE—PLAY Tie

ACTOR IN A PRINCIPAL ROLE—MUSICAL

ACTRESS IN A PRINCIPAL ROLE—PLAY

ACTRESS IN A PRINCIPAL ROLE—MUSICAL

ACTOR IN A SUPPORTING ROLE—PLAY

ACTOR IN A SUPPORTING ROLE—MUSICAL

ACTRESS IN A SUPPORTING ROLE—PLAY 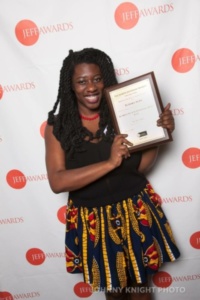 Best Actress in a Supporting Role – Play Echaka Agba; At the Table

ACTRESS IN A SUPPORTING ROLE—MUSICAL 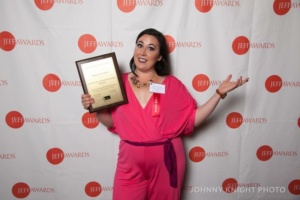 ACTOR/ACTRESS IN A REVUE 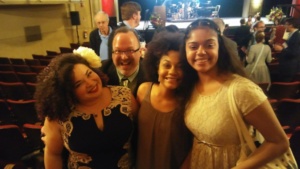 ORIGINAL MUSIC IN A PLAY

Stephen Ptacek; How We Got On; Haven Theatre Company

Anthony Churchill; The Body of an American; Stage Left Theatre

Calling All Singers
This Summer Where New Musicals Begin