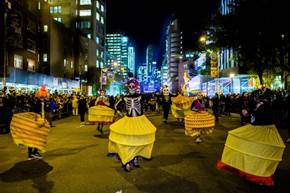 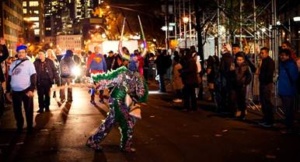 New York City’s much anticipated 44th Annual Village Halloween Parade announced that this year’s theme will be: “Cabinet of Curiosities: An Imaginary Menagerie”— celebrating the hybrids, mash-ups, and frisson of crossed identities we allow ourselves to be for on one special night in October. We are thrilled to announce recording artist, Anjelica, as this year’s Grand Marshal. The Village Halloween Parade has long supported upcoming young artists, and we are very excited to have Anjelica riding our first-ever “New Orleans style” float, designed by the gifted Russian artist, Alexei Kazantsev.

Inspired by PT Barnum, founder of the famous Barnum and Bailey Circus and his interest in Crypto- zoology (the study of folkloric creatures), and legendary author Mary Shelley, this year’s parade is set to surprise you in the best way possible. The story of the ultimate spooky hybrid, Frankenstein, written by Shelley in 1818, is coming up on its bicentennial birthday and the 44th Annual Village Halloween Parade will celebrate the spirit of Shelley and her most famous work. Puppets inspired by such cryptozoologic creatures as Sasquatch, the Loch Ness Monster, and Chupacabra and a cortege of Pink Elephants will lead the parade, animating the streets of the West Village far beyond anyone’s expectations.

“The Cheshire Cat famously says, ‘Imagination is the best defense against reality.’ Imagination and curiosity are an incredibly important part of making the world a better place, and that is where the inspiration for this year’s theme came from. PT Barnum and Mary Shelley’s unparalleled ideas shaped stories that have endured the test of time. We are thrilled to be able to celebrate the magical spirit of Halloween through their ideas in New York’s very own Imaginary Menagerie,” said Jeanne Fleming, artistic and producing director of the Village Halloween Parade. “Anjelica is unbelievably talented and the perfect choice for Grand Marshal. We very much look forward to having her incredible energy and stand-out ideas for her presentation lead the parade this year”

The legendary Village Halloween Parade event has entertained the public on Halloween night for the past 43 years, attracting millions of people from around the world. The Parade will showcase hundreds of puppets, 53 bands spanning all genres of music, dancers, artists and thousands of New Yorkers and out of towners donning costumes of their own creation in the nation’s largest public participatory event in the city that never sleeps–or if it does sleep, it dreams!

BroadwayCon: BroadwayCon Star To Be Competition Partners With The Jimmy Awards
George Wendt Reprising His Role as Santa in Elf at Madison Square Garden