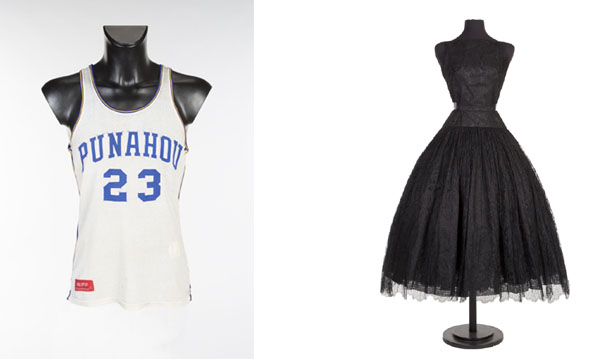 Julien’s Auctions announced today that two spectacular and historic items from the life and legacy of the Obama family have been added to their highly anticipated auction season.

Bou School as a member of the 1979 Hawaii State Champion boys’ varsity team. The jersey in itself represents the leadership and competitiveness he brought as a basketball player to become the President of the United States (photo left: 1979 yearbook photo of Obama in his #23 jersey playing basketball)In Obama’s memoir, Dreams From My Father, he writes, “At least on the basketball court I could find a community of sorts, with an inner life all its own. It was there that I would make my closest white friends, on turf where blackness couldn’t be a disadvantage.” It was through basketball that Obama explored his racial identity and his love for the game which would become a touchstone throughout Obama’s personal life and presidency. (photo bottom right: 1979 yearbook photo of Obama seated top right with basketball team)

At the start of Obama’s first term, the White House tennis court was converted to a basketball court where he could be frequently seen playing pick-up games against NBA players and politicians alike. He remains the only American president to have participated in a team sport while serving in the White House. The Rawlings size 40 white mesh pullover features “PUNAHOU” and the number “23” on the front and reverse side with yellow and blue stripes, Punahou’s school colors. The historic game worn jersey and rare piece of American presidential history is estimated to sell at $150,000-$200,000 and is accompanied by a 1979 Punahou school yearbook, which includes photos of Barry Obama playing basketball in the same jersey.

As the nation’s first African-American president, Obama’s historic election into office and his two-term presidency sparked hope and change around the world. With wife, First Lady Michelle Obama and their two daughters Sasha and Malia, the Obama family left an enduring legacy of dignity and grace during their eight years in the White House.

Julien’s Auctions is proud to offer for the first time at auction a dress worn by the former First Lady: the black vintage Norman Norell cocktail dress worn by First Lady Michelle Obama to the reception for Christmas in Washington, a star studded televised charitable fundraiser and musical celebration of the holidays held December 12, 2010, at the National Building Museum in Washington, D.C. The headline making dress became a viral media sensation around the world and was reported by People, The Huffington Post, The Telegraph as well as late night TV shows, broadcast news and more to be the first time a First Lady had ever worn a vintage couture dress in public.

This circa 1950s dress with a fitted bodice, black satin straps and a silk organza tea-length skirt over an attached silk crinoline petticoat with multiple layers of tulle is estimated to sell at $50,000-$70,000. It will headline Julien’s Auctions ICONS & IDOLS TRILOGY: HOLLYWOOD taking place Sunday, December 6th, 2020, live in Beverly Hills and online at www.juliensauctions.com. The dress created by Coty Award winning designer Norman Norell was provided to the First Lady by renowned fashion house New York Vintage. Norell, known as “The Dean of American Fashion Designers,” had a successful five-decade career that began in the 1920s where he designed costumes for Paramount Studios in New York, for the likes of Gloria Swanson and Rudolph Valentino and fashion for Hollywood stars to wives of industrialists and politicians.