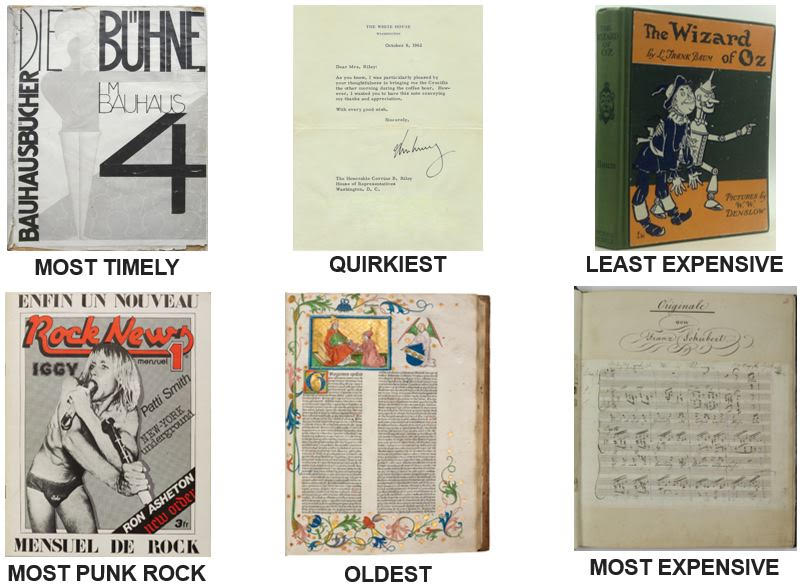 We’ve combed through this year’s exhibitors and wanted to share some highlights that cannot be missed!

Most Timely
Just in time to celebrate Bauhaus’ 100th anniversary, a copy of the original Die Bühne im Bauhaus signed by author Oskar Schlemmer is being brought to the public market. Originally published as a textbook for the students of Bauhaus, Die Bühne im Bauhaus will be on view at Daniela Kromp Rare and Unique Books.

Quirkest
Stuart Lutz is bringing a unique letter signed by “John Kennedy” he wrote to Congresswoman Corrine B. Riley of South Carolina, thanking her for bringing him a Crucifix a week before the Cuban Missile Crisis began. There are almost no presidential letters mentioning his Catholicism, making this a rare find!

Most Expensive
The crown jewel of this year’s fair is hoping to break the record for most expensive sale – priced at €1,800,000 ($2,034,000 USD)! Kotte Autographs is exhibiting an extraordinary personal collection of 115 musical manuscripts signed by the foremost Austrian musicologist of the 19th century, Aloys Fuchs. The works focus on the Viennese musical scene, including Beethoven, Chopin, Liszt, Lortzing, Bartholdy, Schubert, &Schuman.

Least Expensive
Kubik Fine Books will focus much of their booth space this year on “Books for Budding Collectors,” an assortment of books priced at $100 or less! The collection features some of the highlights of the fair – including a first edition copy of The Wizard of Oz.

Most Punk Rock
Arthur Fournier is presenting a complete run of the proto-punk music fanzine Rock News International from January 1976 through September 1976. Published from Paris via New York by the founders of the legendary Parisian record shop Harry Cover, they document punk’s emergency on the NYC scene.