The 65th Annual Drama Desk Awards and the Winners Are… 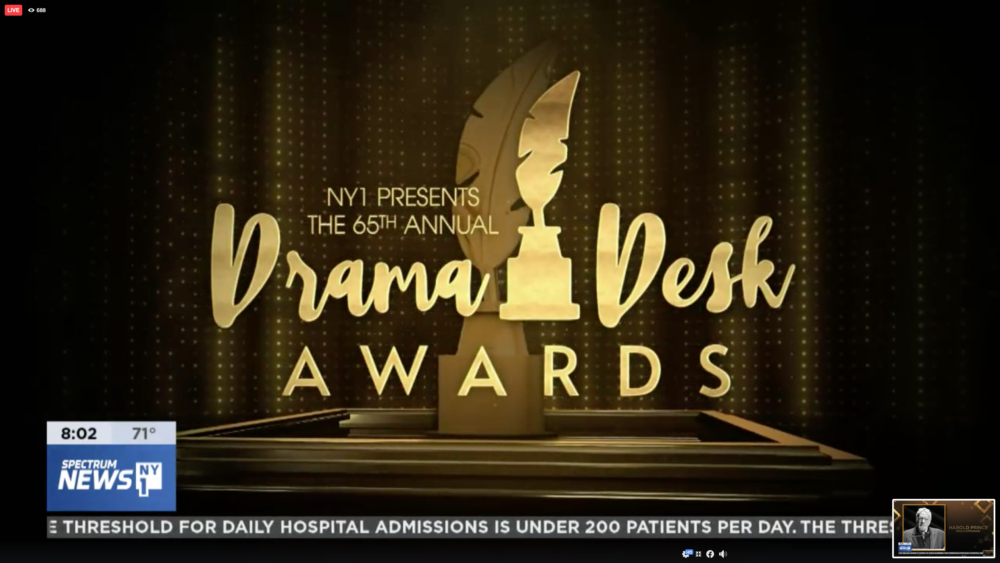 The 65th Annual Drama Desk Awards and the Winners Are…

Finally after a delay the 65th Annual Drama Desk Awards hosted by Frank DiLella on NY1 took place. The show was well done and made you feel as if you were at a real awards show. Bravo NY1!

An array of stars gave out the awards including: Tituss Burgess

and five-time Drama Desk Award winner Susan Stroman gave out the award to Hal Prince. The Drama Desk Awards’ first-ever lifetime achievement honor. The Harold Prince Award will be bestowed annually for outstanding contributions to theater, and this year will be awarded posthumously to Mr. Prince. Prince passed away on July 31, 2019 at the age of 91.

The winners for the 65th Annual Drama Desk Awards are:

Outstanding Revival of a Musical: Little Shop of Horrors

Outstanding Actor in a Musical: Larry Owens, A Strange Loop

Outstanding Featured Actor in a Play: Paul Hilton, The Inheritance

Outstanding Featured Actress in a Play: Lois Smith, The Inheritance

Outstanding Director of a Play: Stephen Daldry, The Inheritance

Outstanding Director of a Musical: Stephen Brackett, A Strange Loop

Outstanding Music in a Play: Martha Redbone, for colored girls who have considered suicide/when the rainbow is enuf

Outstanding Costume Design for a Play: Rachel Townsend and Jessica Jahn, The Confession of Lily Dare

Outstanding Lighting Design for a Play: Heather Gilbert, The Sound Inside

Outstanding Sound Design for a Play: Paul Arditti and Christopher Reid, The Inheritance

Unique Theatrical Experience: Is This A Room, Vineyard Theatre

Sam Norkin Award: To actress Mary Bacon, who continued her versatile career of compassionate, searing work for such companies as The Mint, Primary Stages, The Public Theater, and The Actors Theater Company, with two of Off-Broadway’s most humane performances this season in Coal Country at the Public Theater and Nothing Gold Can Stay presented by Partial Comfort Productions.

To The Public Theater’s Mobile Unit, a reinvention of Joseph Papp’s “Mobile Theater” that began in 1957 and evolved into the New York Shakespeare Festival and The Public Theater. The current Mobile Unit tours free Shakespeare throughout the five boroughs, including prisons, homeless shelters, and community centers, reminding audiences new and old that the play really is the thing.

To WP Theater and Julia Miles, the company’s founder who died this spring. Formerly known as The Women’s Project and Productions, the company began in 1978 at American Place Theatre, where Miles served as associate to visionary artistic director Wynn Handman, who also died this spring. WP is the largest, most enduring American company that nurtures and produces works by female-identified creators. Over a little more than four decades, it has changed the demographics of American drama through an unwavering focus on women writers, directors, producers, performers, and craftspeople.

To Claire Warden for her pioneering work as an intimacy choreographer in such recent projects as Frankie and Johnny in the Claire de Lune and Linda Vista, and her leadership in the rapidly emerging movement of intimacy direction. As part of the creative team of Intimacy Directors & Coordinators and Director of Engagement for and co-founder of Intimacy Directors International, she is helping create theater experiences that are safer for performers and more authentic for contemporary audiences.

Suzanna BowlingMay 9, 2022
Read More
Scroll for more
Tap
Victoria Clark Answers The Tough Questions As She Runs For The Board of Actors’ Equity
In Memoriam: The Drama Desk Pays Tribute