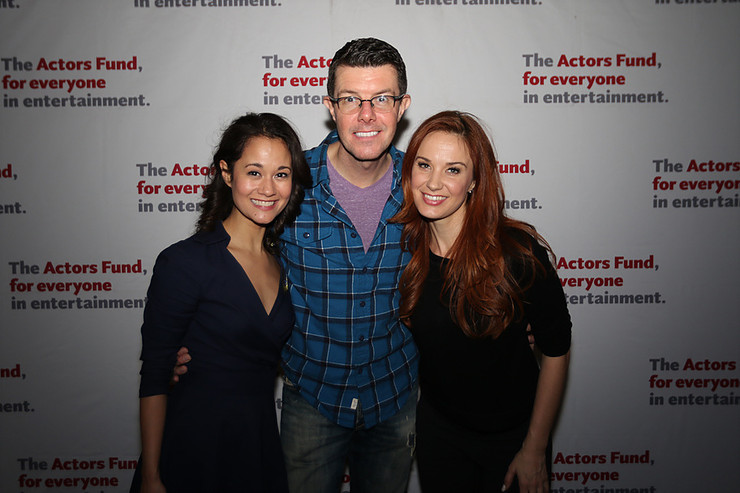 Grammy Award® and Emmy Award®-winner John McDaniel wrote new orchestrations for the score and served as the evening’s music director. The score was incredible executed by the masterfully 28 piece orchestra. The magical sound filled the theater with a wide range of emotions that matched the narrative. Opening with “It’s Great to Be Back on Broadway” gave us a high spirited start. Jules Styne and Bob Merrill’s score, has always been a smart, clever and infectious musical tribute that has stayed in the minds of those who saw this cartoon version for years.

The choreography by Nathan Peck, were based on original choreography by Marcos Santana. The remarkable set changes were turned into dance as The Winter Wind – a talented group of dancers clad in black with flowy fabric draped from the arms – pranced about in wonderful rhythm, so smoothly that the viewer barely noticed that they were changing the sets. Dances around the scene at Fezzywig’s Christmas Party brought all of the excitement of a Merry Christmas in jolly olde England straight to the stage.

Gavin Lee’s (Bert – Mary Poppins, Squidward Tentacles – SpongeBob), acting drew me into the story to the point that I deeply felt Ebeneezer’s emotions. His rubbery body and cascading emotions were a joy to behold. He was a fabulous Scrooge. His “Ringle, Ringle”, each time it was sung gave those emotional tugs an even deeper pull.

One of many many highlights of the evening was the performance by young Shane Pry as Tiny Tim. He made “and razzle berry dressing” stand out in “The Lord’s Bright Blessing”. This young star even knew to turn his head to the audience when being turned towards the back of the theatre.

Newcomer Joshua Turchin (Forbidden Broadway) gave a heartfelt performance in “Alone in the World” as a young Ebenezer, as Ali Ewoldt gave us warmth as Mrs. Crachit.

Sierra Boggess, (Ariel – The Little Mermaid, Christine Daae – Phantom), was a lovely Belle with her soprano voice hitting all the right notes on “Winter Was Warm”.

But it was Klea Blackhurst as the Charwoman, Jennifer Cody as the Laundress, Jeff Blumenkrantz as the Undertaker, Stephen DeRosa as The Old Man, who stole the show with “We’re Despicable (Plunderer’s March)”

Carl Andress direction made this a night to remember and it was clever that the set was a video of the original show minus the cartoon actors. Kudos to all those who did lighting, hair, make-up, sound, scenic design, and projections. This were jobs well done.

Charles Dickens A Christmas Carol is one on my all time favorite novels and Christmas tales. I know many of the lines by heart, from “Marley was dead to begin with” to “God Bless us everyone” to ” you there boy in the street what day is it? – Why day sir? Why it’s Christmas Day”.

I have most likely watched every movie and cartoon version as well, as having seen many stage adaptions over the years. This past weekend I traveled to PA to see a one man show Reading of the novel by none other than the great-great-grandson of Charles Dickens. That show was exceptional in its own right.

Last evening’s production benefiting The Actors Fund was hands down my all time favorite adaptation. All I can say is spectacular, incredible, well Done! This performance was so well played, that it actually brought me to tears not once, but three times. Twice as the ghosts visited Scrooge and at the end as Scrooge emerges as a truly changed man. Not what I was expecting from a Mr. Magoo version of A Christmas Carol.

The only downside to this production was that it was limited to a one night only performance. Hats off to all those who donated their time and the patrons that came out to support a great cause. It is hard to work for free in this economy, so one night only doesn’t allow to shout what an exceptional experience this was. I personally hope that next year we see at least a three day run, if not a production like this on Broadway.

The Actors Fund President and CEO Joseph Benincasa and friends on the red carpet. (Photo by Brian Hester) As added bonus coverage we have included an album of downloadable / shareable photos of many of the child actors that donated their time. Click here to see those photos.

The Actors Fund fosters stability and resiliency, and provides a safety net for performing arts and entertainment professionals over their lifespan.

Founded in 1882, we serve all professionals—and not just actors—in film, theater, television, music, opera, radio and dance through programs that address our community’s unique and essential needs.

Employment in any division of the performing arts and entertainment industry is unpredictable. Work is erratic, security is fleeting and health insurance is often just a dream. For all of these reasons and many more, The Actors Fund is an indispensable and deeply significant part of the entire entertainment community.

As a national organization with offices in New York, Los Angeles and Chicago, we directly serve thousands of performing arts and entertainment professionals across the country every year, in person and via our online resources. Our programs are wide in scope, responsive in nature and produce significant results. To Donate Click Here