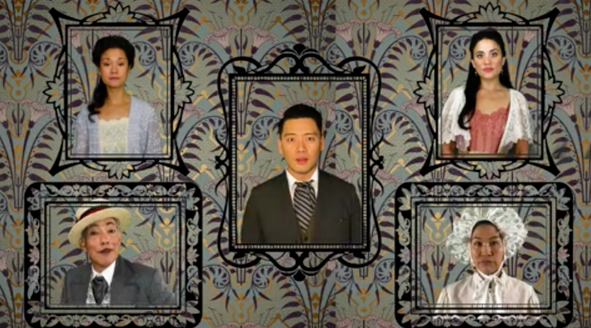 CollaborAzian has gathered Asian American musical theatre artists to responded to the rise of anti-Asian bias, prejudice, and hate. Today, Asian Americans are experiencing a cultural change like never before in American history. Using their voices as artists to add to the conversation of what it means to be Asian in America right now comes an All-Asian American production of A Gentleman’s Guide to Love and Murder.

Proceeds from this online concert will benefit Stop AAPI Hate, a nonprofit coalition that tracks and responds to incidents of hate, violence, harassment, discrimination, shunning, and bullying against Asian Americans and Pacific Islanders in the United States. Learn more about their vital work at www.stopaapihate.org.

Karl Josef Co (Pacific Overtures) plays Monty Navarro a sweet baby-faced killer who convinces not one but two women to love him and lie for him and just like J. Pierpont Finch, he murders his way up the tower of success. This operetta is sprinkled with arsenic and melodrama by Thom Sesma (Sweeney Todd) (originally Alec Guinness in the film) who plays eight victims and the next-in-line murderer. Like Gorey Stories, one of the victims, D’Ysquith, plunges to his death, another is stung by bees and one even loses his head. Not to be out done by the men, this production uses Cindy Cheung (13 Reasons Why) as the rest of the cast.

The story starts from jail, as Monty is writing his memoir, his guide to love and murder. As he does so we are led to how he got to this place. Flashing back to the beginning, his mother who has just died. A friend of hers, Miss Shingle (Cindy Cheung) comes for tea and biscuits and reveals he is the 8th in line to become the Count of D’Ysquith. Raised in poverty due to his mother running off with a Castilian, both he and his mother were banished and disinherited. In love with the money, the hungry society ambitious temptress, Sibella Hallward (played by a vixenious Diane Phelan), Monty knows he will lose her unless he acts on his new found knowledge. To win back his love he plots to shorten the trip up the social ladder. One by one Monty’s relatives, all played by Sesma, fall to their demise, as Monty becomes torn between two lovers. Where Sibella is the manipulative vixen, Phoebe D’Ysquith (Ali Ewoldt (the first Asian Christine on Broadway in the The Phantom of the Opera)) is the virtuous girl who truly loves him.

The Director, theatre and television director Alan Muraoka, (Alan, the owner of Hooper’s Store on Sesame Street for the past 23 years), keeps this streaming version fast paced and cleverly done. Music Direction by Steven Cuevas (Broadway: Once On This Island) has this cast sounding vocally perfect. The video editing by Just Bein’ Productions (Nyseli Vega and Bianca DiSarro) is really well done as is the sound engineering by Jonathan Cuevas

Ms. Phelan gives Sibella a heart. Ali Ewoldt brings a sweetness. The two are vocally superb with acting chops that never border on trite but bring new nuances to what could have been overdone.

Karl Josef Co makes his mark as the adorable cad. His winning charismatic performance keeps the show on a steady roll.

All-Asian American production of A Gentleman’s Guide to Love and Murder streaming until Donations for StopAAPIHate.org are being accepted and tickets for the virtual show are available. Learn more at www.collaborazian.com.