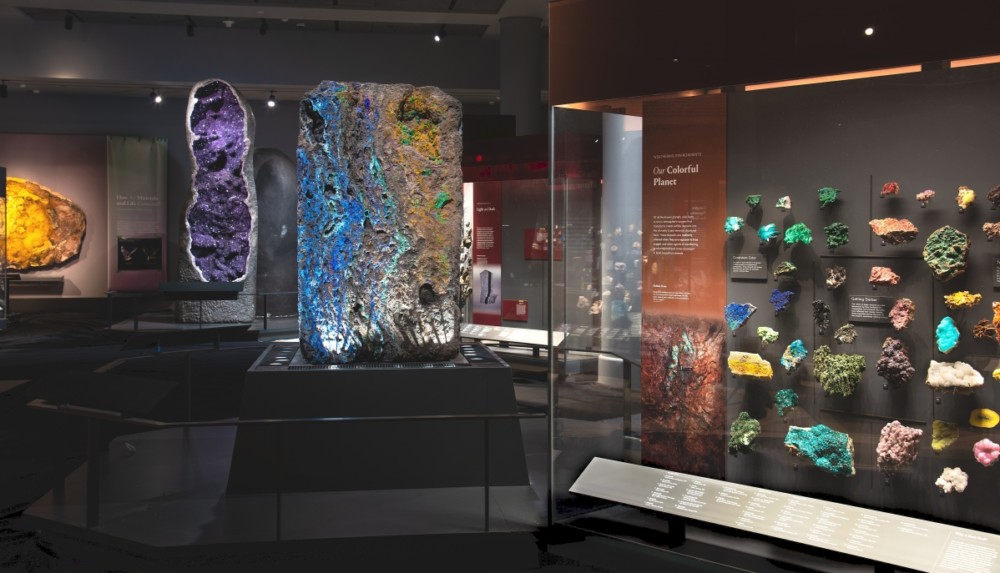 Since originally opening in 1869, the halls of gems and minerals has been a staple exhibit at the American Museum of Natural History. Newly designed by Ralph Applebaum Associates in collaboration with the AMNH’s Exhibition Department, the Mignone Halls are divided into three sections which include the Gems Hall, the Minerals Hall, and the Keith Meister Gallery. In total, they feature over 5,000 specimens from 95 countries.

Gems and minerals play crucial roles in our everyday lives. They are in our high-tech electronics, roads and buildings, even in the sunscreen we use. It is estimated that we use more than three million pounds of rocks, minerals, and metals during our lifetimes.

With over 2,500 objects, the Gems Hall showcases precious stones, carvings, and jewelry from around the world. Special items include Brazilian princess topaz and a jadeite jade incense burner fashioned during the late Qing Dynasty.

The museum’s first major mineral collection was purchased in 1874 from S.C.H. Bailey, a New York lawyer. Numbering between 5,000 to 7,000 specimens, this collection was originally displayed in the Old Arsenal Building at 64th Street and Fifth Avenue before moving to the fourth floor of the museum’s current location in 1877. Later, in 1922, the J. Pierpont Morgan Memorial Hall of Minerals and Gems opened on the same floor, primarily being used as a display and storage area.

The Morgan Memorial Hall became the site of an epic jewelry heist in October of 1964. The heist involved two young thieves who acquired 24 priceless gems including the Star of India—the world’s largest sapphire—and the DeLong Star Ruby—considered to be the world’s most perfect ruby. Though the thieves were eventually captured, only 10 of the stolen jewels have been recovered.

In 1976, the Morgan Memorial Hall moved to the museum’s first floor alongside the new Harry Frank Guggenheim Hall of Minerals. The Halls were closed in 2017 for extensive renovations, as part of the American Museum of Natural History’s 150th Anniversary Projects. Originally, the new 11,000 square foot Allison and Roberto Mignone Halls of Gems and Minerals was set to open last fall, then later in February of 2021, but were pushed back due to the COVID-19 pandemic. The halls reopened on June 12, 2021, with general admissions to the museum.

The gallery’s first exhibit will be Beautiful Creatures, which will present jewelry pieces created over the last 150 years that were inspired by animals. Curated by jewelry historian Marion Fasel, the exhibit’s pieces will be organized into categories based on animals observed in the air, water, and on land. Featured artwork will include a Cartier Paris crocodile necklace from Mexican actress María Félix’s collection, six of Suzanne Belperron’s butterfly brooches, and Joel Arthur Rosenthal’s serpent choker. The exhibit will be on display through September 19, 2021.