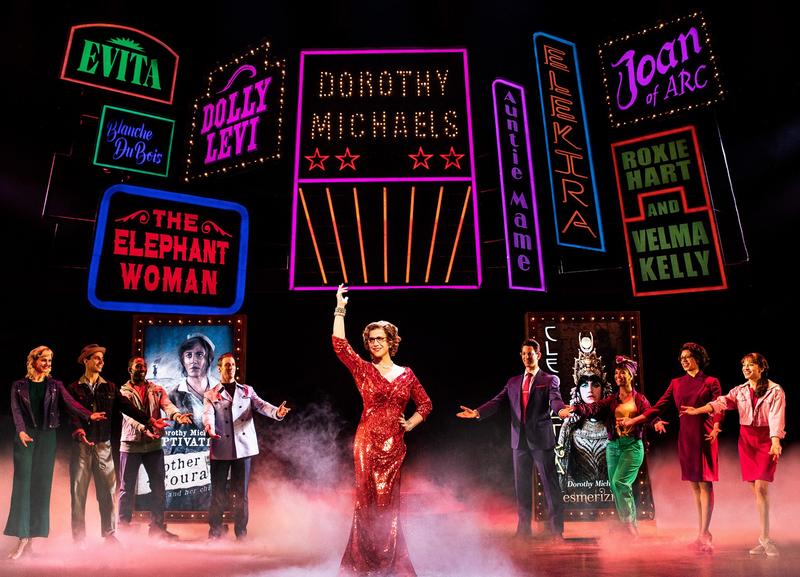 Robert Horn’s (creator of Designing Women, writer for Bette Midler, Dame Edna and more) book for Tootsie: The Musical is hysterical and one of the best books that has come to Broadway in a long time. This tuneful, lively, energetic show is great for the whole family.

Director Scott Ellis has created a joyous evening in theatre and Santino Fontana will hands down win the Tony Award and walk away with a leading man status. He will be remembered like Richard Kiley, Robert Preston and Norbert Leo Butz. His Dorothy Michaels is out-right winning, even if his Michael Dorsey is a putz.

Gone is the soap opera setting, replaced by a Broadway show that allows for dances galore and a chorus delightfully choreographed by Denis Jones.

Meet Michael Dorsey (Fontana): a struggling and obnoxious New York actor who thinks he knows everything. Now 40, he can’t get through an audition without being highly insulting. He has been fired by his agent (Michael McGrath). His roommate and BFF, Jeff (Andy Grotelueschen), is a wannabe playwright who sees Michael’s problems a mile away. His ex-girlfriend, Sandy (Sarah Stiles), still wants him though he keeps breaking her heart. While helping Sandy run lines, he decides to audition for the female role himself. Surprise, surprise, he gets the role thanks to a sympathetic producer (Julie Halston).

Michael, now named Dorothy, is in rehearsals of the musical Juliet’s Nurse. A dimwitted newcomer from a Bachelor-type reality show (John Behlmann) plays the male lead and develops a crush on Dorothy. Michael falls in love with the leading lady, Julie (Lilli Cooper). Julie no longer has a father to complicate things, and now there is a lesbian issue to deal with. Then there is the producer (Reg Rodgers) who hates Michael, who of course is directing this show.

The message of this show is woman are better at communicating and getting things done. Perfect in this climate.

Fontana steals the show. His vocals are perfection, his acting superb, and girl… can he dance. The rest of the cast is perfectly matched to Santino with their broad comedy keeping Robert Horn’s zinger script humming along. I particularly liked Behlmann’s goofy hot man persona.

Robert Horn is definitely winning the Tony Award for best book of a musical. These lines are full of one- liners, gags, and one-offs that are intelligent and downright amusing. He also manages to make this show heartfelt with something to say.

Tony-winner David Yazbek (The Band’s Visit) has created a score that is hummable. “I Won’t Let You Down”, “I’m Alive”, “What’s Gonna Happen?”, “This Thing”, and “Talk To Me Dorothy” are terrific character numbers.

Denis Jones’ choreography is splashy, silly, and an homage to choreographers we all know and love.

Bob Mackie has a run for his money with William Ivey Long’s costumes for both this show and Beetlejuice. He makes the streetwear look natural, the show costumes sublime, and the red dress glittery excellence. David Rockwell’s set design is clever.

If only the world could be seen through Dorothy’s perspective.