The Animals Come to Town With Radio City Christmas Spectacular

The Animals Come to Town With Radio City Christmas Spectacular 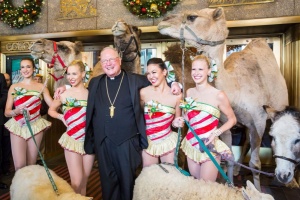 It’s official: the holiday season is finally upon us … and what better way to kick off the spectacular season than by having His Eminence bless the animals featured in the Radio City Christmas Spectacular. 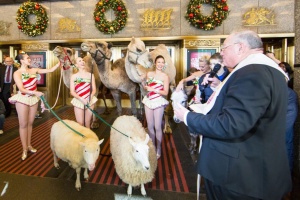 Outside Radio City Music Hall, Cardinal Timothy Dolan, the Archbishop of New York, gave his blessing to our four-legged friends who star alongside us in the “Living Nativity” number. 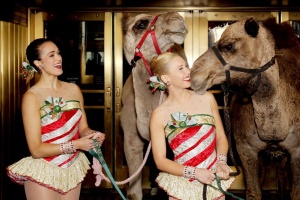 Ted the camel, who has been in the show for more than 20 years, stood quietly alongside his fellow animal friends—two other camels, two sheep and a donkey (also named Ted!)—and a few of us Rockettes as the Cardinal gave his blessing. 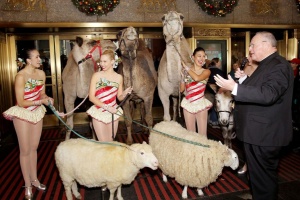 “In the Name of the Father, and of the Son and of the Holy Sprit. May the grace and peace of our Lord and Savior Jesus Christ who was born of the blessed Virgin Mary, watched over tenderly by Saint Joseph, and protected by the animals that first Christmas, be with you all. As we celebrate to prepare for the birthday of Jesus Christ at Christmas, we pause to bless these animals, who will be part of the ‘living manger’ scene, as part of the splendid tradition at Radio City Music Hall…Lord, bless all who participate in this ‘living manger’ scene.”

While the animals have been performing in the show since 1933, this is the first time they have been blessed. Cardinal Dolan felt moved by the show’s final number, saying it’s a scene that truly reminds us the message of Christmas is living and that it still goes on.

“The ‘Living Nativity’ scene is such a beautiful number that ends the Radio City Christmas Spectacular, and it really brings the joy and the warm feeling you get around the holidays to life.”