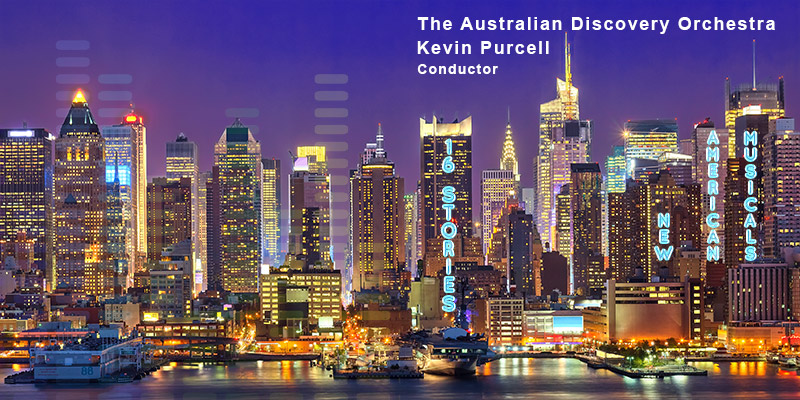 The Australian Discovery Orchestra (ADO), the world’s first solely digital streaming orchestra, is proud to announce “16 STORIES” – a worldwide online vocal competition. Renowned musical theatre creators from around the world have contributed a song from a musical they have written that has never previously been recorded for commercial release; these 16 songs will comprise an upcoming Australian Discovery Orchestra album, to be released on the Broadway Records label. This Friday, February 1st, an online global vocal competition will commence to find 16 vocalists for each song on the album – who will appear on the album as well as in the accompanying music videos. The competition will be open for submissions from midnight on February 1st until midnight on March 15th, 2019. For more information, including submission instruction, entry rules and fees, visit ADO online at https://australiandiscoveryorchestra.com/16-stories-introduction/.

ADO Conductor Kevin Purcell says, “Our greatest hope is that we will attract 16 amazing voices, whether they be seasoned professionals or completely undiscovered talent, from anywhere in the world, who will bring that indefinable quality to a song we all know when we hear it for the first time.”

The songs – and songwriters – included on “16 STORIES” are:

(1) ‘Good Enough for Me’ from Scotland, PA (based on the film by Billy Morrissette)
Music and Lyrics by Adam Gwon

(2) ‘Sixteen Bars’ from The Taxi Cabaret
Music, Lyrics and Book by Peter Mills

Peter is a recipient of the Kleban Prize, the Ebb Award, the Richard Rodgers New Horizons Award, the Cole Porter Award, and a Jonathan Larson grant. He received two Drama Desk Award nominations for The Pursuit of Persephone, and his other shows include Illyria, The Flood, Golden Boy of The Blue Ridge, and most recently, he wrote lyrics for The Honeymooners (Paper Mill Playhouse).

A collaboration between renowned jazz pianist Joe Chindamo and writer Steve Vizard, Vigil premiered at the 2017 Adelaide Cabaret festival and was nominated for 5 Green Room Awards and a 2018 Writers Guild Award for Best New Musical.

(4) ‘You Were There’ from Electric Dreams: The Musical (based on the 1984 film by Rusty Lemorande)
Music and Lyrics by Drew Lane

A producer, arranger and award-winning composer from Australia, Drew’s musicals have been performed throughout Australia, and have had seasons in the UK and USA. Highlights include presenting his musical Marking Life to Stephen Schwartz as part of Australia’s Festival of Broadway in 2010, having the first professional performance of Final Words in New Mexico in 2015, and gaining an Australia Day Award for his youth musical Somewhere To Fight For in 2012.

(5) ‘It Starts Again’ from Einstein
Music, Lyrics and Book by Jess Newman

An award-winning Australian composer, lyricist and performer, Jess was a winner of the 2017 New York City Center Encores songwriting competition, for which he performed an original song for Stephen Sondheim. Einstein had its premiere in Melbourne, Australia in 2016 and was selected byThe Age newspaper as one of the year’s theatrical highlights. A resident of NYC, he is currently completing a Masters of Musical Theatre Writing at Tisch, NYU.

Alan’s work has been performed across the US and internationally, and has also created work for television, podcasts and digital formats. Winner, 2018 Kleban Prize in Musical Theater; 2017 Webby Award; 2017 Sarah Lawrence International Audio Fiction Award. His work is published by R&H.

(7) ‘Real Adventure’ from Yo, Vikings!
Music by Sam Willmott, Lyrics and Book by Marcus Stevens

Marcus is a Richard Rodgers Award winner and a member of the BMI Workshop, ASCAP and the Dramatists Guild. Yo, Vikings! is published by Samuel French, Inc.

Andre is a proud ASCAP member and the recipient of the 2014 ASCAP Foundation Cole Porter Award, given “in recognition for his outstanding talent as a musical theatre composer and lyricist”. Stage works include The Astonishing Times of Timothy Cratchit, A Game Called Life (book by Laura Zlatos) and The Wolf (book by Joe Calarco).

(10) ‘I Didn’t Know’ from Where Were We?
Music and Lyrics by Oliver Houser

Oliver’s work has been performed at The Other Palace Theatre, The Kennedy Center, The New York Musical Festival, the New York Fringe Festival and The SoHo Playhouse. He has developed work at Goodspeed Musicals, the ASCAP and BMI Musical Theatre Workshops and the Ucross Foundation. Oliver is a 2017 Dramatists Guild Fellow and winner of the ASCAP Foundation Sammy Cahn Award for songwriting.

(11) ‘The Spark’ from The Enlightenment of Percival Von Schmootz
Music by Michael Kooman, Lyrics and Book by Christopher Dimond

Kooman and Dimond received the Fred Ebb Award, a Jonathan Larson Grant, and are the first recipients of the Mary Rodgers/Lorenz Hart Award and the Samuel French Next Step Award. Their most recent musical, Romantics Anonymous, debuted to rave reviews at Shakespeare’s Globe in 2017. They also serve as songwriters for Vampirina an animated Disney TV series, which has reached over 49 million viewers in 115 countries. Other projects include The Noteworthy Life Of Howard Barnes (Village Theater), Orphie & The Book Of Heroes (The Kennedy Center), The Enlightenment Of Percival Von Schmootz (commissioned by the Canadian Music Theatre Project),Judge Jackie Justice (Pittsburgh CLO), Dani Girl (licensed by Samuel French), Golden Gate(Williamstown Theatre Festival), and Junior Claus (licensed by Dramatic Publishing).

(12) ‘El Amor’ from The Stranger from Seville
Music by Kevin Purcell, Lyrics and Book by Victor Kazan

Kevin is a multi-award-winning international Opera and orchestra conductor, musical director for theatre and songwriter/arranger. He is the Principal Conductor of Australia’s national symphony, the Australian Discovery Orchestra (ADO). Most recently, Kevin was the initial Musical Director for the first UK/Eire national tour of Wicked. He has worked extensively over the years for the Really Useful Group and Cameron Mackintosh as musical director in London’s West End and South East Asia, most notably with the original London production of Cats.

Victor has worked in the entertainment industry for fifty years. Born in London, he carved a distinguished reputation as a writer and director in British theatre and television before taking up residence in Australia in the early 1980s. Since then, his major work has been in film and musical theatre. Among his Australian screenplays is the popular, feel-good movie ‘Dalkeith’.

(13) ‘When I Slay My Rival’ from The Rivals (Adapted from Richard Brinsley Sheridan’s The Rivals, 1775)
Music by Stephen Weiner, Lyrics and Book by Peter Kellogg

Stephen won two Richard Rodgers Awards from the American Academy of Arts and Letters, a Jonathan Larson Grant, Global Search for New Musicals Award and the ASCAP Richard Rodgers New Horizons Award for Musical Theatre. Latest works include The Rivals and The Honeymooners.He has written numerous musicals Off-Broadway, regionally and overseas. Steve is a graduate of the renowned BMI Musical Theatre Workshop and proud member of The Dramatists Guild and ASCAP.

Peter has two Tony nominations for book & lyrics to a musical of Anna Karenina (composer Dan Levine). Anna Karenina has had 3 tours in Japan. With David Friedman: Chasing Nicolette, based on Aucassin and Nicolette produced at Westport Playhouse, the Prince and Village Theatre; Stunt Girl, about Nellie Bly, New York City’s first female reporter; and Desperate Measures, a western, loosely based on Measure for Measure.

(14) ‘Somebody Else’ from Connected
Music, Lyrics and Book by Craig Christie

Craig has worked for twenty-eight years as the principal of No Mates Productions, creating original musicals in educational, community and commercial settings. Craig’s theatre works includeCrusade and Eurobeat, which won Best Musical at the Edinburgh Fringe and enjoyed an acclaimed London, West End season. His annual children’s book tours have been seen by over 2.5 million school children internationally.

(15) ‘Out On A Limb’ from Marryin’ Marian
Music by Joel Evans, Lyrics by Adryan Russ, Book by Keith Huff

Joel’s credits include more than 90 movies and 400 television episodes, including Wedding Crashers,”Friends”,”Life in Pieces,” Glenn Close’s The Wife, and the 2014 Daytime Emmy Award-winning special “The Young & the Restless – Tribute to Jeanne Cooper.”

Adryan’s off-Broadway musical Inside Out, co-written with Doug Haverty, has played across the U.S. and Europe. She has received ASCAP Awards for Popular Music, is a member of The Dramatists Guild, and serves on the Board of the Society of Composers & Lyricists.

Gregory’s award-winning song cycle The Trouble With Words debuted in 2011. In 2013, Gregory was selected to join the Johnny Mercer Songwriter’s Project, and in 2015 an evening of his work was performed at the Kennedy Center in Washington, D.C. His new musical Marilyn! (The Official Marilyn Monroe Musical) is now playing an open-ended run at Paris Casino in Las Vegas.

Launched in 2015, The Australian Discovery Orchestra, (Kevin Purcell, Conductor) provides 68 exceptional professional musicians from across the country, the opportunity to come together several times each year to perform repertoire embracing classic masterworks, the catalogue of extraordinary orchestral music rarely heard live in-concert, and, premiering new Australian music. ADO events are live as well as captured in multi-camera HD for both streaming and Pay-per-View. The orchestra is committed to seeking new ways of engaging viewers and listeners by making the music it performs a catalyst for interaction with its Internet-wide audience. Holding to the core belief that live orchestral concert music is really one of the most humanly transformative activities imaginable, the ADO strives to create unique modes of musical storytelling able to be told across multiple media channels simultaneously.

Since its founding in early 2012, Broadway Records has become one of the premiere record labels in its industry. From cast albums of major Broadway shows (i.e. Matilda) to the preservation of shorter run Broadway shows (i.e. Bonnie & Clyde), Broadway Records believes in delivering the best cast recordings to its customers. In addition to an emphasis on delivering first rate sound on their recordings, the label also believes strongly in the whole cast album experience, including packing cast album booklets with a plethora of photos from the show, lyrics and more. They also strive to innovate with the critically acclaimed “Live at 54 BELOW” series featuring top Broadway stars including Patti LuPone, Aaron Tveit, Norbert Leo Butz, Sierra Boggess, Laura Benanti and many others. They are also strong supporters of the next generation of talent, including albums from up-and-coming composers such as Drew Gasparini and Michael Mott. Broadway Records also believes in leaving the world a better place, and this has inspired the work on albums such as “From Broadway With Love: A Benefit Concert For Sandy Hook” (with 100% of our profits going to the Newtown-Sandy Hook Community Foundation), A ROCKIN’ Midsummer Night’s Dream (with 100% of our profits going to the 12.14 Foundation), “An Evening With Norbert Leo Butz” (with 100% of our profits going to the Angel Band Project) and “Shapiro Sisters: Live Out Loud – Live at 54 BELOW” (with a portion of the proceeds going to “No Bully”).