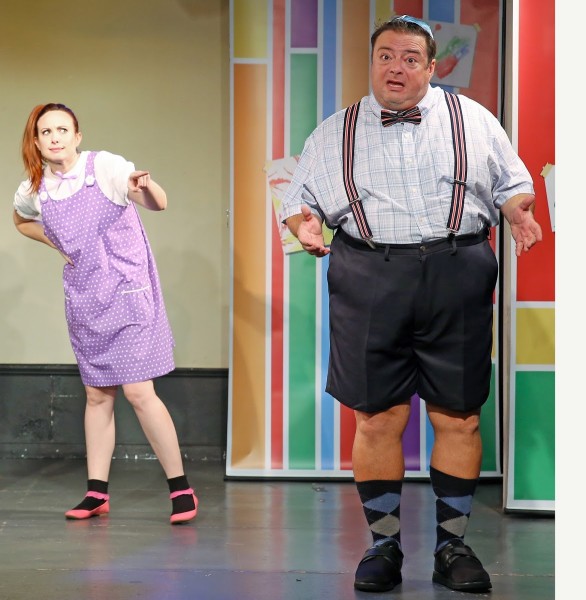 The Babies Missing some of the ABC’s

The Babies Missing some of the ABC’s 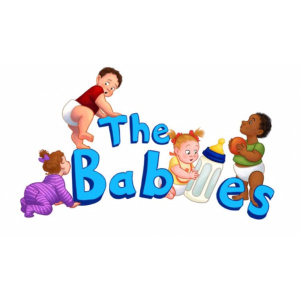 From the creator of “Gilligan’s Island” and “The Brady Bunch,” Lloyd J. Schwartz brings us The Babies, a musical short on harmonies and musical connectives. A graduate of the Berklee College of Music, Matt Dahan was both on the piano and wrote the music. On the piano, (slightly out of tune) Mr. Dahan thinks the banging is better than a subtlety to the different levels. This began with the overture. Sometimes pianissimo is so much better forte and allows a score to build. Mr Dahan’s tunes are rather nice but when sung the notes that are played clash with the singers. Also Mr. Dahan needs to study harmony because they were painful to listen to. 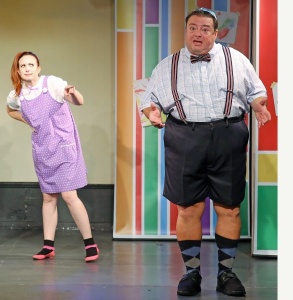 The script follows four babies in embryo as their mothers are taking Lamaze class. More like a heavenly limbo the embryos can  communicate with each other and interact. They talk about being wanted, politics and wanting to be special. The babies are all born on the same day and we follow them into the hospital nursery, Mommy and Me class and kindergarten. They learn to walk, talk, get noticed and the things babies do that we take for granted. Politically or unpolitical correct each baby is a stereotype the know-it-all  Sophie (Krista Swan) whose father leaves and she gets two mothers;  the chubby Jewish worrier Joshua (Anthony Grupposo0), who was an accident; the Army brat Desmond (David Holland), who is also African American and the unwanted, until she is adopted  Spring (Jayme Lake), the innocent of the bunch. 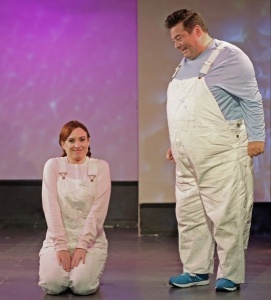 Though some of the story-lines touch on controversial subjects that if played to a elementary or Jr. High might help, the show contains a song about peeing and pooping with suggestive choreography by Gene Castle, with  profanity, sexual and adult themes. Who the audience for this show is anyone’s guess because it is definitely not for adults unless their kids or grandkids are in it.

Krista Swan sings well and has presence. Anthony Grupposo0 (also the co-lyrist) makes great baby faces, has nice comic timing and has operatic training. Jayme Lake is winsome, but not the strongest singer. David Holland is a find. With his strong pop riffing singing voice and dancing skills, “Man of the House” is clearly the best number.

The direction by Mr. Schwartz is clean. The choreography by Gene Castle well suited. The set by Josh Iacovilli clever for the space, though the lighting by Mr. Iacovilli needs some fine tuning.

Maybe if this show was cleaned up and honed and was given to actors that were between 8-16 this show would have an appeal.

We will post photo’s as soon as they are available. Krista Swan and David Holland were replacements and all the photo’s have the old cast.