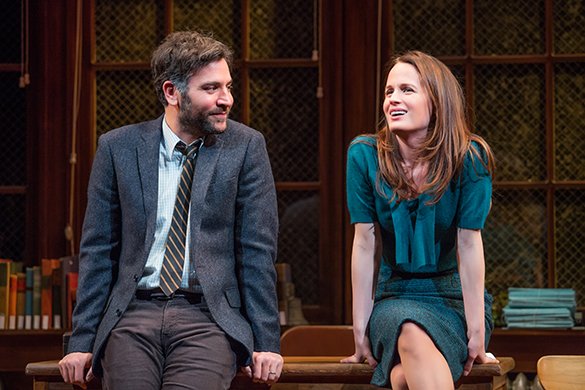 Richard Greenberg’s The Babylon Line, at Lincoln Center Theater, directed by Terry Kinney, is already at the end of the play before it even starts. Our narrator, the leading character Aaron Port (Josh Radnor), is a writer who we meet at age 86. Even though he looks the same as he did at 48, what is surprisingly is what he is reminiscing  about. We magically appear in 1967, as Aaron looks the same. I guess this is perpetual youth. We are back when he taught a adult educational writing class in Levittown, Long Island. His only credit is a story in a literary journal. His students, all opted for other classes but they were booked up, so he is saddled with three catty bored Jewish women, one semiconscious man, a disturbed teen and Joan (Elizabeth Reaser), a black sheep housewife who is on the prowl, semi crazy, talented with no limitations. 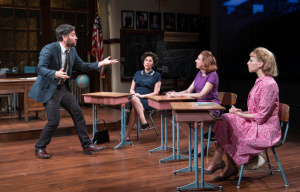 We spend the better part of two hours and twenty minuets watching the students reading, or trying to get out of reading their assignments. Act One ends when Joan reads a short story that hits to close to home for one of the matrons (a rather good Randy Graff). She is the ring leader of Julie Halston, and Maddie Corman. Kinney uses previous characters and insider jokes, but seriously who else but a critic is going to get the humor? These women are politically offensive and instead of making a comment, we are suppose to get that footnote.

Joan needs a connection and has decided Aaron is the object of her lust. She continually propositions him even though he is married. After all it is the 60’s. I don’t know any girl that would put that much effort to be cast off so often.

The last half of the play is a postscript, as we learned what happened to each characters the decades to come. The problem with this is I knew the famous women writer who he claims this is based on and Mary McCarthy was nothing like this Joan.

The fabulous Frank Wood and Michael Oberholtzer looks hot but is given nothing to do.

By the end of the play it felt like we had just sat for over two hours in Mr. Greenberg’s therapy session where even he couldn’t figure it out.