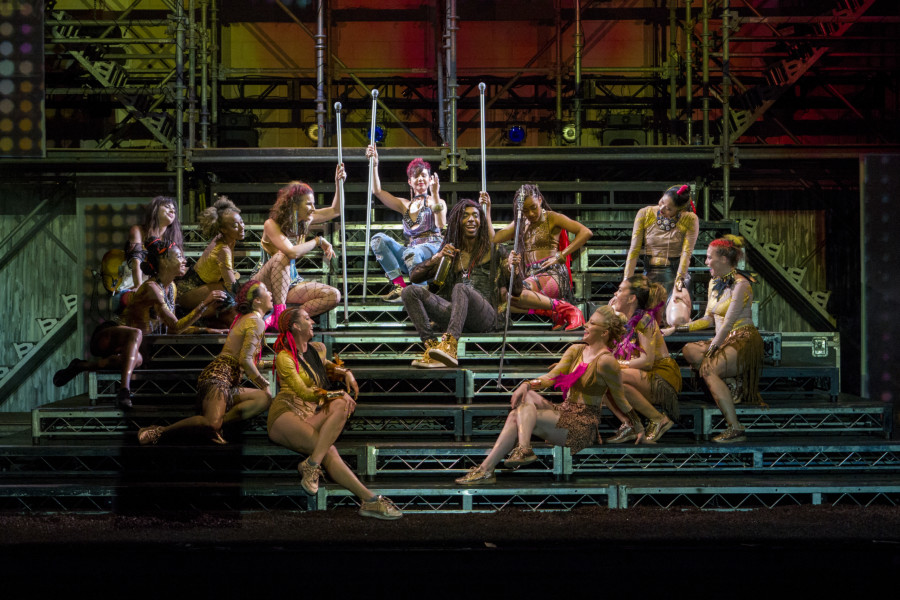 The Bacchae: Fierce and Uncompromising, Nothing to Condemn

The Bacchae: Fierce and Uncompromising, Nothing to Condemn

The Classical Theatre of Harlem presents Bryan Doerries’ new version of The Bacchae by Eurpides in Marcus Garvey Park. Doerries’ adaptation brings the tragic story of Dionysus and Thebes straight into the heart of Harlem; and it highlights the current social and political climate in smaller ways – the obsession with celebrities and social media – and in larger ways – the constant struggle between chaos and order, believers and non-believers, the old and the young, wisdom and foolishness, violence and compassion. Under the direction of Carl Cofield, the cast and theatrical elements come together to create a fierce production that knows exactly what it’s about.

The performance begins with Dionysus (Jason C. Brown) disguised as a mortal, Preacher D. Depicted as an androgynous rock star, Dionysus tells the chorus that he has come to his birthplace of Thebes to establish himself as a god worthy of worship. The challenge he faces is that the house of Cadmus (of which he is part) denies his divinity. While The Bacchettes, a chorus of fangirls/backup singers for Dionysus, sing his praises in Thebes, Dionysus drives several women to the mountain where they become Maenads. The old king Cadmus (Charles Bernard Murray) and the famous seer Tiresias (Brian D. Coats) decide they will worship Dionysus, but King Pentheus (RJ Foster) denounces their wisdom as foolishness. He orders that Preacher D be arrested. When Preacher D is brought to Pentheus, he tries to convince him that he should worship Dionysus. After speeches and divine displays of power, Dionysus persuades Pentheus to go up the mountain where he meets a tragic end.

Jason C. Brown and RJ Foster are a force to behold on stage as individuals, and as scene partners they are what makes this production a power house. Charles Bernard Murray and Brian D. Coats are also well paired as the older and wiser characters. While there isn’t a single actor here who isn’t worth their salt, Andrea Patterson shines brightest in her short time on stage as Aguae, mother and murderer of Pentheus. Her crazed speech is delivered with fire and the physical movement she uses in Aguae’s discovery is real and heartbreaking.

Tiffany Rea-Fisher’s choreography feels ethereal, sexual and sharp all at the same time. The dance ensemble, made up of members of the Elisa Monte Dance Company, is omnipresent. The chorus and ensemble sing Frederick Kennedy’s compositions beautifully, most notably Gabrielle Djenne, who also creates a journey that is intriguing and contrary to the rest of her cohorts. Musician Alicyn Yaffee, as part of the chorus, drives the musical language of the piece, setting the mood from moment to moment.

Lex Liang’s colorful costume design creates a punk rock tribe of Bacchettes, while also calling to the Greek roots of the play with several toga like pieces for the more conservative characters. The industrial scenic design by Christopher and Justin Swader evokes the setup of a rock concert with dynamic lights (Alan C. Edwards) and provocative projections (Katherine Freer), yet it feels empty without humans. It makes its own statement in the play.

There is absolutely nothing to criticize about this incredible, thought provoking version of The Bacchae by Bryan Doerries. The stunning spectacle is married to the vengeance, chaos and fear of the story and leaves the audience to contemplate who is right and who is wrong.