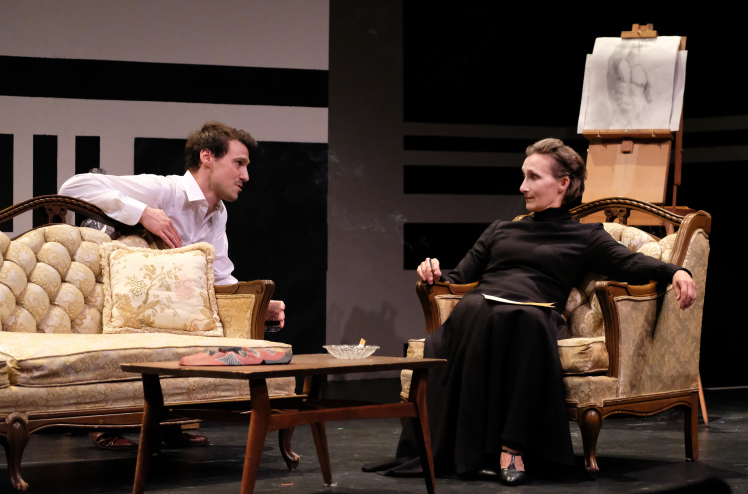 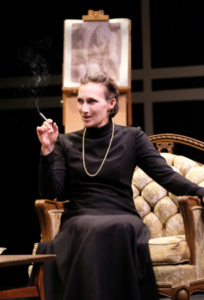 “If you want to be an artist you must blast open the world you know. And step into something greater. Then you will be given access to divine insight.” This is a profound quote by the brilliant writer, Isak Dinesen, also known as Karen Blixen and seems to be the stone that this play is chiseled from. The Baroness – Isak Dinesen’s Final Affair by acclaimed Danish Playwright Thor Bjørn Krebs and presented by the Scandinavian American Theater Company (SATC) attempts to elevate this interesting story to the artistic heights that quote aspires to. As directed by Norwegian director and SATC Co-founder Henning Hegland, the poetry and the artistic ideas are there floating in the moonlight of the grand ideal, but much is lost in this overly long play, trapped in a whirlwind of repetitive dramatics and themes, and weighed down by a bland portrayal of a handsome poet. 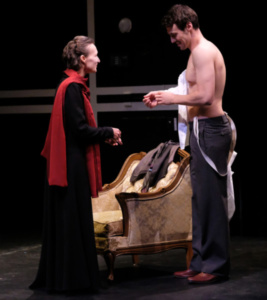 The Baroness attempts to explore the fascinating mentor/mentee relationship that is formed between the 62 year-old Blixen, best know for such epic stories such as ‘Out of Africa‘ and ‘Babette’s Feast‘ under the pen name of Isak Dinesen, and a newly celebrated 29 year-old Danish poet Thorkild Bjørnvig struggling to begin work on his second book. The characters are real (even if they don’t feel authentic in this telling) and their relationship is wrought with possibilities for fireworks and great art. Their pairing is well documented and it is no surprise playwright, Krebs was inspired to write this drama based on the numerous letters and books by and about both Blixen, played with majestic and magnetic charm by Dee Pelletier (Broadway’s August: Osage County) and Bjørnvig, played by the athletically handsome Conrad Ardelius (One Sky Performance Space’s Angels in America). It’s a powerfully dangerous and intimate friendship that is said to have been developed between the two, and from the moment Bjørnvig is ushered into Blixon’s home by his publisher’s wife, Benedicte, played flirtatiously by Vanessa Johansson (SATC’s Bastards of Strindberg) in the first few moments of this overly long play, the erotic and sensual engagement of these woman towards Bjørnvig is apparent, understandable, and surprisingly electric. 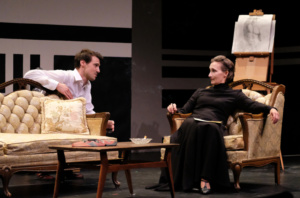 Their relationship is seeped in sensuality, poetry, and music but one has to wonder if the translation by Kim Dambæk lost some of the dynamic flow in the dialogue. At times, the interactions are beautifully lyrical while other moments, they ring false and overly dramatic, especially those that have a sexual edge that teeters on the crass. It’s striking and unnerving as we swirl in and out of this pair as they dance a strange dance together, with no clear idea of the motivation behind it all. Is it entirely a desire to elevate the blocked young writer’s passion and in turn, inflame his art and poetry, or is there something else entwined in her fascination and devotion? The answer eludes us, right up to the end, as the words are never spoken with sincerity or clarity. 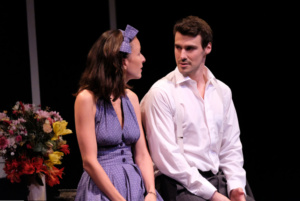 The real magic of this piece lies with Pelletier’s dramatic dance as the world renown writer, Blixon. The stage is only alive and vibrating when Pelletier is on. Her ability to intoxicate is undeniable even as she spirals and rants excessively over and around the same too-often repeated complexities. Many will immediately know the name of Karen Blixon from Meryl Streep and Robert Redford’s star turn in Sydney Pollack’s film, ‘Out of Africa‘. This 1985 movie chronicles the fascinating and true love story between the married Blixon and the mysterious white hunter, Denys. It’s a dramatic core that is often discussed center stage as one of the most compelling and crucial moments in the sensual life of Blixon. Having a knowledge and understanding of that tale, and the true story of this adventurous woman, is not required reading or viewing, but it does make it resonate on a deeper and more authentic platform. 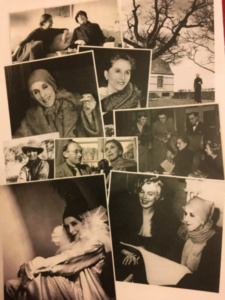 Pelletier brings an older version of Blixon to dramatic life, swooping around in long gowns fiercely defending artistry and passion over the common moralities of the time. Intense passion mixed with dismissal and cruelty flow in waves that get grander and more dramatic as the play spins forward, sometimes with a repetitive nature that starts to become frustrating. The back and forth in regards to their pact plays out endlessly and far too often that one wonders why Bjørnvig tolerates the lunacy for the many years that he did.

But it is hard to look away from the compelling portrayal of Blixon by Pelletier, even as the tale spins closer and closer to a literary Danish version of the melodramatic film, ‘Sunset Boulevard‘. One of the main problems with this production lies squarely on the strong broad shoulders of its leading man. Ardelius’s Bjørnvig, although physically as handsome as described by the others, fails to ever really register as an intellectually captivating writer of poetry. He seems a capable actor, but when dueling and engaging with Pelletier’s Blixon, he pales in comparison, and one is left wondering what she sees in him, other than a great physical beauty.

Muddling the water even more so is the strange abstract and distracting set design by Akiko Nishijima Rotch. The actors, with great fanfare remove sheets from furniture and later, rectangles off the wall. None of which makes much sense in the long run. They peel away sporadically squares in the Mondrian inspired background to reveal three separate blocks of strong colors that later, near the end of the play reflect in the fine costumes by Stine Martinsen. It seems the design team is trying to signal a particular person’s story is taking presidence. Yellow for Bjørnvig’s moment and his cardigan. Red for Benedicte’s time in the spotlight and the hot red dress she dons in Act 2, and lastly, blue, the color of Blixon’s sweater and also for her return to center stage. I’m not sure what the connection to the art of Mondrian symbolizes but ultimately the design, with lighting by Miriam Nilofa Crowe does little to draw us into the intimacy of this love triangle. It actually keeps us at arms length. The designs that works are the sound design by Amy Altadonna and more importantly, the original music by Aleksi Ranta. Combined with the wondrous Chopan, the music engages and invites us to dance along with these characters, even as it gets more and more difficult to relate.

It’s completely understandable that the playwright, Krebs and the director, Hegland would be enthralled in the story of this complex and dramatic relationship. It’s a compelling drama about one of history’s most interesting female writers. They attempt to carve out the divine in their engagement, and at moments one feels the poetry even when overdone and unrealistic. Some more carving and sculpturing might be required to create a truly mesmerizing and emotionally powerful portrait of this captivating woman and the man who she tries to cajole and blast open his passion in order to heighten his artistry into something great. As with Blixon’s,and this production’s attempt, neither have quite achieved divine insight with their pet project.