The Barrow Group Reaches a Wide Audience With Expecting Isabel

The Barrow Group Reaches a Wide Audience With Expecting Isabel 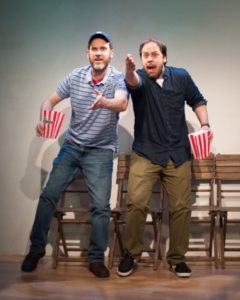 The Barrow Group’s production of Lisa Loomer’s Expecting Isabel connects with it’s audience, especially the male sector. This comedic take on Miranda (Myra Thibault) and Nick’s (Alex Correia) journey to have a baby is fresh. We follow this young couple’s desperate efforts to become pregnant, then to adopt. It is insightful, hilarious as they dialogue ensues. Miranda, tells the audience immediately “I am not a ‘happy’ woman.” All of her life she has been a loner, until she met her complete opposite, her happy go lucky Italian happy husband Nick. It is Nick who decides it’s time to have a baby. Miranda at first is reluctant, but becomes obsessed. The couple tries every approach under the sun, including a fertility doctor (Myles O’Connor) to no success. The task is starting to take a toll on the marriage. 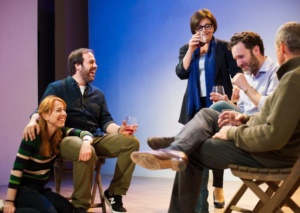 The second act, tortuously leads us through the adoption process.

There are some pitfalls here. Nick is approaching 40 and wants to replicate his big Italian family, but he is a broke struggling artist, so I was never sure how they got the cash for such an expensive adventure. As I watched this all I could think was this would make a great sitcom.

The cast makes this piece watchable and relatable especially Priscilla Shanks as Miranda’s alcoholic mother. Myra Thibault as Miranda, makes us care for her and she is believable. Correia ‘s Nick is endearingly macho without becoming a caricature. He allows us to see the male point of view. Kathryn Kates plays Nick’s Italian “Mama Mia” mother Yolanda. Daphna Thier rounds out the female cast in a variety of parts. As the best male friend Michael Cuomo is hilarious

Director Seth Barrish keeps this journey on the move and it is an insightful one.

Lisa Loomer is a talented writer and I look forward to seeing her next work.

Trying to conceive and if that fails to adopt is a topic many can relate to and Expecting Isabel lightens that long and odorous road.