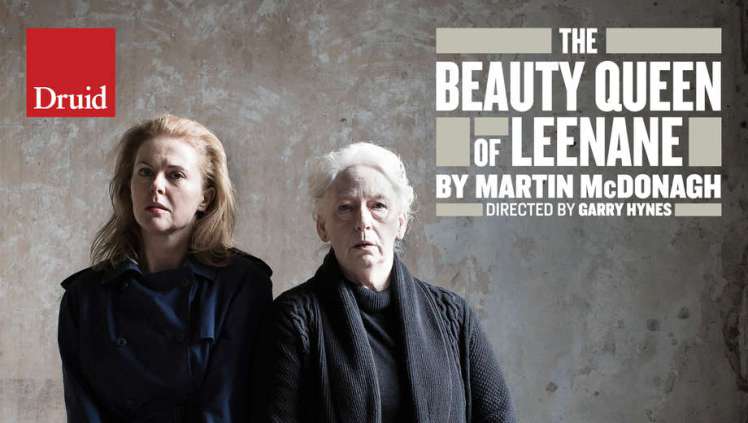 The Beauty Queen of Leenane: The Poor Dark Irish Cousin to Chekhov

The Beauty Queen of Leenane: The Poor Dark Irish Cousin to Chekhov 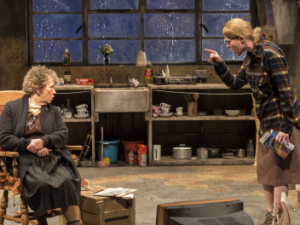 After spending time with that bored lot over in the Chekhov world that is The Present, I found myself with another bored and frustrated lot in BAM’s Harvey Theatre. The rural Irish folk of Martin McDonagh’s The Beauty Queen of Leenane are as trapped in their reality as any Chekhovian character. The only difference lies in their wealth and the circumstances. There is a stronger stench of anger and cruelty that hangs over this Irish mother and daughter. One that is just itching to explode. But the explosion that happens here in this farmhouse outside of Leenane is violently personal and aggressive, in ways those Russian rich folk could never be. 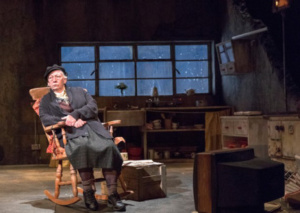 I remember seeing this show off-Broadway in 1998, and not surprisingly, this revival, once again directed by the Tony winning Garry Hynes (first female to ever win Best Directing Tony Award), is as riveting as ever. Maybe, this time around it’s even funnier than what I remember but without losing one shade of darkness. Mary Mullen has returned after winning a Tony award for playing the beaten down daughter, Maureen, but this time she’s taken on the role of the devious mother, Mag Folan, a selfish and petulant destroyer of her unmarried daughter’s happiness. It’s quite the concept that abstractly exists here; that daughters turn into their mother. And here we have the former 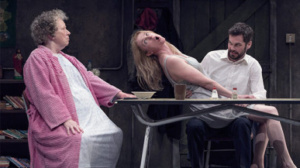 Maureen, who was so unhinged in 1998 resurrected in a way as the cruelest of mothers, gleefully and almost childlike in her attempts to thwart any option that would give Maureen an escape from her unhappiness. It’s a stellar performance full of manipulation, sullenness, passive aggressiveness, and trembling fear of what she might have unleashed. It’s done with such slyness and sprightliness that her actions caused some members of the audience to gasp out loud, and call her names just under their breath (the ‘B’ word was heard here and there). 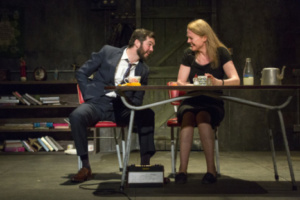 With this Maureen, played beautifully by Aisling O’Sullivan, you get a glimpse of both the unhappy 40 year-old virgin who’s trapped at home caring for her beast of a mother, and also the vibrant woman lurking just under the surface, waiting for an opportunity to come out. She really is, at moments, The Beauty Queen of Leenane, and it’s no stretch of the imagination when London-living Pato Dooley (the handsome and gentle Marty Rea) returns home for a farewell family gathering, that he would have been harboring an attraction for years, and finally has the nerve to act on it. It’s one of the sweetest moments seeing Maureen truly embrace herself as a desired woman, and to see and feel it being reciprocated made us all glow with her. Especially in the gloomy home of these two trapped beasts (set and costume design: Francis O’Connor; light design: James F. Ingalls; sound design: Greg Clarke), one can’t help but join with Maureen in her wish for brighter skies and warmer pastures. So much so, that her heartbreaking story about her one moment of escape, only adds to the weight she must be carrying stuck in that house with her mother. 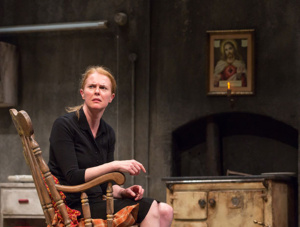 The other bright patch for us is the inclusion of Pato’s hilarious brother, Ray Dooley, played with devilish charm by Aaron Monaghan. With the perfect blend of a young man’s restlessness, boredom, frustration, and Irish wit, he steals the focus with every incredulous line and swearing retort. His goofy presence is matched perfectly with Mag’s put-on grandmotherly neediness and manipulation, and then later with the deadpanned diminished Maureen falling down the rabbit hole in the last devastating scene. The brilliance of McDonagh’s writing is that it has the perfect balance of humor and darkness, rolled up and seconds apart. I had forgotten how this play wraps up in the end and found myself as shocked as everyone else. The Beauty Queen of Leenane packs a powerful punch in the end, even after all the laughs. The premise is as sad as those bored Russians, but at least Maureen finds her escape from Leenane. In her own disturbing way.