Mayim talks about raising boys in her new book Boying Up: How to be Bold, Brave and Brilliant, Bialik wittily and candidly shared tips on raising boys. 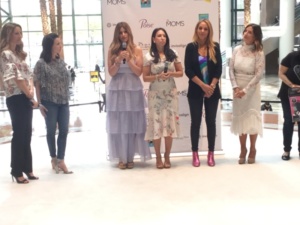 Denise Albert and Melissa Musen Gerstein and the entrepreneurial moms,

The MOMS debut a Marketplace for the public featuring new brands launched by entrepreneurial moms, as well as Brookfield Place shops Babesta and Sundays Nail Studio.  The event was sponsored by Brookfield Place , Invisalign Brand and Poise.

Mayim Bialik started her career as a child actress in the late 1980s. Her early roles included the horror film Pumpkinhead (1988), her first acting job, and guest appearances on The Facts of Life and Beauty and the Beast. In 1988-1989, she had a recurring role on the TV comedy Webster playing Frieda, Webster’s classmate, in 8 episodes. She appeared in three episodes of MacGyver as Lisa Woodman. She appeared in Beaches (1988), playing Bette Midler’s character as a young girl. She also appeared in the video for the song “Liberian Girl” by Michael Jackson. In 1990, Bialik was the lead character in NBC’s Blossom. She joined the cast of The Big Bang Theory as Dr. Amy Farrah Fowler. Bialik’s performance in The Big Bang Theory earned her Emmy Award nominations in 2012, 2013, 2014 and 2015 for Outstanding Supporting Actress in a Comedy Series. She got a Ph.D. in neuroscience in the in-between time.

Bialik founded Grok Nation in August 2015 for people of different ages and backgrounds to have conversations on contemporary issues. Bialik has written two books with pediatrician Jay Gordon and two by herself. Beyond the Sling is about attachment parenting, while Mayim’s Vegan Table contains over one hundred vegan recipes written by Bialik. Her third book, called Girling Up, is about the struggles and ways in which girls grow up while showing the scientific ways in which their bodies change. Now she has Boying Up: How to be Bold, Brave and Brilliant.

The MOMS is a multi-platform lifestyle brand that celebrates—and puts a spotlight on—modern motherhood. Through their numerous broadcast appearances, The MOMS Podcast and blogs and social media, Denise Albert and Melissa Musen Gerstein tackle topics both big and small that resonate with moms today. Their brutally honest–and sometimes conflicting–opinions are not only entertaining, but take the parenting conversation to a whole new level. Through their experiential events, everyday moms become celebrities, and celebrities reveal their lives as an everyday mom (or dad!). The ever-popular Mamarazzi events provide influential moms and media with access to celebrity parents in a town-hall discussion. Mamarazzi guests have included Sarah Jessica Parker, Will Smith, Jada Pinkett Smith, Jennifer Garner, Kevin James, Elizabeth Banks, Tina Fey, Hugh Jackman and Pitbull and The MOMS recently hosted a 6 part Mamarazzi series on People.com with Halle Berry, Alicia Silverstone and others. Whether they’re online, on TV, radio, or face to face, The Moms engage their audience with straight talk, a sense of humor and a healthy dose of fun—kind of like parenting itself.