The Bigot is Not So Much A dark Comedy But Heartfelt 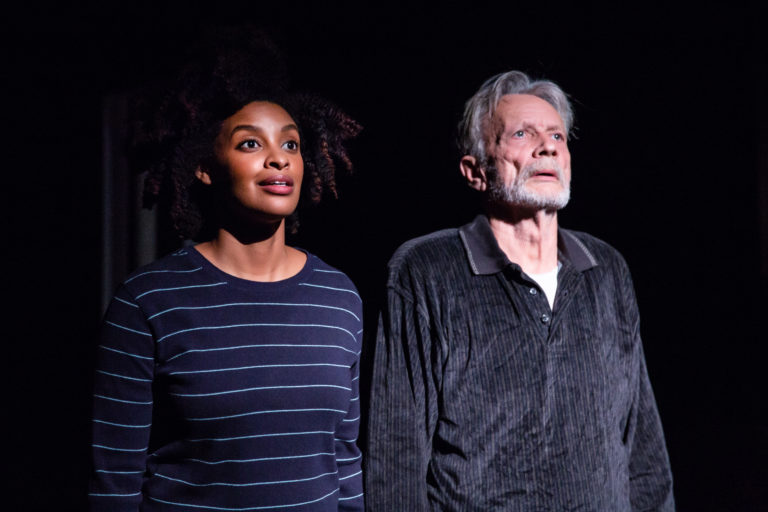 The Bigot is Not So Much A dark Comedy But Heartfelt

Gabi and Eva Mor play The Bigot, tackles hate, compassion, acceptance, wanting to repair the past, unconditional love and does them well. Though this show begins with a slow start, this play weaves its plot line into your heart.

Everybody has a reason for why they feel the way they do and for doing the things they do. We first meet Jim (Stephen Payne) as his son Seth (Dana Watkins), who is trying to take care of him. Jim is an equal opportunity bigot, intolerant of religions, politics, sexual orientation, gender and ethnicity – he hates them all and is happy to let them know it. He also needs a kidney. To Seth, Jim is a never-ending frustration, so much so that he calls him by his own name, not dad. He is annoyed and embarrassed at the things that come out of his father’s mouth. On a mission to enlighten him Jim is teaching him intolerance lessons and has given him a laptop. The deal is Jim has to take the course to see if he is a perfect match as a kidney donor.

Because Jim has alienated everyone around him and Seth is his only helper, he tries to enlist the help of his next door lesbian lovers Paula (Jaimi Paige) and Aysha (Faiven Feshazion) who have just moved in. Their romantic relationship is driving Jim up a wall, but overwhelmed Seth asks Paula to look in on Jim and she accepts. Though Aysha is not thrilled, the optimistic Paula decides she is going to win Jim over.

This play works mainly because of its cast. Stephen Payne makes you understand his reasons and his performance is layered and full of depth. He is like many people I know who refuse to budge, because they have been hurt and victimized. Now stuck, they can not see out of their set belief system. The good looking Watkins shows us the frustration of anyone taking care of a patient. Ironically Alzheimer and Dementia patients also head into this dark place. Faiven Feshazion also gives layers as she tells how  racial slurs have affected her entire life. But it is the Jaimi Paige who gives the ultimate hopeful optimist approach that makes us see hope in humanity.

Michael Susko’s direction is a little heavy handed and makes the play seem longer than it is. Designer Adam Crinson set feels low budget, as does the costumes by Barbara Erin Delo. Daniel L. Taylor lighting however is well done.

The Bigot was originally produced in 2017 by Manhattan Repertory Theatre and then toured the country in 2018. The show also has had successful runs in Colorado Springs, Orlando and Sanford Florida.

The Bigot at times is cringe-worthy and sappy. Gabi and Eva Mor, who according to the playbill both experienced discrimination and anti-Semitic slurs growing up, “never lost hope.” Which is why they wrote a play about hope. It is obvious they self produced this show and at times the show works, though most of it seems contrived.

The ending however is The Bigots salvation. Though the end is tied up neatly in a bow, I would like to think people can change and transform due to the goodness of others. Billed as a dark comedy, The Bigot is not, but it is emotional and tugs at your heart strings. You find yourself walking out of the theatre just a little bit uplifted.