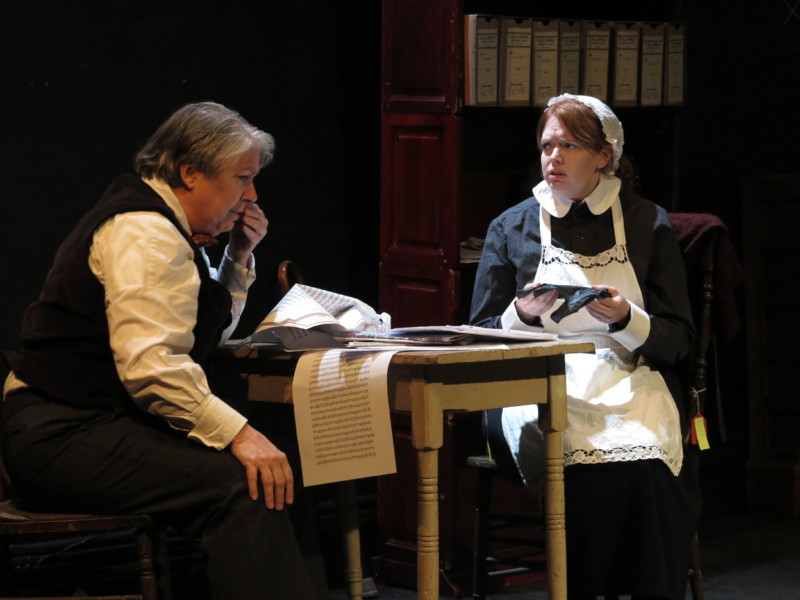 The Black Glove: Not a Children’s Show

The Black Glove: Not a Children’s Show

The Strindberg Rep’s production of The Black Glove is a show intended for children audiences, yet it isn’t written or presented with the heart and gusto that one might expect of a play for children. I am an adult with a managable attention span, and I was falling asleep.

Strindberg’s story tells of a young wife and mother who is very wealthy and very unkind. The play opens with The Professor (Jo Vetter) talking to two maid servants, Ellen (Crystal Edn) and Kristin (Amy Fulgham). They discuss the cruelties of The Wife (Amber Crawford), who is presently in a fit because she has lost her black glove and a precious ring. Naturally she is blaming the maid servants. The Professor happens on the glove and gives it to The Caretaker (Diane Perell), a very apathetic character. The Caretaker misplaces the glove – or so he thinks. We learn quickly that it has been taken by Tomte the Elf (Pilar Garcia). Tomte and the Christmas Angel (Mary Tierney) discuss punishment for The Wife’s wicked ways, and they decide that they shall kidnap her child, and then restore the child on Christmas Day. Of course, between a missing child and a missing glove, The Wife learns her lesson. 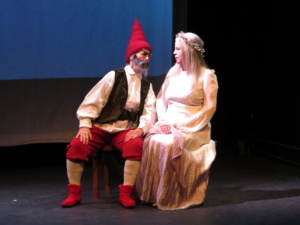 This production is a verse translation by Anne-Charlotte Hanes Harvey, and while the work is lyrical and poetic, the flaw of the play is in its construction. There are a several poetic monologues that do not make sense in the context of the story, and some events do not follow each other in a sensible way. The existence of the scene between Tomte and The Professor hinges on an end-of-play revelation that has nothing to do with the rest of the events in the play. It is not a wonder to me that The Black Glove is the least known of Strindberg’s chamber plays.

The Strindberg Rep claims The Black Glove is a “children’s play for Christmas,” and while the story is akin to a darker set of fairytales (such as Rumpelstiltskin), the spectacle and energy of the performance is lacking. Robert Greer’s direction is natural but incredibly stiff. Jo Vetter  and Pilar Garcia are the most engaging performers in the cast. Occasionally the actors were not loud enough, though they deliver the verse well. 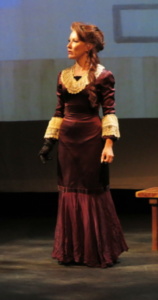 Amber Jean Crawford as The Wife. Photo by Jonathan Slaff.

The production also claims to have a minimalistic set design, which is perhaps why they do not credit a scenic designer. There are too many objects and furniture pieces to call the design minimalistic – so much so that the scene transitions are too long. The set pieces and props were very specific and were very much in the time period of the play as well as the lovely projection design, by Donna Miskend. The sound design as it exists is lovely, however I feel sound designer Giovanni Villari missed a lot of opportunities to color the poetry of Tomte’s verse during those long monologues. Janet Mervin’s period costume design captured the sobriety of the play while also being colorful and elegant.

While the production elements were nice and the acting decent, The Black Glove is not a children’s production by any means.

Suzanna BowlingJuly 28, 2022
Read More
Scroll for more
Tap
Let’s Talk Frozen and the Holidays with Robert Creighton
He Says: Descriptions are Lies, But Describe the Night is Truly Poetic