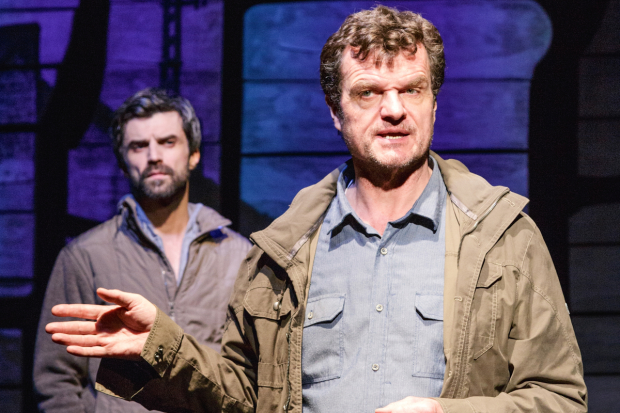 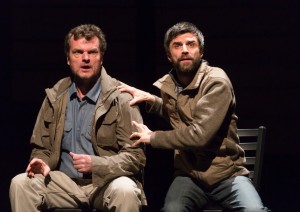 Dan O’Brien’s new play, The Body of an American tries to let us into the mindset of Canadian photojournalist Paul Watson. That name may not mean much to most people, but his Pulitzer Prize-winning photographs in 1993, while covering the civil war in Somalia depicted Staff Sgt. William Cleveland’s body being dragged through the streets of Mogadishu. It was seen all over the world and it has haunted Mr. Watson ever since he contemplated taking it. 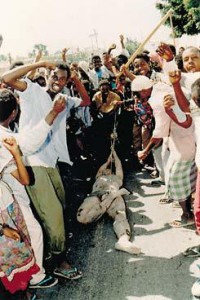 Body of an American, is making its New York debut with Primary Stages at the Cherry Lane Theatre, having won the 2013 PEN Center Award for Drama in London. I do not think this two-person play will have the same impact here. 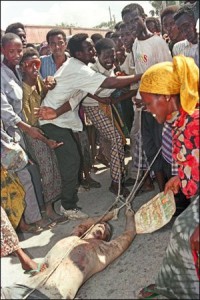 The premise is this photograph allowed for a public outcry that led the Clinton administration to pull out of Somalia, but it also left the words “If you do this, I will own you forever” engraved in Mr. Watson’s head. This is what he heard from the dead man as he was about to let the camera flash. What would have made these words so chilling, is if this was the first time Mr. Watson witnessed death, but he not only covered Somalia, Afghanistan and Rwanda but every place there was war, death and destruction. 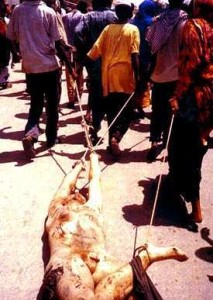 This play should have been interesting… it was not. First there are only two actors Michael Cumpsty who mostly plays Paul and Michael Crain who also plays Paul, as well as the writer Dan. The two also take on other characters, with Crane taking on the bulk of the gymnastics. Both actors are likeable, thoroughly talented and are so much better than this talkie, confusing, monotonous play.

The writer has made Watson soulless with his tracking down death and thrilling at the misery of others especially in Rwandan. Though in reading up about this man that may be true, as an audience we do not buy into this especially since this is a man who lost his hand in birth. We never care for Watson even in the moment Paul calls Cleveland’s family looking for closure. The family of course wants nothing to do with him, despite he pleads for forgiveness. The audience becomes like that family, closed to this man.

Jo Bonney’s minimalist direction does not help. Even the set by Richard Hoover with Alex Basco Koch’s projections, become uninviting.

Mr. O’Brien’s words are poetic with out meaning. His characters confusing as they switch back and forth and he has taken a subject and distanced his audience from it instead of drawing us close.

The Body of an American: Primary Stages at the Cherry Lane Theater, 38 Commerce St. through March 20th.