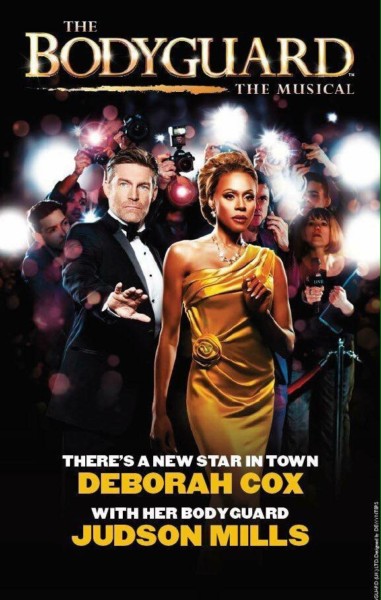 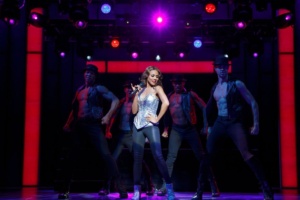 I remember the weekend when Whitney Houston passed away.  It was the night before the Grammy Awards, and I, like the rest of her legion of fans was just stunned by the loss. I reflected back on her catalog of hits that were the soundtrack to almost every high school relationship or breakup I could recall.  Often referred to as “The Voice” by industry insiders, Houston was a one of a kind talent who left an indelible mark on popular music and pop culture throughout the 1980’s. Beginning as a model and quickly morphing into a Grammy Award-winning titan of entertainment, her evolution into film was inevitable. The camera adored her. So did November 1992 audiences, to the tune of over $400 million box office dollars. The Bodyguard was an impressive debut. Then there was the original soundtrack, which to date is the best-selling soundtrack of all time. Global sales are in excess of 45 million copies.  Fast forward 25 years and The Bodyguard is back, reimagined as a live, staged musical, now playing at the Oriental Theatre. 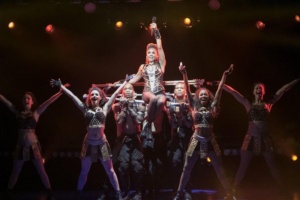 Stepping in to fill the designer boots of Whitney Houston’s character, international superstar Rachel Marron, R&B diva Deborah Cox and filling Kevin Costner’s gun holster, Judson Mills. For those unfamiliar with Cox’s work, this Grammy nominee and A Lady of Soul Award winner has played the leads in Elton John and Tim Rice’s musical Aida, fronted the tour of Jekyll & Hyde and was featured as Josephine Baker in Josephine, before embarking on this role. A friend and ally of the LGBTQ community, Cox has headlined both Pride and Halstead Market Days concert events right here in Chicago over the last few years. In a serendipitous twist, Cox was also brought in to re-record many of Houston’s biggest hits for the 2015 Angela Bassett directed Lifetime Television movie, I Will Always Love You: The Whitney Houston Story, when securing the rights to Houston’s original recordings was not possible.  When it comes to the pipes required to belt Houston’s impressive song list, Cox proved herself more than up to the challenge. With her Impossibly long legs and robust vocal prowess, Cox has the aesthetic and talent to knock this part out of the ballpark. When she sang, she certainly did. It is just the script here that needs finessing. 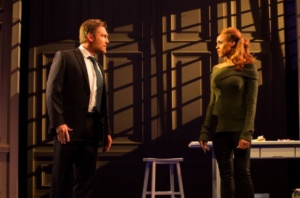 Director Thea Sharrock has assembled a troupe of talented and vibrant dancers to bring Houston’s work to life.  Modifying “How Will I Know” into a charming duet between mother and son, Fletcher (Douglas Baldeo and Kevelin B. Jones III alternate the role) will leave a smile on any audience member’s face. Karen Bruce’s choreography also delighted. The problem on hand, the book by Alexander Dinelaris, is painted with alarmingly broad strokes. Former Secret Service agent turned personal protector, Frank Farmer (Judson Mills) is such a serious character, he never smiles until the overtly festive curtain call.  He has far more chemistry on stage with the remarkable Jasmin Richardson who played Nicki Marron, Rachel Marron’s sister.  Jasmin may not get the guy or the glory, but she certainly won over the audience the night I attended.  Her rendition of “All At Once” proved mesmerizing, if not slightly rushed by a set continually moving around her.  This one note script does craft some solid moments of tension and suspense built around the Stalker, Jorge Paniagua, a more than menacing villain. However no one is going to see The Bodyguard for the Villain.  They want romance and titillation, but sadly the sparks between Cox and Mills never truly ignited until she began to sing. All the emotion, passion, and character cadence occurred during Houston’s globally recognizable songbook. No where else. 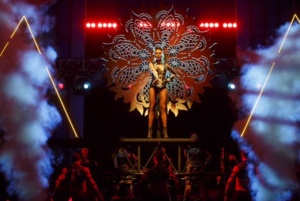 Speaking of songbook, the smartest move on the part of the producers involved were to secure the rights to not only the Houston hits from the Bodyguard movie’s soundtrack, but also an additional half dozen hits from her career catalog.  Ranging from the passionate ballads including “ All The Man That I Need”, “I Have Nothing” and “Run To You” to the up-tempo “So Emotional” and a Latin flavored “I’m Every Woman” the audience will discover the “Greatest Love of All” here is the music. The story followed the film’s theme of superstar being stalked at the height of award season, when Rachel has been nominated for an Oscar. Here, adorned in a golden gown, Cox belts out a moving “One Moment in Time” although the climax of the song interrupted by a showdown between Bodyguard and Pursuer.  Let’s face it, more than half the audience was there to hear the Dolly Parton scribed love ballad “I Will Always Love You” and that moment, adorned in a dark beaded gown with feathered mermaid train was worth the price of admission alone.  During that 4 minutes, we all felt we were the “Queen of the Night.”

The creative team behind the scenes also included suspenseful lighting design from Mark Henderson, elegant  orchestrations by Chris Egan and impressive hair, wigs and makeup by Campbell Young Associates. Set and costume designer Tim Hatley may have been stretched a little thin here, credited with pulling double duty.  While the final three costume changes on Cox will dazzle, the 2 hours leading up to that were an unsatisfying collection of earth tone, asymmetrical cut sweaters and skinny jeans. When Cox as Marron walked out on stage in Ugg boots, I whispered to my companion, are we at the rehearsal or the opening?  Rachel is supposed to be a modern day glamazon.  Contemporaries Beyoncé or Lady Gaga would never be photographed dressed so pedestrian. This is theatrical musical fantasy. If this show ever does make it to Broadway, please garb her more to the role she is supposed to be playing. This show should be a fashion designer’s dream. As it is, the women in the front row had on better shoes than the star.  That will never do for the tough and fashion forward crowds of NYC!

Somewhat better than other recent film to stage productions that have played the Windy City, including musicals based on the films The First Wives Club and Beaches, The Bodyguard The Musical doesn’t establish much new ground independent of the film, which is always a problem crafting a live stage show from an iconic film.  What this show does have going for it is two dynamite leading ladies who pay remarkable vocal homage to all of  Houston’s hits. The sibling rivalry is all staged, but the vocal acrobatics from Deborah Cox and Jasmin Richardson are a uniting force to be reckoned with.  The final curtain call set to the tune  “I Wanna Dance With Somebody” brought out the full cast, cartwheeling, dancing, laughing and belting their way along with an audience encouraged to get up and participate as well.  The “Greatest Love” on display here, all aptly aimed at firmly at Houston’s legacy. 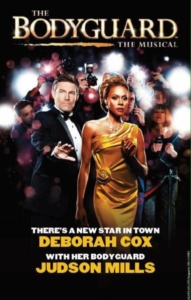 The Bodyguard The Musical is now playing through February 12, 2017 at the Oriental Theatre

Claudia PerryOctober 30, 2022
Read More
Scroll for more
Tap
T2C’s Genevieve Rafter Keddy Was At The Opening Of Comedy of Tenors
Jonah and Otto a Master Class in Acting