The Bodyguard The Musical Pays Tribute To Whitney Houston

The Bodyguard The Musical Pays Tribute To Whitney Houston 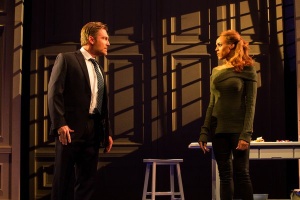 The Bodyguard The Musical opened tonight at the Paper Mill Playhouse starring Grammy nominee Deborah Cox and Judson Mills (known for his soap and TV work). The Bodyguard The Musical opened in London in 2012, with Tony-winner Heather Headley who in a lot of ways makes a lot more sense. Ms. Cox nails the songs “I Have Nothing,” “All The Man I Need,” “One Moment In Time” and “I Will Always Love You,” but she does not yet capture the magnitude of a full-blown star. At times Jasmin Richardson who plays her sister surpasses Ms. Cox in star power and vocal wattage. Ms. Cox does however have chemistry with Judson Mills and in the end we care about her. 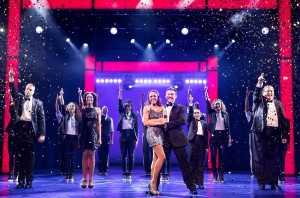 It must be daunting for any performer to step into Whitney Houston shoes. After all the film spawned sixteen hit songs, three of them were in the Top 20’s at the same time. “Run to You” and “I Have Nothing”, were nominated for the Academy Award for Best Original Song, but lost out to “A Whole New World” from Aladdin. Because of this amazing score The Bodyguard The Musical is like a Whitney Houston songbook of her greatest hits with a show written around it especially when “So Emotional,” “I Wanna Dance With Somebody” and “One Moment in Time,” added. 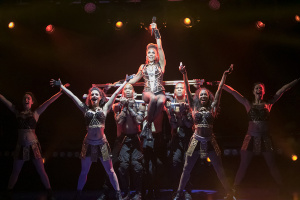 The basic love story from the film is virtually unchanged. Academy Award-nominated music superstar, Rachel Marron (Cox) is receiving threats that scares the people around her, so her manager, Bill Devaney (Charles Gray), seeks the services of a professional bodyguard. Former Secret Service agent Frank Farmer (Mills) reluctantly takes the job, but the pair initially clash. Soon those differences turn to love. As the unknown stalker seeks to harm Rachel, Frank tries to protect her. Recognizing that he has compromises his ability to protect his client, Frank breaks off their affair. Rachel who is at first hurt and angry realizes that she must put her trust in Frank for the sake of her ten-year old son (the talented and adorable Douglas Baldeo, the role is played by Kevelin B Jones III at certain performances).

The difference between the film and the musical is the film emphasis Farmer and the musical’s focus is on Marron. Also there is a love triangle with her sister Nikki (Richardson) who also falls for Frank.

Thea Sharrocks, direction is thrilling and scary. Adapted from the film’s screenplay, Alexander Dinelaris’s book makes Rachel’s stalker a muscular ex-army ranger, and it is definitely scary. I would like to see more definition between Rachel and Nikki, but the scene when Rachel and Frank are on their first date, is when the show truly comes together. The chorography by Karen Bruce is not as special as it should be and I would love to see someone like Andy Blankenbuehler or Sergio Trujillo’s take this on. Tim Hatley’s sets, have a cinematic feel, but his costumes are tacky except for the fabulous creations by Marc Bouwer. The lighting by Mark Henderson is spectacular and fabulously showy.

Despite any flaws The Bodyguard is a glitzy, schmaltzy, sing-along type show that will sell out night after night and I would not be at all surprised if it ends up on Broadway.

G. H. HARDINGJanuary 19, 2022
Read More
Scroll for more
Tap
Just Hand The Tony To Ben Platt and Dear Evan Hansen Now
Opening Night of The Bodyguard at Paper Mill Playhouse And You Are There