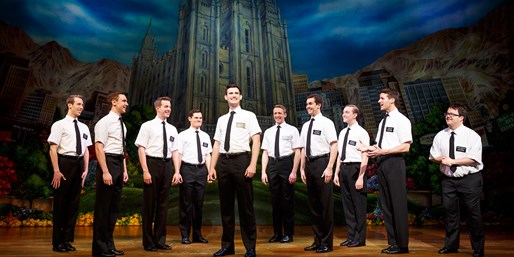 The Book Of Mormon – Hello! They’re Back!

The Book Of Mormon – Hello! They’re Back! 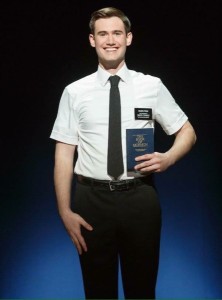 In 2011, there was nothing bigger on Broadway than The Book of Mormon. Like Hamilton is today, tickets then were pricy, exclusive and proved very hard to come by. The buzz surrounding this satirical musical helped propel Mormon to garner nine Tony Awards, including Best Musical, and a Grammy Award for Best Musical Theater Album. With a book, music and lyrics written by the creative team of Trey Parker and Matt Stone, the architects of Comedy Central’s South Park and EGOT (Emmy, Grammy, Oscar and Tony) winner Robert Lopez of Avenue Q and Frozen fame, 2011’s biggest hit, the politically incorrect, yet entirely irresistible, uproariously funny, wilderness adventure, returns to the Windy City one more time. When originally playing Chicago in 2012, The Book of Mormon broke many Broadway in Chicago Box Office records. It is now back to play, one more time, before the current juggernaut of musical theater sweeps in to, most likely, usurp its thunder. Yes, I am talking about Hamilton, Broadway’s current darling, which will run in the same PrivateBank Theatre this fall. Until then, a summertime adult audience should return to watch these enchanting Mormons with moxie play. 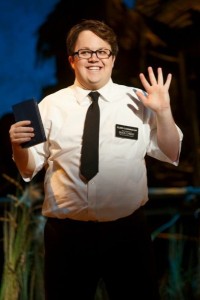 This satirical musical focuses on a pair of 19-year old Mormon missionaries, as they travel from the innocence of Utah to war torn, AIDS riddled, famine plagued, Uganda, in hopes of doing good and converting the locals to their Church. The teens in question are Elder Price (Ryan Bondy) a toothy, tall, self-absorbed, Type A, Orlando loving lad, quickly realizing he is in for far more than he ever bargained for. From the moment he greets the audience with his signature “Hello! My name is Elder Price, and I would like to share with you the most amazing book” you know this guy has more than a bit of “Donny Osmond Flair.” His sidekick for African the adventure, Elder Cunningham (Cody Jamison Strand) a chubby, self-appointed “follower” with a vivid imagination and a propensity to stretch the truth. Cunningham is excited to have both a “mission companion” and a best friend rolled into one.  Bondy is equally animated and loveable, hastily stealing every scene he is in. As the boys become acclimated with Africa, they are robbed as soon as they get off their bus, they meet the villagers they are eager to convert. Mafala (Sterling Jarvis) is the devoted father of beautiful, Nabulungi (Candace Quarrels) aka Jon Bon Jovi, Nikki Minaj, Nakatomi Plaza, Nala, Narcolepsy, Necrophilia, Neosporin and another half dozen mispronunciations by Elder Cunningham. After meeting the community’s Doctor (Melvin Brandon Logan) who has “maggots in his scrotum,” the boys are justifiably ready to return home. 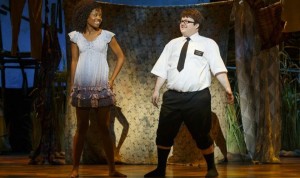 Assisting this dynamic duo with their African transition, a troupe of previously established young Mormon missionaries, lead by Elder McKinley (Daxton Bloomquist) a blonde, closeted gay, clearly on the down-low, who hastily advises them both to take their feelings of insecurity and just “Turn It Off.” This is their socially acceptable way to deal with the modern day challenges of the Mormon teachings, including domestic violence, cancer, fear and latent homosexuality. Just put those feelings in a box and then “CRUSH IT!” I did say this show was politically incorrect, didn’t I? On top of questions of faith and comradery, there is also an evil warlord afoot, the General (David Aron Damane) whose entire character name I cannot spell out. The General’s goal is to circumcise every woman in the land, in-between his murderous rages and village plundering, that is. It’s no wonder the villagers constantly sing, “Hasa Diga Eebowai” which translates to a big “F You to Heavenly Father.”  Why do I believe this show works so well? In between the ubiquitous bathroom humor and four letter words, of which there are plenty, there is sincerity, naiveté and legitimate heart on display. The core values of family, both biological and chosen, friendship, forgiveness, companionship and service are prevalent. As Nabulungi sings “Sal Tlay Ka Siti” (Salt Lake City) the promise and longing for an earthbound paradise, “Sal Tlay Ka Siti, The most perfect place on earth. Where the flies don’t bite your eyeballs and human life has worth.” 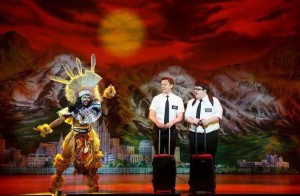 It is hard to pick out a single musical highlight, as each number provides so much return on your theater going buck. Early on “Two By Two,” establishes the teams will soon be traveling the globe spreading the word of Jesus Christ of Latter-Day Saints. With frenetic choreography by Casey Nicholaw, the laughter erupted early with lyrics including “France, land of pastries and turtlenecks. Japan, land of soy sauce and Mothra! And your mission location is Uganda! Oh Boy…Like Lion King!” The end of Act one’s “Man Up,” and Act two’s “Making Things Up Again” and  “Spooky Mormon Hell Dream” included cameos by a litany of popular culture icons including likenesses of Star Wars’ Yoda and Darth Vader, Star Trek’s Uhura, Middle Earth’s Hobbits, Adolph Hitler, Genghis Khan, Jeffrey Dahmer, Johnnie Cochran and Satan, just to name a few. I defy anyone to refrain from giggling during the delusional and self-reliant, “I Believe,” as Elder Price grasps hands with the criminal Warlord General,  “I believe that in 1978 God changed his mind about Black People!” or as the lily white Mormon squad revels in the fact, “I Am Africa” including “I am Africa! Just Like Bono! I am Africa! I flew in here and became one with this land!” while adorned in crisp, snowy white costumes, crafted by Ann Roth. There is even a little romance brewing for “Baptize Me” as Nabulungi cries out  “I’m wet with salvation” at the hands of Elder Cunningham. By the conclusion of the uproarious “Joseph Smith American Moses,” a tribute in song and dance by the villagers to the Elders of the Church, based on the outlandish and warped stories Elder Cunningham shared with them, it is definitive, the nine Tony wins were well deserved. 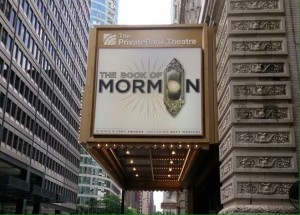 Directed by Casey Nicholaw and Trey Parker, The Book of Mormon has outlandish laughs a plenty, set against a ravaged African nation. Scott Pask’s spectacular scenic design impressed as did the potent lighting design’s of Brian MacDevitt. As the show reassures, tomorrow may indeed be a “Latter Day,” but for today, you should go see this deserved Broadway hit tour while you still can. Sidesplitting humor, rambunctious choreography, and rapid-fire, knee slapping one-liners, peppered this feel good festival for the senses. In closing, set against the realities of a high-stakes and acrimonious election year, “You and Me (But Mostly Me)” vote Mormon for most popular! 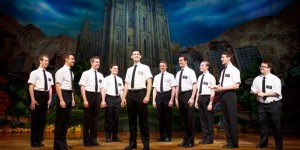 The Book of Mormon is now playing at the PrivateBank Theatre through August 14, 2016.