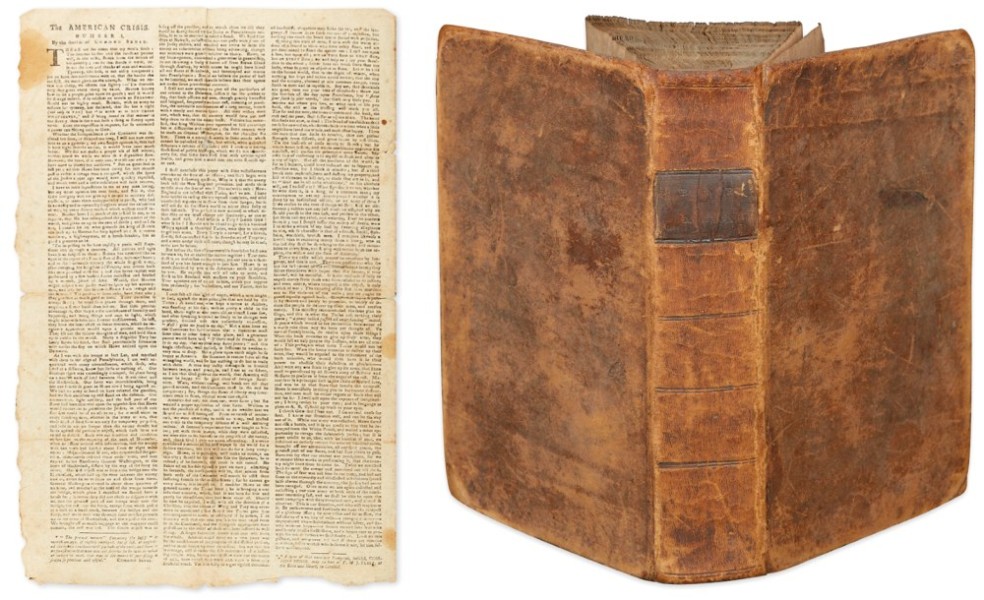 Suzanna Bowling
A rare first edition of The Book of Mormon sold to a collector for $67,500.
The 1830 first edition of the Book of Mormon,  went for more than the last 17 copies on the auction market. In a 2008 sale at Swann Gallery’s it sold for $75,000. Swann holds the record for this rare true first edition, set in 2007 at $180,000. What makes this edition unusual is that it is the only one to list Joseph Smith as the “author and proprietor” rather than the translator. Mormon-related documents continue to perform well, with the diary of a Methodist preacher named Benajah Williams, in which he describes a meeting that may have inspired Smith’s first vision, selling for $13,750. Additional Mormon highlights included a published response by Joseph Smith to a letter from J.A. Bennett, 1844, which sold for $6,750, and a letter by Wilford Woodruff describing the Mormon settlement and the development of Utah, 1877, which reached $25,000.

Sale prices for Revolutionary War material were even stronger than usual, with several lots going many times above their high estimates. Notably, a newspaper printing of Thomas Paine’s 1777 American Crisis brought $37,500, while notes taken during the 1782 Continental Congress by member Arthur Middleton, which include the first reference to Vermont’s statehood, sold for $55,000.

Works from the Timothy Treacy collection of historic Californiana performed well in the sale, selling over 90% of the 35 lots offered and setting numerous auction records. An inscribed first edition of Clarence King’s Mountaineering in the Sierra Nevada, 1872, brought $8,750, a record for the author. Another record was $2,750 for a first edition of Charles F. McGlashan’s History of the Donner Party, 1879. A portfolio of photographs of the Sierra Nevada Mountain Range from the 1930s by Clinton C. Clarke sold for $9,375, over six times the high estimate, while a first edition of Thomas J. Farnham’s Travels in the Californias, and Scenes of the Pacific Ocean, 1844, doubled its estimate to sell for $8,125.

Another record was set by a rare 1796 illustrated Bible, published in Philadelphia by Berriman & Co., which sold for $1,500.

Institutions did very well at the sale. Most notably, the Society of the Cincinnati won a 1776 orderly book detailing the defenses of New York; the South Caroliniana Library at the University of South Carolina bid successfully on an important 1782 Henry Laurens letter; the Massachusetts Historical Society won an anti-abolition broadside by George Francis Train, 1862; the New-York Historical Society won three lots including a group of Holland Tunnel blueprints; and the Connecticut River Museum acquired a diary by river pilot John Ingraham.

Book Department Director and Americana Specialist Rick Stattler said, “Prices remained strong, particularly for Revolutionary War material, reflecting a busy week—we had a large crowd waiting at our door when the preview opened. Private collectors were very active in the sale, picking up four of the top ten lots.”

Suzanna BowlingJanuary 6, 2022
Read More
Scroll for more
Tap
My View: You Want The Best? You Know The Rest – John Pizzarelli & Jessica Molaskey
Happy 12,000th Performance To The Phantom Of The Opera