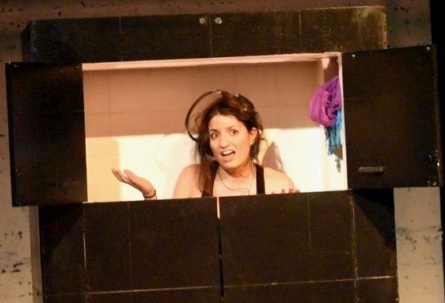 The Box Show: Fun and Entertaining

The Box Show: Fun and Entertaining

Written and performed by Dominique Salerno, The Box Show is a fun and ad hoc collection of characters with one thing in common: the box.

At first glance, the small elevated box (designed by Ann Beyersdorfer) is not particularly fantastic. As characters emerge from the box, it becomes clear that the box is a marvel. It looks so small, and yet not only does it hold a full grown human (with space for her to move in it) it also holds all of the props – most of them basic costume pieces, and maybe an extra pair of feet.  Using the doors of the box to her advantage, Dominique Salerno creates different characters and even “scenery.” The box is not only a scenic element, it is a concept and it is a character itself. 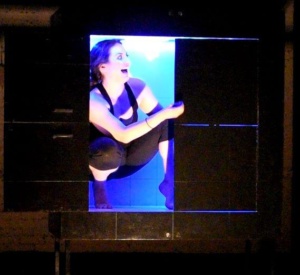 Dominique Salerno in The Box Show

Salerno is clearly a very talented performer. Her versatile vocals differentiate the wide range of characters and her singing voice is impressive. The creativity and humor she demonstrates by confining herself to a box is both charming and entertaining. Using her entire body (surprisingly), her movement and facial expressions make her larger than life. Director Sash Bischoff has Salerno moving in unexpected and exciting ways. Just when you think she has exhausted her options of how to use the box, she does something new and different.

Transitions between each sketch were often very slow. I realize that technically speaking it may be difficult to do anything about this, but we are sitting in the dark for 15 seconds or more. When there is nothing to look at, those seconds feel like an eternity. Lighting designers Cheyenne Sykes and Brandon Bagwell have outfitted the box with lights, and when the box lights up from the inside, it is exciting. The range of color we experience front light inside the box is impressive. These lights and the music helped to fill the transitions. 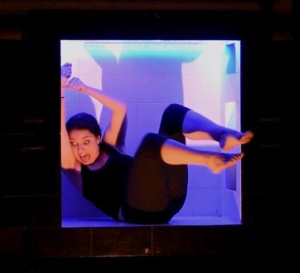 Dominique Salerno in The Box Show

Of all the characters, the sketch of Frida Kahlo feels out of place. She is the only celebrity character, while the rest, though specific, are made up or stock characters. If her international pop star were Tayor Swift, or if her tunnel-searching conspiracy theorist was Pope Francis – it might make sense to have Frida Kahlo. The closest Salerno comes to portraying other “celebrities” is Achilles and Odysseus. This show is clearly not a collection of celebrity sketches.

The sketches are humorous in many different ways. Some sketches are narrative, some invoke slapstick, others are witty, while still others rely on mime and choreographed movement. It’s easy to enjoy and laugh to this quirky show. While I was not amused by the Frida Kahlo sketch or the sitting in the dark, I was able to escape into these characters and their fantastic worlds.