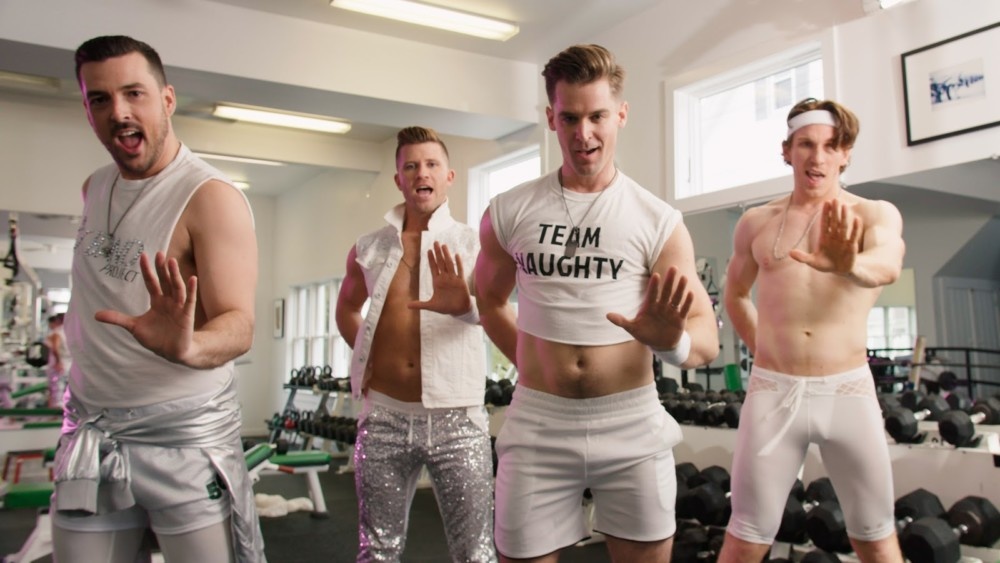 Just in time for summer, Travis Nesbitt, The Muse Presents and composer Michael Mott are thrilled to release their first visual/single “Get Behind My Love” from contemporary boy band cover group, The Boy Band Project.  “Get Behind My Love” is available now for streaming and download through iTunes and Youtube.

Marking their first venture into original content, “Get Behind My Love” is a modern day take of “Let’s Get Physical” from the all-gay boy band that pays homage to your favorite NSYNC and Backstreet Boys music videos with their own super sexy flair. The song, composed by Michael Mott and produced by Richard James,  features band members  Travis Nesbitt, the boy next door; Nic Metcalf, the sporty one; Kevin Raponey, the sensitive one; and Jesse Corbin, the bad boy.  The music video was directed by Nathan Chang of Halleloo productions and shot at Mussel Beach Gym in Provincetown with a cameo by P-Town favorite Thirsty Burlington.

The Boy Band Project will headline The Paramount (247 Commercial St, Provincetown, MA) this summer during Carnival Week, August 19, 20, 21, 23, 24, and 25, with all shows at 8:45 PM.  Tickets are currently available HERE. (https://onlyatthecrown.com/entertainment)

Recently seen on “Good Morning America,” headlining on Atlantis Cruises, and as cover boys for the NYC Pride issue of GetOut Magazine, The Boy Band Project, is an all gay, scintillating, boy band cover group that re-imagines the sound, movement, and energy of NSYNC, Backstreet Boys, Hanson, One Direction, 98 Degrees, O-town, BoyzIIMen, Jonas Brothers and more. This musical thrill-fest features a group of boys direct from Broadway’s Wicked, Hairspray, Mamma Mia, The Book of Mormon, Altar Boyz, and Rock of Ages.

Michael Mott (Composer) has written, produced and recorded two full length studio albums of his original theatre, pop and jazz material sung by some of the best vocalists from Broadway, television and film. His discography includes the full length studio albums, Where The Sky Ends and Abandoned Heart, several dance remix EPs, including Gone (feat. Ben Fankhauser), which has received over 3 million streams on Spotify, Christmas, Will You Stay? (featuring Tony Award nominee, Laura Osnes) and several other stand alone singles. His full discography is available everywhere music is sold. MichaelMott.net | @Michael_Mott

Morrison Hotel Gallery Rocks Out with the Rolling Stones in the Exhibition Keith, Unfiltered.﻿
Cabaret in June is Busting With Talent and Exciting Events