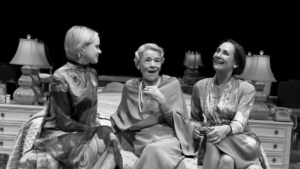 On May 17, Edward Albee’s Three Tall Women will play a special Midnight Performance as a benefit for The Actors Fund. The production, directed by Joe Mantello, opened on Broadway on March 29 to ecstatic reviews. Last week, Mantello’s production of The Boys in the Band started previews on Broadway. To celebrate their director and the vital work of The Actors Fund, the entire cast of The Boys in the Band will host the Midnight Performance of Three Tall Women,

Tickets for the May 17 Midnight Performance for Three Tall Women are available at actorsfund.org.

The production marks Ms. Jackson’s long-awaited return to Broadway after a 30-year absence. Her first Oscar came in 1970 with Ken Russell’s film Women in Love. She went on to star in film classics such as Sunday Bloody Sunday and A Touch of Class, for which she was awarded her second Academy Award. In 1971, Ms. Jackson starred as Queen Elizabeth I in the BBC serial “Elizabeth R,” for which she was awarded her two Emmy Awards. Ms. Jackson began her stage career as a member of the Royal Shakespeare Company. She made her Broadway debut in 1965 in The Persecution and Assassination of Jean-Paul Marat as Performed by the Inmates of the Asylum of Charenton Under the Direction of the Marquis de Sade, and went on to star on Broadway in Rose(1981), Strange Interlude (1985), and Macbeth (1988). She has received a Tony Award nomination for every one of her Broadway performances. Most recently, she caused an international sensation in the title role in Shakespeare’sKing Lear at The Old Vic in 2016, for which she received an Olivier nomination and a Critics Circle Award for Best Shakespearean Performance. In addition to her legendary acting career, Ms. Jackson spent 23 years as a Member of Parliament, and was made a Commander of the British Empire in 1978.

Ms. Metcalf most recently starred on Broadway in A Doll’s House, Part 2 as Nora Helmer – a role that earned her critical raves and a 2017 Tony Award for Best Actress in a Play. For her performance in the movie Lady Bird, she received Academy Award, Golden Globe, and SAG Award nominations and won the National Board of Review Award, the National Society of Film Critics Award, and the Los Angeles Film Critics Association Award for Best Supporting Actress. Ms. Metcalf is an original member of Steppenwolf Theatre Company in Chicago. Ms. Metcalf has been nominated for three other Tony Awards for November, The Other Place, andMisery. She received three Emmy Awards for her work on the television series “Roseanne.” Her film roles include Desperately Seeking Susan, Leaving Las Vegas, Uncle Buck, JFK, Internal Affairs, and the Toy Story series.

Ms. Pill received a Tony Award nomination for Best Actress in a Play for her Broadway debut in The Lieutenant of Inishmore. Her other Broadway appearances include The House of Blue Leaves, The Miracle Worker, and Mauritius. Off-Broadway credits include This Wide Night, reasons to be pretty, the American premiere of Blackbird, and the American premiere of The Distance from Here, for which she and her co-stars won the Drama Desk Award for Outstanding Ensemble Performance. On television, she was most recently seen in “American Horror Story: Cult.” She was a series regular on the acclaimed HBO series “The Newsroom” and the second season of the HBO drama “In Treatment.” Her film credits include Miss Sloane;Zoom; Hail, Caesar!; Snowpiercer; To Rome With Love;Midnight in Paris; Goon; Scott Pilgrim vs. the World; Milk;Dan in Real Life; Dear Wendy; and Pieces of April.

Mr. Mantello won back-to-back Tony Awards for his direction of Take Me Out(2003) and Assassins(2004) and has also been nominated for Tony Awards for his direction of Love! Valour! Compassion!(1995), Glengarry Glen Ross(2005), and The Humans(2016). His other Broadway directing credits include Blackbird, An Act of God, The Other Place, Other Desert Cities, November, Wicked, and Frankie and Johnny in the Clair de Lune. As an actor, he received Tony Award nominations for his performances in Angels in America: Millennium Approaches(1993) and The Normal Heart(2011). He also received Emmy Award and Critics’ Choice Award nominations for his performance in HBO’s “The Normal Heart.” He is the recipient of Outer Critics Circle, Drama Desk, Lucille Lortel, Helen Hayes, Clarence Derwent, Obie, and Joe A. Callaway Awards.

The Actors Fund is a national human services organization that fosters stability and resiliency, and provides a safety net for performing arts and entertainment professionals over their lifespan. Through offices in New York, Los Angeles and Chicago, The Fund serves everyone in film, theater, television, music, opera, radio and dance with programs including social services and emergency financial assistance, health care and insurance counseling, housing, and secondary employment and training services. Visit www.actorsfund.org.