The Boys Upstairs – A Rom-Com Timed for Pride

The Boys Upstairs – A Rom-Com Timed for Pride 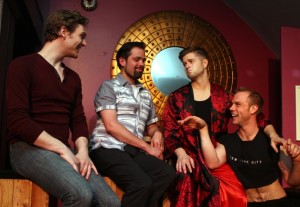 As June has arrived upon us, so has PRIDE, a month long celebration dedicated to acknowledging the LGBT lesbian, gay, bisexual and transgender community, while commemorating the Stonewall Riots in New York City. Festivities in and around the greater Chicago area include concerts, festivals, a parade and the Chicago premiere of writer Jason Mitchell’s popular New York fringe show, The Boys Upstairs.  Boys tells the tale of a trio of college friends, all of whom happen to be gay, who reunite for a weekend of cocktails and courting. The action all takes place in the living room of a Hell’s kitchen walk up, where a set of social climbing urban gays dwell and detail in their dating foibles.  Pride Films & Plays director David Zak clearly had a ball at the helm of this nouveau riche romantic comedy, with its hopeful heart beating beneath complicated love triangles and forgettable one-night stands. With the pacing of a standard sitcom, the ground broken here may not be new, but it is certainly endearing. 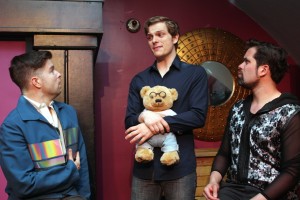 Roommates Josh (Nelson Rodriguez) an internet blogger and developer of an app, which he hopes will bring him unlimited riches, and Seth (Gary Henderson) a grade school teacher and serial monogamist, anxiously await the arrival of their college friend, Ashley (Shaun Baer) a slutty southern belle fashionista, obviously drawn in the long shadow of Rue McClanahan’s The Golden Girls character, Blanche Deveraux. Much more frenemy then friend, all the action starts upon Ashley’s glorious arrival. Just back from Paris and looking for a place to relocate, Ashley crashes at Josh and Seth’s apartment, using the living room couch as a rotating conveyor belt of one night stands and regrettable hook ups. A slapstick competition begins between Josh and Ashley when a sexy new neighbor, Eric (Tristien Winfree) moves in downstairs and knocks on their door to borrow a screwdriver.  Insert a series of obvious sexual double entendres here.  Sporting a slim fitting tank top and tight jeans required to be an object of lust, the boys start a game of is he or isn’t he?  Gay that is. “Two cocktails and he’s a mess. He is clearly NOT gay” quips horny, Steel Magnolia Ashley. Completing the mix, hardworking Luke Meierdiercks exercises his mighty comedic muscles, portraying an array of bad boyfriends and questionable one night stands for all three of the show’s leading men.  From Leather Daddy to Doctor, Boy next door to Broadway Queen, “Gabriel……My friends call me Gaby.”  Meierdiercks consistently delivered reliable and recurrent laughs. His Act 2 Broadway dancer monologue, romantically and wistfully quoting from dozens of The Great White Way’s biggest hits, including lines from Wicked, If/Then, Cats, West Side Story, Lion King, Rent and a dozen or two more, is the side-splitting, rib-tickling, doubled over, raucous laughter, highlight of act two if not the entire show. 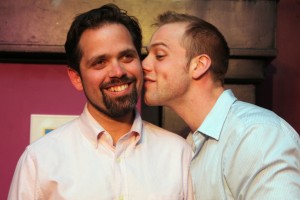 A witty, intentionally pop culture soaked script is Boy’s winning stroke, including lines such as “We met at the event, Gays to Dump Trump” and “What do you want more than Barbara to return to The View?” landed quite effectively. Ashley, the most exaggerated of the characters does get the most to work with as far as clever one-liners go. “Are you in a relationship, or a cult?” landed louder then necessary audience chortles.  Gary is clearly the most grounded of the group, with Josh landing somewhere in between. After a disagreement, Seth proclaims “You sound like a compassionate Karen Walker?” to wit Gary asks ……“Who?” What second grade teacher, or gay man for that matter, doesn’t know Megan Mullally’s sassy sidekick, Karen from Will & Grace?  The same joke was made shortly after, this time about “SJP.” “Who?” he again declares. What team of self respecting gays in New York City doesn’t know stylish icon, Sarah Jessica Parker, or Sex and the City, the show that made both she and dating in Manhattan a star?  Especially since it is blatantly obvious this show owes a great deal of its inspiration and inception from the musings of Carrie Bradshaw and the girls. The graphic sex talk on display is also closely modeled off the HBO, Emmy winning hit, and graphic sex talk there is.  Mostly played for sitcom style laughs. Utterly distinctive, the contemporary hits injected between scene changes. I counted Rupaul’s “Glamazon,” Taylor Swift “Wildest Dream,” and Ariana Grande’s “Dangerous Woman” as part of the show’s elusive soundtrack. 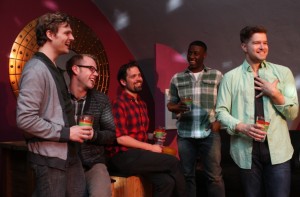 The Boys Upstairs is a rowdy and raucous, unapologetic and humorously exaggerated look at the love lives of a troika of gay men in NYC. Following the romantic comedy playbook, of course there is a happy ending for all involved. Earnest and endearing, I forgave the short comings of the story during the final couple’s first kiss. I will respect that couple’s identity for the ticket buying public.  Suffice to say, I think all will enjoy the When Harry Met….um…Stanley conclusion. The Mary’s Attic Theatre may be an intimate space, but Mitch Anthony’s set design, Emma Dean’s lighting and real world costume design from Kat Sass make the most of their workspace. Silly and sweet, The Boys Upstairs is a textbook addition to the merriment month long, city wide Pride Celebration.

The Boys Upstairs is now playing at Mary’s Attic Theatre through July 2, 2016 RossDecember 19, 2022
Read More
Scroll for more
Tap
Step Into Summer With The New York Spectacular And The Radio City Rockettes
Countdown to the Tony Awards – Nominees Light Up Empire State Building In Honor Of 70th Anniversary