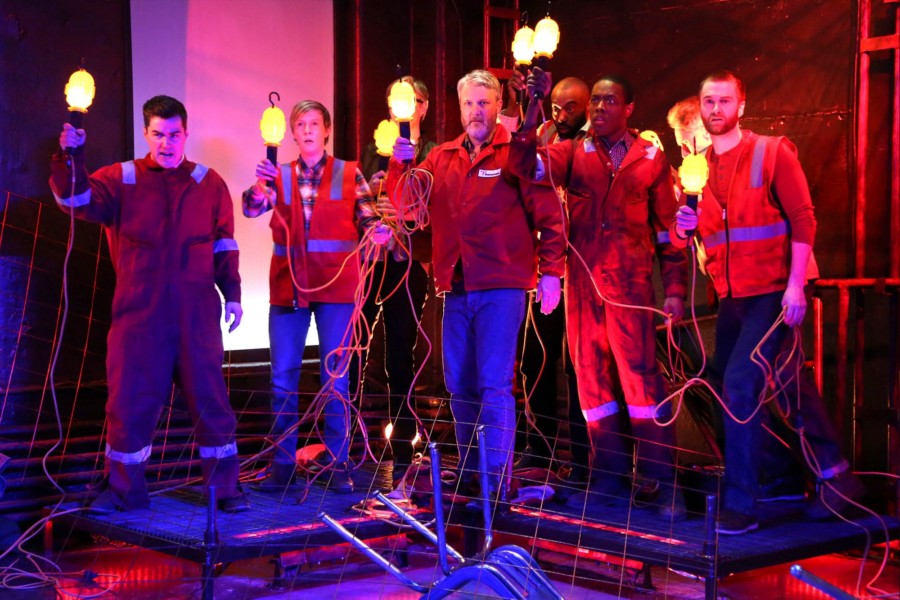 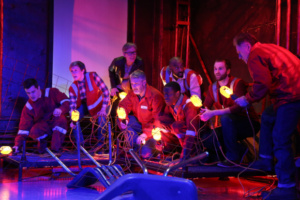 Leigh Fondakowski’s Spill at the Ensemble Studio Theatre is a riveting, devastatingly real drama about the BP oil spill that took eleven lives, injured seventeen others and catastrophically changed the lives of countless others humans, the environment and the eco system. Fondakowski conducted more than 200 hours of interviews, researching, using the documentation available and has brought to life the people who lived, died and were effected by the Macondo Deepwater Horizon oil platform that collapse April 20, 2010. 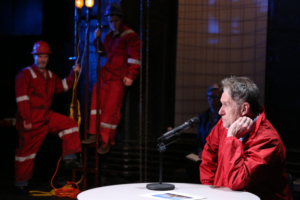 Spill starts out as one of the wives (Molly McAdoo) of the deceased is being interviewed (Kelli Simpkins). She brings to focus and to memory her husband, their engagement, their life and their love. Later on we learn during their last good-bye, she knew he shouldn’t have left, that somehow it was their last kiss. When still hoping for her husband to come back, her 5-year-old daughter tells her that her father has visited and that he is not coming back. Many of the wives, mother’s and father’s could not believe their loved ones were gone.

We learn The Macondo drill, was named after the ill-fated town in Gabriel Garcia Márquez’s One Hundred Years of Solitude and was known as the “Well from Hell.”One the day of the disaster around 10:30 in the morning, a helicopter flew in four senior executives—two from BP and two from Transocean, to celebrate the well’s completion and the rig’s seven years without a serious accident. Both companies due to “profit-driven decisions” during the drilling of the well created the deadly blowout due to “gross negligence” and “wilful misconduct.” The men who died knew this, as the operation records clearly showed excessive economic and schedule pressures resulting in compromises in quality and reliability. To make matters worse the BP executives were playing video games right before the blowout. With the explosion methane gas was released into the air, people, the ocean and the rig were engulfed in a sea of flames. Mud created a “ black rain.” The workers struggled to reach the two usable lifeboats, but some simply leaped into the sea 75 feet below. In the play this is conveyed with chains clanging and dropping thanks to Sarah Lambert realistic yet minimalistic set, haunting and exquisite lighting by Nick Francine, terrifying sound design by Lee Kinney and the fear of the actors caught up in this tragedy. Many swam in fire and oil until rescued.

Tony Hayward, former chief executive of BP gives evidence, as we see BP initially keeping the secret of truly how much oil has actually been spilled. We hear how the coast guards were bought off by BP and who really runs this country.

A father whose son didn’t have a mean bone in his body to become a lawyer like he was, died in the disaster. The father furious at what BP has done fully intends to make BP pay. In the end, 200 million gallons of crude oil was pumped into the Gulf of Mexico for a total of 87 days, making it the biggest oil spill in U.S. history. 16,000 total miles of coastline have been affected, including the coasts of Texas, Louisiana, Mississippi, Alabama, and Florida. Oil is still washing up onto the shores, causing long-term damage. Over 8,000 animals (birds, turtles, mammals) were reported dead just 6 months after the spill, including many that were already on the endangered species list. The company shows this by piles of wires that tangle as they brush against the floor. One man speaks about his greed to make $300 dollars a day and what that cost his health when he joined the clean-up operation. Again another BP disater.

Greed, is at the heart of this play. The Obama administration failed to act and fully inform the public of the BP spill keeping the American people in the dark for weeks about the size of the disaster. Our government told the public the flow rate was 5,000 barrels a day for more than a month, even though BP officials and government scientists acknowledged that the rate could be as high as 110,000 barrels a day. President Obama then invites the relatives who have lost loved ones to the White House, but it is clear he is there strictly for show and tell. He shows no concern for the victims. He sanctions for a no off shore drilling, but 15 months laster BP was back and resumed drilling. Nancy Pelosi, was the only one who really spoke to the victims’ families in depth.

Our dependency on, fossil fuels was the foundation of this disaster. Today this incident and the eleven men are basically forgotten. Bp continues to wreck havoc and environmental catastrophe is looming.

Spill is a must see, in this political climate. It speaks to what can happen again, if we do not pay attention to Mother Earth. As humans we are driven by greed and excess and the consequences could wipe us all off the planet. When leaving Come From Away earlier this week I was filled with hope, in leaving Spill I was left bereft with a renewed sense that we need to revisit history before there is nothing left.

Magda KatzSeptember 13, 2020
Read More
Scroll for more
Tap
Who Would Be King: Challenging and Entertaining
When It’s You: When It’s Really About Him and Her