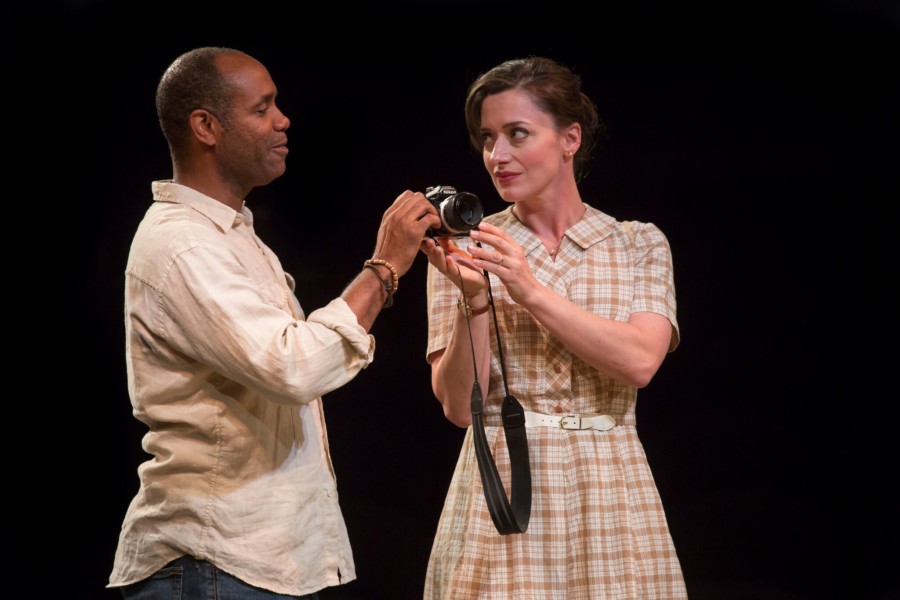 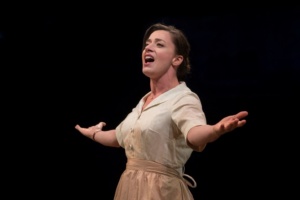 Set on a remote farm, The Bridges of Madison County originated as Robert James Waller’s 1992 best-selling romance novel, then turned into a feature length film starring Meryl Streep and Clint Eastwood, and finally refashioned into a full scale musical, adapted by book writer Marsha Norman and three-time Tony Award-winning composer Jason Robert Brown. To be fair, the Broadway staging of this romantic journey of passion and infidelity tanked during its initial run on the Great White Way, closing after a run of just four brief months. Featuring the talents of pre-Tony Award-winning actress Kelli O’Hara and the dashing Steven Pasquale in the titular roles, this story never really connected with a wider audience. Now fast forward a few years and Bridges is back, being remounted at the Marriott under the watchful eye of director Nick Bowling. This theater in the round venue works surprisingly well for this “Paris on the Prairie” love story. 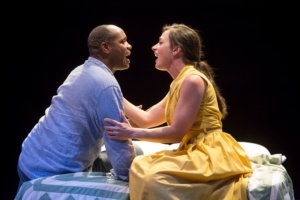 The terrific twosome leading this cast is Kathy Voytko and Nathan Stampley, both talents well worth the price of admission. Listening to Stampley sing is as close to perfection as you are going to get. Voytko plays the dedicated Italian war-bride, Francesca Johnson, who fled a war torn Europe for a simpler, borderline monotonous life on the farm with an American GI, and later their two children. With the family heading off to the 4-H Fair in neighboring Indianapolis, Francesca decides to stay back for a few days of peace and solitude on the farm. Enter Robert Kincaid (Nathan Stampley) a National Geographic photographer who pulled into her driveway by happenstance, hoping to ask for directions, instead permanently altering the trajectory of their lives forever. While accompanying Robert to scout the location of the neighboring picturesque covered bridge, the mysterious seventh Roseman Bridge, fettered burgeoning flirtation quickly lead to romance. Their torrid passion ignited over the hauntingly lovely, Tony Award-winning score. Jokingly sharing with her new beau, “the patron saint of Iowa housewives sent you to me” it isn’t long before Francesca has to chose between the fiery passions of this wild new romance versus the daily obligatory duties of wife and mother. 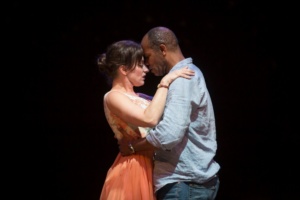 Honestly, the story plays overly long, however many unique nuances here enhance the experience. Scene-stealing, next door neighbor Marge, played with gusto by Wydetta Carter, inspired copious laughter from the audience throughout. Either while toting her over-sized binoculars, after all this sleepy 1965 Iowa town was filled with people who were “either working or looking out their windows” or with a well-timed spare lasagna, thankfully in hand, Carter’s Marge helped to quickly dissolve any tensions arriving in the story. Set designer Jeffrey D. Kmiec’s work included a collapsible bridge, assembled throughout the production, mid-song and center stage, that thoroughly impressed. Anthony Churchill’s lush background projections surrounded the environment, much like driving through the rural Midwest. Sally Dolembo’s costume design was backwater chic, and Ryan T. Nelson’s Music Direction, sublime. 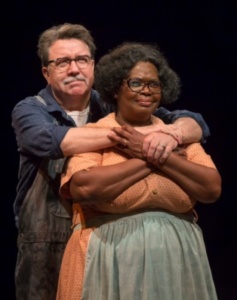 The crossroads of romance versus obligation is at the heart of The Bridges of Madison County musical. Whether viewed as passionate or adulterous, there is no debate in my mind to the fact the dynamic duo that is Kathy Voytko and Nathan Stampley are the primary reason to see this show. Their precarious liaison is the thing staged-dreams are made of. Focusing more on the secret romance between the two instead of the inevitable fallout of an interracial romance in the mid-1960’s, or the tearing apart of a family due to an indiscretion, Bridges plays like the equivalent to one of those insatiable summer paperback beach reads. With that said, the subtle and poetic score will stay with you long after the sun has set. 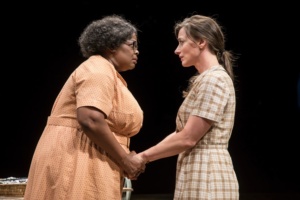 The Bridges of Madison County is now playing at the Marriott Theatre through August 13, 2017