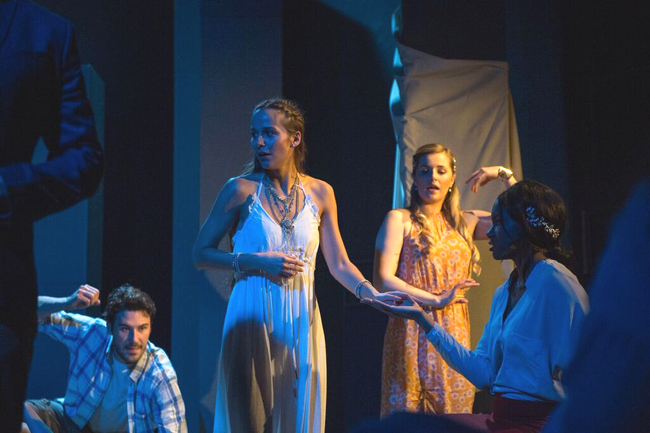 The Briefly Dead Lost In Hades

The Briefly Dead Lost In Hades 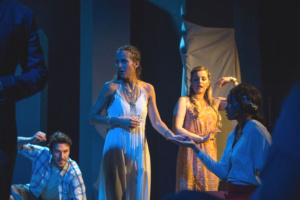 Stephen Kaliski’s The Briefly Dead, now playing at 59E59 is a contemporary version of the Greek tragedy Euripides.

In the original version King Admetus’s time is up, but Apollo persuades the Fates to reprieve Admetus of death if he can find someone to die in his place. His beloved wife Alcestis instead died for him. Admetus discovers that he actually does not want to live without her and Heracles enters Alcestis’ tomb and steals her back. 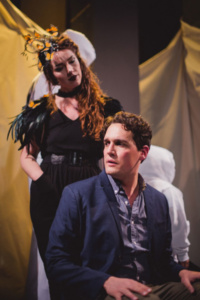 In this version Ademetus is now named Admetos’ (Ben Kaufman) and in escaping in haste, Heracles (Paul Hinkes) has left behind Alcestis’ (Jenna Zafiropoulos) memories in a trunk. He has also purposely left a memory of his own behind. Death (Mia Isabella Aguirre) annoyed that she has been deceived is blowing off steam in hades. In this version, she is also God’s boss, though that is never explained as to how that happened.

Admetos, is none to thrilled with the new Alcestis, who is not the wife he remembers. Alcestis, her sister, Zena (Katie Proloux), her bestie, a empty-headed Kyra (Sarah Wadsley) and her friend Phyllis (Sodiya Cheyenne) try to help her remember, but this is a soul who is pissed she has returned.

Turns out, Alcestis was not the mother of the year, as we see through Balinese shadow puppets designed by director Elizabeth Ostler. She also suspects that the king’s assistant, Avra (Kristin Fulton), is sleeping with him. When her trunk of memories is retrieved Alcestis confronts the two of them, longing to return to hades. Seems this was not an act of love, but one of escaping.

Though the idea’s displayed in this piece are interesting, they are not executed well. The actors all seem in different plays. Ms. Aguirre is too broad, but at least she keeps our attention. Ms. Zafiropoulos has a nice presence but she goes from silent to screaming in less than zero seconds, as does Mr. Kaufman and Mr. Hinkes. There seems to be no middle ground for these actors. Yet, Ms Zafiropoulos keeps the context and the feel of this piece.

The writing is broken up into numerous scenes, so that we never get to the heart and the soul of what the writer wants us to know. It is also confusing when the show breaks into rock numbers for no reason. The set by Kyu Shin manages to set the tone, where the costumes by Peri Grabin Leong are a mix and match of today and the time period of the play.

The Adjusted Realists is a company to watch, but they need to fine tune their storytelling.