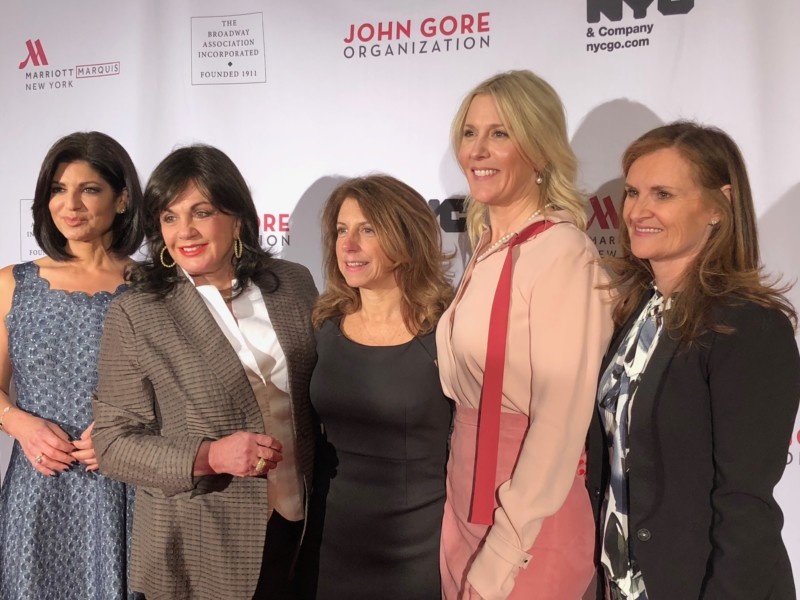 The Broadway Association, a 108-year-old not-for-profit business association committed to the betterment, safety and economic prosperity of the Times Square and Midtown West communities, hosted its annual awards luncheon on Wednesday afternoon, at the New York Marriott Marquis.

The awards luncheon also featured performances from the Tony-nominated musical Hadestown, by Singer-Songwriter Anaïs Mitchell and Director Rachel Chavkin, along with the Alanis Morissette-inspired Broadway musicalJagged Little Pill, with actresses Celia Gooding and Lauren Patten to celebrate the honorees.

Kelly Ann Curtin has been in the membership, sales and meetings & events industry for over 20 years, first joining NYC & Company in 1997.  Ms. Curtin oversees NYC & Company’s membership growth and retention, destination services strategy along with NYC & Company’s official publications.  Kelly serves on numerous boards including the Broadway Association, the Lower Manhattan Marketing Association, Big Apple Greeter and many others.

Lauren Reid is a 25-year entertainment industry veteran who continues to develop The John Gore Organization (JGO) into a premiere live theatre and interactive company. JGO is the leading developer, producer, distributor and marketer of Broadway theatre worldwide whose family of companies includes Broadway Across America, Broadway.com, The Broadway Channel, BroadwayBox.com and Group Sales Box Office. Lauren rejoined Broadway Across America in 2010, and most recently served as the CEO – Theatre Division. During her earlier tenure, she rose through the ranks at PACE, SFX, and Clear Channel Entertainment, holding many executive positions. Lauren is an active member of The Broadway League where she serves as Vice Chair of the Road and on its Executive Committee and the Board of Governors.

“Kelly and Lauren are the rock stars of tourism and theatre in New York City,” said Cristyne Nicholas, Chairman of the Broadway Association. “Thanks to their charisma, passion and energy, New York City continues to expose new audiences to its rich arts and culture landscape across the country and around the world.”

The annual luncheon also serves as a platform for the Broadway Association to promote and support an important cause within the local community.  This year, the Broadway Association made a donation to the Jimmy Awards, which has enabled over $2 million in scholarships to talented students across the country, several of which have already been cast in Broadway, Touring and West End productions.   Other programs, initiatives and charities the Broadway Association has supported in previous years include the New York City Police Foundation, the Actor’s Fund, Encore Community Services, the 9/11 Memorial, Rosie’s Theater Kids, Broadway Care/Equity Fights Aids, theAlzheimer’s Association, the Theater Development Fund, Vocal Ease and more.

For more information on the Broadway Association, please visit www.broadwayassociation.org.

Suzanna BowlingFebruary 1, 2023
Read More
Scroll for more
Tap
As the Fridge Hums, So Does Curse of the Starving Class at Signature
Inside the Outer Critics Circle Awards with Walter McBride