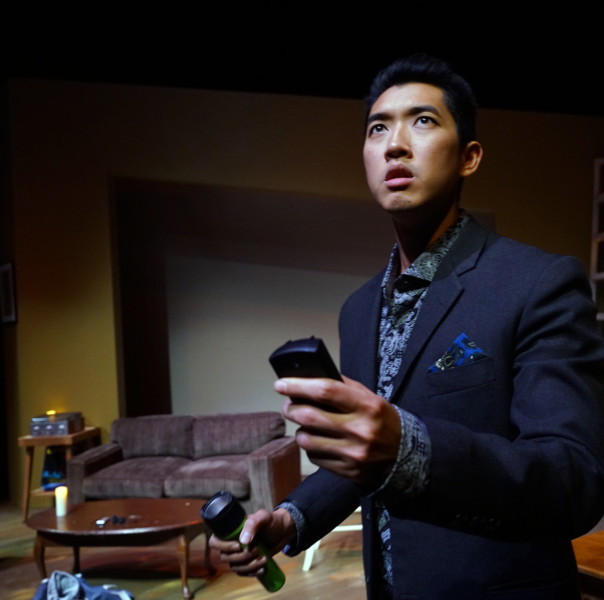 Two Thai brothers, Max (Vin Kridakorn) and Visarut (Roy Vongtama), run a small business investigating paranormal activity, and they live with their mother, Tasanee (Emily Kuroda). They haven’t booked any clients for months when Delia (Dawn L. Troupe) employs them to discover and hopefully excise the ghost of a young Thai woman (Natsuko Hirano) who has been appearing in her house. Delia’s husband, Felix (Brian D. Coats), doesn’t experience the ghost the same way Delia does, and despite his skepticism he wants Delia to feel safe. As he navigates his mother’s advice, and Felix’s concern for Delia, Max stumbles through the investigation – a journey which ultimately prepares him for the rest of his life.

The scenic design by Sheryl Liu literally draws you into the story – the angles of the walls give the impression that the story is larger than life. At the same time, there is a diminutive effect to how the scenic elements draw the eye to the exact spot where the action occurs. Using this to his advantage, director Jeff Liu creates strong and interesting stage pictures despite employing a low percentage of stage space.

As a horror story, the production wouldn’t be complete without special effects. Designed by Steve Cuiffo, the seemingly few special effects are exactly enough to give the production a thrilling edge. To aid these effects is music and sound. While they may seem a bit cliché, the sound design by Ian Wehrle – everyday sounds that suddenly take on new meaning, suspenseful music and incoherent whispers – maintains the mystery, foreshadows the worst, and marks the beginning and end of paranormal action. With a simple and perhaps limited lighting plot, lighting designer Victor En Yu Tan delivers clear distinctions between paranormal activity and normal activity.

As an ensemble, the actors deliver a tight and emotional performance. While the comedy doesn’t always read well, they have an acute sense of how to complement each other’s performances. The best of them being Dawn L. Troupe. Her performance demonstrates a vast range of emotion that feels so natural and it cements the whole production together. Brian D. Coats has a smooth, booming voice and a relaxed presence that dramatically contrasts the paranormal movement of the ghost. Natsuko Hirano’s quick, sharp movements provide exactly what the production needs to give its audience a jarring experience. With charming comedic timing and inflection, Emily Kuroda uplifts the comedy and softens the gentle moments. Roy Vongtama’s presence and skill elevates Vin Kridakorn’s performance, which is stiff and unbelievable at first.

Prince Gomolvilas writes clues to foreshadow what happens next in a delightful and satisfying sneaky way. If one isn’t looking for it, one might miss it. All the story’s information is so necessary that by the end, nothing is left to the audience’s imagination. I personally do not like leaving the theater without a question for my artistic imagination to answer, however answering all the questions is typical of the horror genre, and once in a while, the gift of a neatly wrapped story tied with a bow makes my heart warm.

P.S. With no context (I don’t want to ruin it for anyone), I must declare the brilliant use of the slot machine – the information surrounding its origins and how it ties into all of the characters is absolutely sublime.