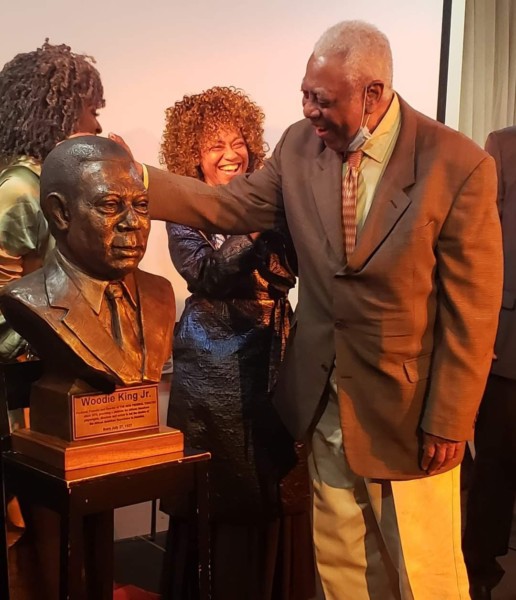 At the conclusion of the 49th annual Vivian Robinson/AUDELCO Recognition awards for Excellence in Black Theatre, on November 29, 2021 at Dwyer Cultural Center, 258 St. Nicholas Ave., Woodie King, Jr., founder of the storied New Federal Theatre, was surprised with a bronze bust of himself.  Maybe not that surprised, because he’d been tipped off earlier that day.  When the sculpture was unveiled, his mouth dropped and tears came to his eyes.  Jacqueline Jeffries, President of AUDELCO, recounts, “Of all the years I’ve known Woodie, it was the best moment of his life.”

At that point, the sixty or seventy people assembled broke out in cheers and whipped out cell phones to take pictures.  It was a signal moment in time for the nation’s most prominent Black theater producer, who has started the careers of scores of minority actors, playwrights and directors and whose recent tributes include the Tony Honors for Excellence in the Theatre and being named a Legend of Off-Broadway by the Off-Broadway Alliance.

The bust was created by one of the nation’s foremost custom bronze sculptors, Stan Watts, in collaboration with his sculpting partner of the last five years, Tami Brooks.  Have you seen the bronze statue of George Floyd on the steps of Newark City Hall?  That piece, weighing in at 700 pounds, is also the work of sculptors Watts and Brooks.

Watts received an AUDELCO Humanitarian Award at the gathering.  He has just placed a statue of Lincoln signing the Emancipation Proclamation at the African American Civil War Museum in Washington, DC.  Watts is also sculptor of the statue of Lincoln delivering the Gettysburg Address that stands at Medal of Honor Grove in Valley Forge, PA.  One of his most famous bronze monumental sculptures, entitled “To Lift a Nation,” is taken from the famous photo of New York City firefighters raising a flag over the collapsed World Trade Center site. That three-times life-size monument is located at the National Fallen Fire Fighters Memorial in Emmitsburg, Maryland.

Watts’ AUDELCO award says, “In recognition of your love, generosity, and your commitment to end racial injustice.”  He was the only white person to be honored that night and says he is grateful to be part of the same family.

A delicious irony was lost on nobody that Confederate statues are being melted down this year while statues of Black victims of police brutality are going up.

The Woodie King, Jr. bust was actually something Watts had to set aside when he took time to make the George Floyd statue.  It all started three years ago when Leon Pinkney, an original member of Woodie’s New Federal Theatre, decided to thank the man who started his career.  Pinkney is known for the films “Car Wash,” “Aaron Loves Angela,” “The Man Who Loved The Stars” and “The Gambler” with James Caan, among others. He seized on the idea of a bronze statue of Woodie and found Stan Watts and his studio, Atlas Bronze Casting, online.  Pinkney commissioned a bust and supplied photos and videos for Watts and Brooks to work from.

Then the process was interrupted.

In 2020, when George Floyd was murdered by a police officer in Minneapolis during an arrest for using a counterfeit $20 bill, Pinkney wanted a monument to honor the divine breath and life in him.  So he commissioned a statue of Floyd from Mr. Watts.  It caught the attention of Ras Baraka, Mayor of Newark, who immediately decided he wanted it for Newark’s City Hall.

Ras Baraka is, interestingly, the son of playwright Amiri Baraka.  In his revolutionary and storied theatrical career, Amiri Baraka (born Everett LeRoi Jones) had eight plays produced by Woodie King, Jr.’s New Federal Theatre and directed one.  Most recently, he was the subject of “Looking for Leroi,” a play by Larry Muhammad presented in New Federal Theatre’s 2018-19 season that explored the role of the Black playwright for our age.

The statue of George Floyd was unveiled in its current placement by Mayor Baraka, Leon Pinkney and Stan Watts on Juneteenth, June 17, 2021.  And there it stands now, at least for the next year.

Watts says, “If you can do a bronze–sing a song in metal or bronze–centuries later, it is still singing.  Artifacts will tell the story.”  He continues, “Everybody loves the actors Woodie had a hand in giving us.  My job is to say, that’s worth remembering.  Being an actor lifts mankind for a moment and you are a better person for having witnessed them.  My job is to perpetuate this.”

Watts also hopes to establish a workshop in Harlem where local high schoolers can learn metal sculpture in the style of classical realism.  He’s in conversations with Cliff Frazier about locating it at Dwyer Cultural Center, where Frazier is Executive Director.  That’s the same Cliff Frazier who came to NYC with Woodie from Detroit in 1964.  Is anybody in Black Arts untouched by Woodie King, Jr.?

Leon Pinkney, who commissioned the statue, has worked with Woodie King, Jr. since he was 16, when Mr. King was Cultural Director of Mobilization for Youth.  At 21, he directed the film “Epitaph,” written by Richard Mason, that was produced by Mobilization for Youth. He studied and taught in New Federal Theatre’s training program and acted in NFT’s productions including “What the Wine Sellers Buy” by Ron Milner and “Aid to Dependent Children” by Umar Bin Hassan.  He is a past Artistic Director of the AUDELCO Awards.

The bust is on display now at Dwyer Cultural Center, and will be moving ultimately to a permanent home in the Charles H. Wright Museum in Detroit, where Mr. King’s papers are already housed.

Watts is looking forward to doing other statues for the Harlem community.  He also hopes to do a full lifesized figure of Woodie reading a script.

The bust of Woodie, meanwhile, has created quite a buzz for its on-target likeness.  The mouth is closed and the eyes are spot on.  “It’s harder to do living people,” Watts reflects. “You get too much advice.”  But Woodie had not seen it in the works.  Watts had worked entirely from the photos and videos that Leon Pinkney had given him.

Of course, a bronze statue evolves in stages.  From a clay sculpture, a silicone rubber mold is made.  Wax is poured in ¼” thick and that is cast–invested ten times in a porcelain/sand mix.  You let it dry, then heat it so the wax burns out.  Molten bronze is poured in, which fills where the wax was.  You clean it up and weld the pieces together.  At this point, it’s gold in color.  The bronze figure is sandblasted and sulfuric potash is used to make it brown and consistent in color.

Because the statue was such a surprise, Jacqueline Jeffries is planning to release the video of the event some time in January. The experience will be online for all to see.  It will be an edited version of the night.  She says, “I am still moved by how grateful Woodie is for the statue.  Hopefully, it’s just the beginning.  It was an honor to have Mr. Pinkney call on us and to have AUDELCO be part of it.”

Suzanna BowlingJanuary 19, 2023
Read More
Scroll for more
Tap
Roundabout Theatre Company and Sara Bareilles to Honor Tony Award-Winning Legend Chita Rivera
The Ocean at the End of the Lane Ripples Out Grief and Bravery for All