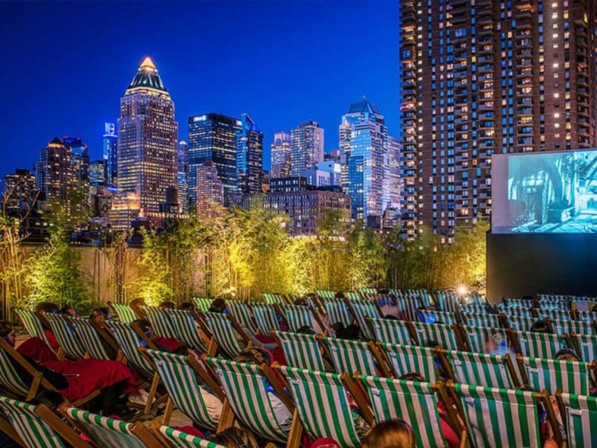 The Green Room 42 is thrilled to announce The Celebrity Cruises Rooftop Garden Cinema Series, consisting of five films shown on Saturday evenings from June 18 to July 23, 2022. The Green Room 42, located inside YOTEL Times Square (570 Tenth Avenue, Fourth Floor), has teamed up with Celebrity Cruises to bring its magical Rooftop Garden experience from its new Edge® Series ships to the skyline of New York. For an even more immersive experience, guests will be served food and beverages inspired by each film as they watch. These events will not only be memorable, but also be impactful, as all ticket proceeds will benefit Broadway Cares/Equity Fights AIDS.The Celebrity Cruises Rooftop Garden Cinema Series will show films inspired by the brand’s values and what travelers experience onboard its stunning ships. The series debuts with Mamma Mia!, which gives a taste of the incredible destinations Celebrity sails to while also paying homage to the cruise line’s Greek heritage. Alice in Wonderland celebrates the creative and thought-provoking design, that can be found on every ship in the Celebrity fleet. Last Holiday celebrates Celebrity’s luxurious accommodations, and Eat Pray Love represents the brand’s holistic wellness offerings, including its award-winning spa, fitness classes onboard, and healthy dining options. Finally, Ratatouille is a nod to Celebrity’s commitment to culinary excellence, including its menus designed by a Michelin-starred chef.  Guests will arrive in style to a cocktail hour featuring themed bites and activations before heading outside for the show at dusk. During the film, they will be served plates and cocktails inspired by what’s happening on screen before their eyes.Celebrity Cruises and The Green Room 42 are thrilled to announce that all ticket proceeds will benefit Broadway Cares/Equity Fights AIDS. Broadway Cares/Equity Fights AIDS is the philanthropic heart of Broadway, supporting The Entertainment Community Fund (formerly The Actors Fund) and organizations across the country provide meals and medication, health care and hope to those living with HIV/AIDS, struggling with COVID-19 or facing other debilitating illnesses.Tickets for each event include beer, wine, and appetizers during the cocktail hour, as well as two specialty cocktails and small plates during the film. Tickets are on sale now – to view the schedule and purchase, visit https://bit.ly/rooftopcinemaseries. For more information on Broadway Cares/Equity Fights AIDS, go to broadwaycares.org/.