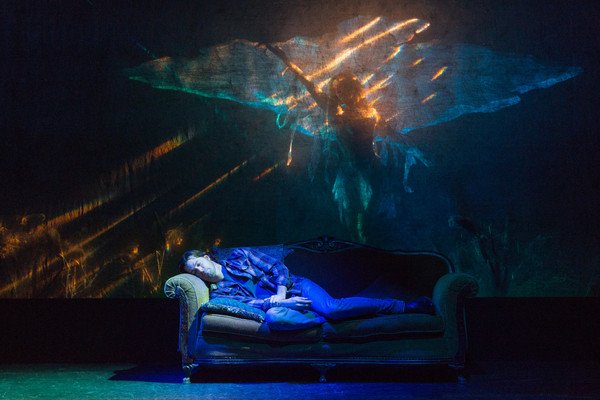 The Chekhov Dreams A Satisfying, Romantic Night At The Theatre

The Chekhov Dreams A Satisfying, Romantic Night At The Theatre 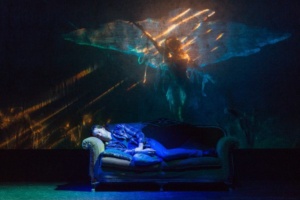 What do you do, if the love of your life passed on? John McKinney’s The Chekhov Dreams, which opened Saturday night at The Beckett Theatre explores that realm of thought. Reminding me of a lighter version of Truly Madly Deeply, in which a woman dealing with inconsolable grief over the death of her partner gets another chance when he returns to earth as a ghost. In the Off-Axis Productions in association with Off  The Leash Productions’s The Chekhov Dreams, follows Jeremy (Dana Watkins), who can’t get over Kate (Elizabeth Inghram: After the Ball, Busker Alley), who visits him every night in his dreams, to challenge his litery trivia. These two are a match and it is clear to see why he misses her, they are soulmates who share a love of authors’s quotes. The two made a pact to always be together, no matter what and Jeremy has kept that pact. On New Years Eve, his brother Eddie (Christian Ryan) who enjoys life to the fullest, states that two years has been enough to grieve. Sick of seeing his brother wasting his life away Eddie, threatens to off himself  with booze and drugs if Jeremy doesn’t take back his life. The deal is Jeremy must take one class, once a week and report back on his progress. Ultimately Jeremy agrees and takes an acting class. His scene partner Chrissy (Charlotte Stoiber), starts to awaken in Jeremy the life he has missed, annoying Kate who takes things a step further. Ironically the scene Jeremy has been given, is by the one playwright he loathes, Anton Chekhov. Will Kate or Chrissy win Jeremy’s life? 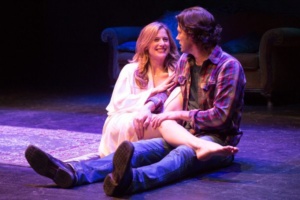 Dana Watkins reaches into our hearts as the man inconsolable in his longing for what once, was a perfect love. We ache for his loss and cheer for him to choose life. His self loathing over the fact that he was the one to live, is heartbreaking. Elizabeth Inghram is the perfect dead lover, who is the epitome of love, but turns revengeful and reveals both lovers inner demons. She is the ultimate Snow Queen without mercy, longing for her own selfish wants. Her scene with Chekhov (an etherial and wise Rik Walter) allows Jeremy to finally move on. Charlotte Stoiber is the perfect innocent whose dreams mirror and wake Jeremy from death. Christian Ryan nearly steals the show with his witty and hysterical portrayal of a man who uses life’s pleasures to escape the true meaning of life. This man’s rubber face, is beyond comical 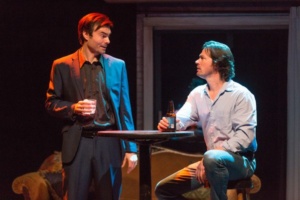 John McKinney’s uses Chekhov’s The Seagull as the scene Chrissy and Jeremy perform and Jeremy’s favorite book The Snow Queen to examine life, death, love, loss, grief and coming back from the ibis to tell a more powerful story than what is initially seen. While this might seem like a chick flick or a mindless sitcom, there is more than meets the eye and ultimately this show is completely satisfying. 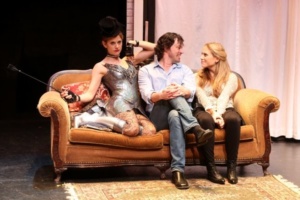 Leslie Kincaid Burby makes this production, oh so watchable. Scenic design by Scott Aronow, costume design by Christina Giannini and Kimberley Windbiel, and especially the lighting design by Diana Duecker are all done to perfection. 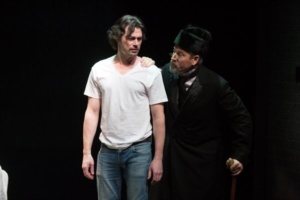 This is a show that will make you like life and be glad that you went to the theatre. I recommend this show highly. Sadly the run is short so get tickets now.

The Chekhov Dreams: Off-Axis Productions in association with Off  The Leash Productions’s, The Beckett Theatre, 410 West 42nd St. until Feb. 17th.