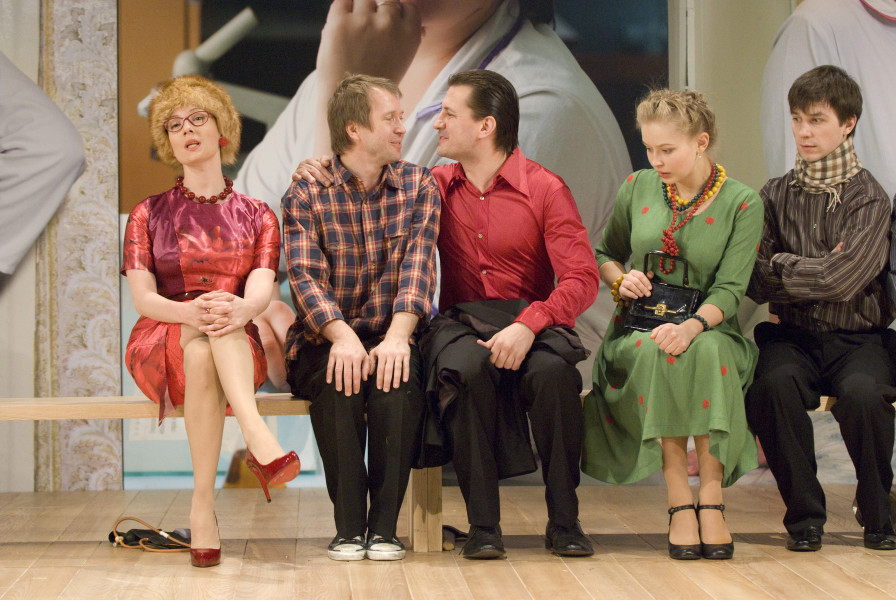 The Cherry Orchard Festival (www.CherryOrchardFestival.org), promoting cultural diversity globally, is back for the fourth year with two unique programs, each showcasing the best of international artistry and talent. The Theater of Nations’ Shukshin’s Stories, based on the famous stories of Vasily Shukshin and directed by Alvis Hermanis (IL Trovatore featuring Placido Domingo and Anna Netrebko; Brodsky / Baryshnikov with Mikhail Baryshnikov) will play 4 performances at New York City Center (131 West 55th Street): June 8th at 8pm, June 9th at 8pm, June 10th at 8pm and June 11th at 8pm. Tickets, priced at $55-$150 are available through the City Center website (www.NYCityCenter.org), in person at the City Center box office or by calling 212-581-1212.

Renowned actors Chulpan Khamatova, Evgeny Mironov and Julia Peresild received rave reviews for their performance in The Theater of Nations’ Miss Julie at The Lincoln Center Festival in 2015.

Shukshin’s Stories is brought to life by the acclaimed director and set designer Alvis Hermanis, along with artistic director Evgeny Mironov.

Director Alvis Hermanis was recently named among the ten most influential European theater personalities of the last ten years by DU Magazine, a Swiss periodical for arts and culture. Born in Riga, Latvia in 1965, Mr. Hermanis currently works with major European theater companies, including Burgtheater Vienna, Schaubuehne Berlin, Munchner Kammerspiele, and Schauspielhaus Zurich; and in opera houses including La Scala Milano, State Opera Berlin, and La Monnaie Brussels. He has staged operas at the Salzburg Festspiele since 2012, and will continue in the 2015 and 2016 seasons. His most recent staging there was of Trovatore featuring Placido Domingo and Anna Netrebko. His many accolades include the Europe Prize New Theatre Realities, the Stanislavsky Award, two Golden Mask Awards (Moscow), Max Reinhardt Pen (Salzburg Festspiele), Nestroy Preis (Austria), and the Konrad Wolf Award (Germany). He has been artistic director of the New Riga Theatre since 1997.

After her 2014 tour, internationally known singer Tamara Gverdtsiteli returns to Stern Auditorium/Perelman Stage at Carnegie Hall with the world premiere of her new program called “Mamele, The Mother’s Eyes,” a collection of beloved Yiddish standards, and international hits in Georgian, Russian, French, and Italian, as well as the artist’s own best-known songs. Accompanied by Cherry Orchard Symphony Orchestra (USA) and conducted by Maestro Aleksander Tsaliuk, Ms. Gverdtsiteli is backed by the soloists of the famed Moscow Male Jewish Cappella. Tickets, which range from $35–$225 are available through the Carnegie Hall website (www.CarnegieHall.org), in person at the Carnegie Hall box office or by calling 212-247-7800.

An evening with Tamara Gverdtsitel – “Mamele, The Mother’s Eyes” will take place at Stern Auditorium/Perelman Stage at Carnegie Hall (881 Seventh Avenue) on June 1, 2016 at 8pm and Moscow’s Theater of Nations production of Shukshin’s Stories, directed by Alvis Hermanis, will run at New York City Center (131 West 55th Street) from June 8-11, 2016.

The Cherry Orchard Festival’s mission is to introduce and promote global cultural activity and exchange of ideas, aiming to enlighten and engage audiences through performing and visual arts, educational programs and events. Tickets are available at the City Center box office and at www.cherryorchardfestival.org. Group tickets, student discounts, and VIP tickets are available by calling Festival’s office at 1.800.349.0021 or e-mailing info@cherryorchardfestival.org.

Tamara Gverdtsiteli, a native of Tbilisi, Georgia, is a classically trained vocalist, renowned for her magnificent voice and unique timbre. A recipient of numerous prestigious awards, Ms. Gverdtsiteli has performed on some of the world’s most coveted stages, including San Remo, Italy; the Kremlin Palace in Moscow; Carnegie Hall in New York City; and the Olympia Hall in Paris. Ms. Gverdtsiteli has been recognized as one of the most popular Russian performers in the world, earning accolades from The New York Times, which called her ‘the Russian Edit Piaf’ in 2012 review.

The Moscow Male Jewish Cappella was established in 1989. Led by its current artistic director, Maestro Alexander Tsaliuk, it became one of the best professional Jewish academic musical groups in the world. The choir’s extensive repertory includes a mix of Jewish liturgical music, songs in Yiddish and Hebrew, Russian folk songs, and world music favorites. The group has performed in many leading performing arts venues, and collaborated with such renowned symphony orchestra conductors as Zubin Mehta, Arnold Katz, Mark Gorenshteyn, and Yuri Bashmet. The choir has also performed with such acclaimed Jewish soloists as Mikhail Alexandrovich, Nehama Lifshits, and Joseph Malovany.

The Cherry Orchard Festival, a production of the Cherry Orchard Festival Foundation, a registered 501(c) (3) organization, is a multi-day, multi-cultural, multidisciplinary celebration of international arts in the heart of New York City and beyond, where newest and most daring projects are presented. Their mission is to introduce and promote global cultural activity and exchange of ideas, aiming to enlighten and engage audiences through educational programs and events. The Festival’s vision is to create an ongoing dialogue between international artists and American audiences to promote greater cultural understanding, while encouraging family participation in the arts. The Foundation held their first annual International Arts Festival in New York City in 2013. Since then, the Festival expanded to Boston and Washington DC, where audiences were introduced to the critically acclaimed international theatre productions and provided with opportunities to enhance their Festival experience with educational pre-performance events and meet-the-artist sessions. For more information about the festival and to purchase tickets, please visit: www.cherryorchardfestival.org or call 1.800.349.0021.

Group and student discounts are available for all festival events. For more information or to purchase tickets, please visit: www.cherryorchardfestival.org or call 1.800.349.0021