The Cherry Orchard Tears Down the Trees

The Cherry Orchard Tears Down the Trees 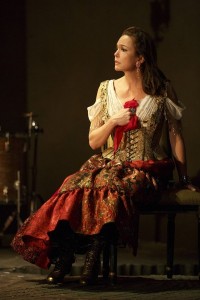 There’s politically correct and politically correct and Stephen Karam’s version of The Cherry Orchard is just as dull and as off kilter as The Humans. This time Karam has slaughtered Chekhov and British director Simon Godwin has directed in a way so that the play is confusing in so many ways. Let’s start with the costumes by Michael Krass, where he puts the maid in a semi period piece with lace socks and high heels? The costumes are a combination of modern and the rest from another century and for the most part unappealing. The set by Scott Pask is miniaturized, with modern pterodactyl mobiles thrown in for no apparent reason. It is cold, grey and off putting. The piece including the actors has so many parts with none of them really coming together. It is a mash up that is all clutter and no substance. The language of the play follows the same suit with modern-day slang and  progressive politics. It was like sitting through a conversation of this years politics… tiresome. The cast which is star studded over acts and misses the nuances of the play, only Celia Keenan-Bolger, comes off unscathed. 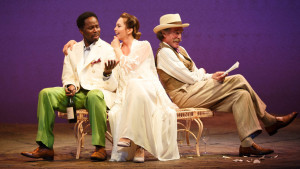 Diane Lane is the big draw and she is a good actress and we get flashes of it in this jumbled mess, but she skirts from moments that mean something to over acting. She does however command the stage. Ms. Lane plays Ranevskaya, who has returned to her childhood home, with her older brother, Gaev (John Glover). Both can not face the reality of poverty, due to their over abundant life styles. They live in a fantasy world that is soon to crumble as their estate is about to be sold out from under them. Lopakhin (Harold Perrineau), tries to help them out, but they refuse to see. Lopakim has a soft spot for the family and especially Ranevskaya’s housekeeper and adopted daughter, Varya (Celia Keenan-Bolger). The family places on Anya (Tavi Gevinson) to marry well except, she is in love with her  tutor, Trofimov (Kyle Beltran). 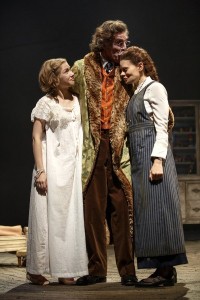 Included in the cast is the wonderful Tina Benko, Susannah Flood, Quinn Mattfeld, Chuck Cooper and Joel Grey, all under used. All of the cast is acting in different versions of the same play and it is a wonder nothing connects at all.

Lopakhin  breaks into a demented dance when he tells the family he now owns the cherry orchard stating “Oh, if only we could move faster through this next part,” but we do not understand why.

Not knowing when to end the play now has two endings and it is the audience who feels cut off.

Suzanna BowlingAugust 5, 2022
Read More
Scroll for more
Tap
Rudolph The Red-Nosed Reindeer: The Musical Brings Joy to Children from the Garden of Dreams Foundation
Ship of Fools: The Dark Voyage of Oppression