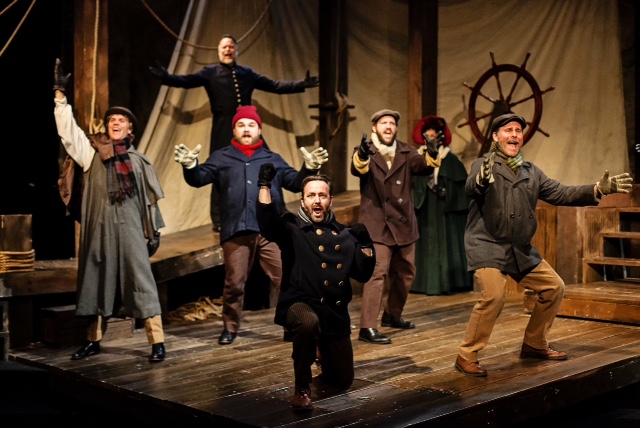 The Christmas Schooner – Set a Course for Holiday Adventure

The Christmas Schooner – Set a Course for Holiday Adventure 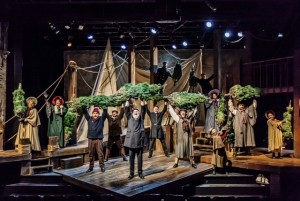 Setting sail for it’s fifth straight year, Director L. Walter Stearns helms the delightful holiday themed The Christmas Schooner. Part history lesson and part enchanting musical, this winning combination will tickle the heart of the old and young alike. With a book by John Reeger, original music and lyrics by Julie Shannon, and musical direction by Eugene Dizon, this Chicago themed winner kicks ups its heels accompanied by Brenda Didier’s enthusiastic choreography and a team of 25 dedicated actors and musicians.  Looking for a holiday treat grounded firmly in reality, The Christmas Schooner delivers. 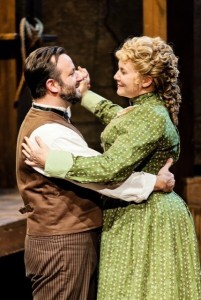 The story surrounds the initial voyage of the original Christmas tree ship, The Rouse Simmons, and its effect it on the Stossel family. Captain Peter Stossel (the always charming Stef Tovar) and his crew, brave fierce weather conditions to bring evergreen trees and the Christmas spirit to Chicago from the Upper Peninsula of Michigan. 19th century German immigrants eagerly awaited the delivery of the pines, so essential for their holiday festival traditions. The ship would dock in the Clark Street Docks and sell out their entire stock of Michigan Pines in days. Initially planned as a one time voyage, the overwhelming success of the first delivery, set to the robust tune of Hello, Chicago, inspired the Captain and his crew to make this an annual tradition. 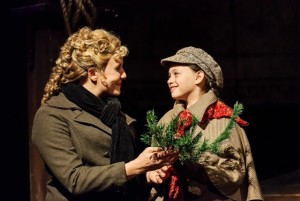 Precarious and perilous due to the notoriously rough and menacing weather on the lake during November and December, the family was divided by this voyage. The Captain’s wife, Alma (Brianna Borger) started the production in the traditional role of wife and homemaker, but ended the story empowered, with a rich and powerful, ahead of its time, storyline and stunning solos showcasing her lush vocals during Questions and When I Look at You. It will be impossible not to be instantly won over by young Peyton Own as the Captain’s 9 year old son, Karl, and also by James Wilson Sherman as the wise grandfather, Gustav. 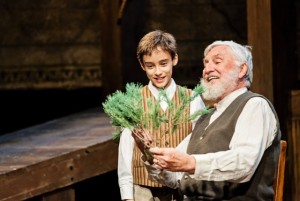 Dressed in period accurate costumes designed by Carol J. Blanchard, the hard working cast delights when delivering the sage holiday lesson,”the true definition of Christmas is not found in riches, but in our service to others.” You will have a smile on your face with an ending that involved the entire audience and a branch of evergreen shared with the wish “take it and pass it on” while the cast sang the lovely The Blessings of the Branch. What made this tale so endearing was the repeated theme of respecting and honoring multiple generations of family. I cannot think of a richer holiday blessing than that. A unique and uplifting tale, based on actual events, set sail for a good time with Mercury Theater’s The Christmas Schooner.
Mercury Theater Chicago’s The Christmas Schooner is now playing through December 27, 2015.
Related ItemsChicagoimmigrantsNewStephen BestThe Christmas SchoonerThe Rouse SimmonsTimes Square Chronicles
Entertainment