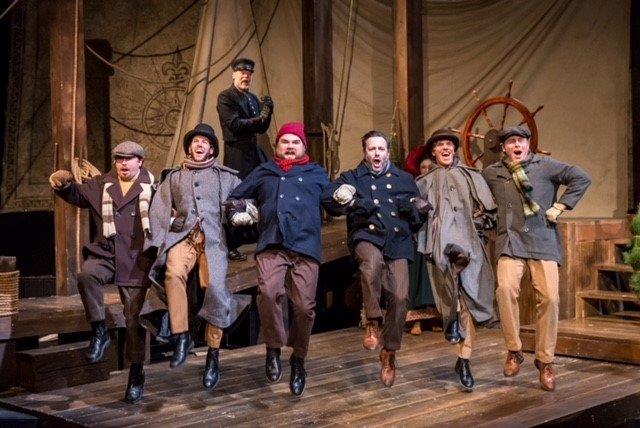 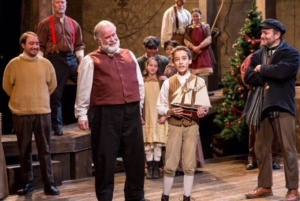 Setting sail for it’s seventh year at the Mercury Theater, Director L. Walter Stearns helms the enjoyable, holiday themed, The Christmas Schooner. Part Windy City flavored history lesson and part enchanting musical, this winning combination will tickle the heart of the young and old alike. With a book by John Reeger, original music and lyrics by Julie Shannon, and enthusiastic musical direction from Eugene Dizon, this annually staged winner again kicked up its heels with Brenda Didier’s enthusiastic choreography and a team of nearly two dozen dedicated actors and musicians. If you are looking for holiday entertainment grounded firmly in reality,The Christmas Schooner delivers yet again. 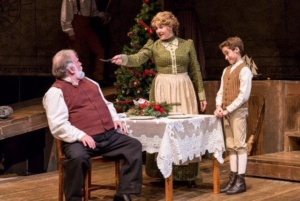 The story followed the inaugural voyage of the original Christmas Tree Ship, The Rouse Simmons, and the powerful effect it brought, not only to the Stossel family, but to their surrounding community as well. Captain Peter Stossel (Stef Tovar, once again in fine voice) and his crew of brave men faced fierce, late season weather conditions to bring Christmas spirit, in the form of evergreen trees from the Upper Peninsula of Michigan, to fellow 19th century German immigrants, countrymen and women living in Chicago. Their ship would dock at the Clark Street docks and the entire inventory of Michigan pines would sell out in days so these Chicagoans could continue to share their festive holiday traditions with their individual families. Initially planned as a one time voyage, the overwhelming success of the first delivery and the joy that it brought to so many, set against the robust tune and hearty choreography of Hello, Chicago, inspired the Captain and his crew to make this voyage an annual tradition. 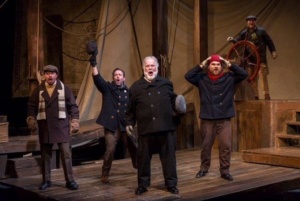 Precarious and perilous due to the notoriously rough and menacing weather on the lake during November and December, the family was divided by the decision to make these repeat voyages annually. The Captain’s wife, Alma (Brianna Borger) was against the trip. She began the production in the traditional role of wife and homemaker, but ended the tale empowered and emboldened. Borger’s stunning solos showcasing her lush vocals, especially during Questions  and When I Look At You, continue to impress. It would be impossible not to be instantly won over by young Leo Gonzalez, cast as the Captain’s nine year old son, Karl, and also by Don Forston, once again returning as wise immigrant grandfather, Gustav. New to this year’s cast, Nicole Armold, last seen as the lead in Mercury’s practically perfect Mary Poppins, sharing her velvety smooth soprano in the dual roles of Martha and Kate. 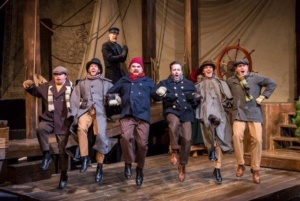 Adorned in period accurate costumes crafted by Carol J. Blanchard, the dedicated cast delights when delivering the sage holiday lesson “the true definition of Christmas is not found in riches, but in our service to others.” In a real world divided by the coarse realities of a tense political climate, this gentile escape couldn’t come at a better time. You will have a smile on your face with an ending that involved the entire audience and a branch of evergreen shared with the wish “take it and pass it on” while the cast sang the lovely The Blessings of the Branch.  What made this tale so endearing was the repeated theme of respect and honor to one’s community as well as to multiple generations of family.  I cannot think of a richer and more sage holiday blessing than that. For a unique and uplifting tale, set sail for a good time with Mercury Theater’s The Christmas Schooner.

RossSeptember 17, 2022
Read More
Scroll for more
Tap
Meet Joe Iconis Before his The 10th Annual Christmas Extravaganza at Feinstein’s/54 Below
This Way Outta Santaland (And Other Xmas Miracles) – A Joyous Adults Only Christmastime Treat