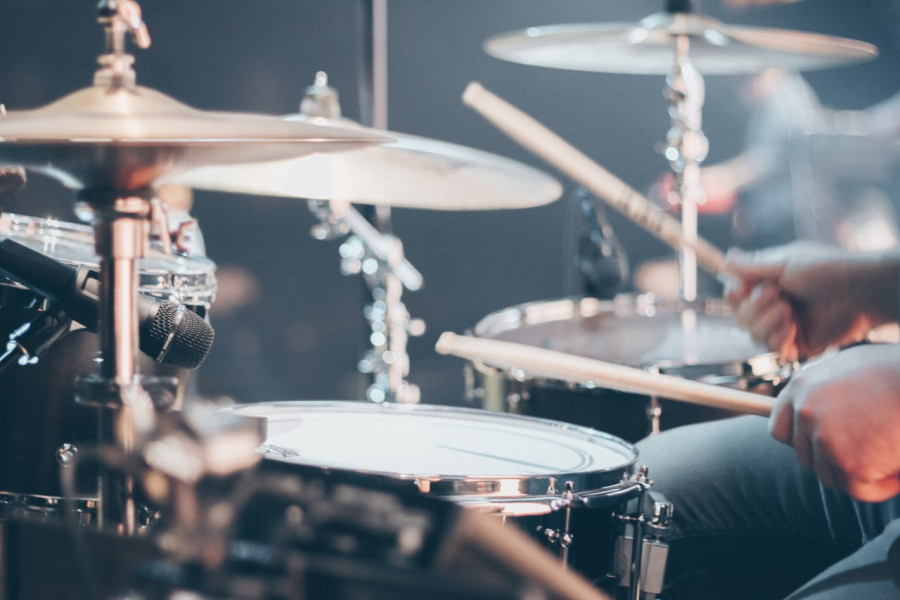 Josh Garza is the drummer of Secret Machines, and a well-known professional in the industry. His distinctive sound is shaped by the great drummers of the past, but it’s only made possible by his own take on the material. Now that his band has reunited, it’s worth looking at both his trajectory in the music world and how he was able to become the respected name he is today.

The most recent Secret Machines’ album is a throwback for the group. Devoted fans of the band may know that the band recorded much of the material in 2010, and only recently reworked it after coming back together. Like many of the band’s works, you can hear the influence of John Bonham come through on the tracks. Garza has compared the drumming legend’s talent on his kit to the likes of Hendrix on his guitar.

When Garza discusses the sound on Secret Machines, he talks about his decisions on both the size and tunings of his drums. With two 16” floor toms, a 14” rack tom, and a 28” bass drum, the Tama kit is the same size that Bonham had. When talking about his equipment, Garza said, “I got the idea for the tunings on these big drums from reading that Bonham tuned his drums really high, like a big-band drummer. On my kick the batter head is tuned high and tight, and the resonant head is loose and full of juice.”

Josh Garza is not aiming to be a copy of Bonham, though, and he’s quick to point out that his drumming is far more himself than Bonham. His whole strategy is to get as deep as he possibly can into the sound, dissect it, find what he’s looking for, and turn it up. He doesn’t let fear hold him back either. When he knows what he wants out of his sound, he does whatever he can to get it.

Josh Garza has been influential in the music industry not only because of his distinct temperament and talent on the drums, but because he’s spent time everywhere in the nation. As the drummer for the Secret Machines in New York City (originally from Dallas) and EFG in Los Angeles, he’s learned a lot about how different parts of the world relate to his music.

The History of Garza’s Success

Garza is originally from Dallas, and he’s spent the past two decades writing and recording. Garza laid down the tracks for his first album in the early 1990s, and influenced countless modern musicians since he got his start. His impressive portfolio of original works speaks to his love of music. From a young age, he knew that this was what he wanted to do.

His first band was called Comet when he was 17 years old. In 1993, he was an original member of the Dallas-based band, and he would remain with the group until 1997. The three albums that Comet produced taught Garza innumerable lessons. He learned more about who exactly he wanted to be behind those drums and how he could map out a route to get there. Because of the band’s genre, dream pop and indie rock, he was able to explore both the music and his own limits. Even in those early days, he was already making a name for himself. Comet gave Garza a taste of what he wanted, and it left him ready to expand his career and really leave his signature on the wider world of music.

Like Comet, Secret Machines got its start in Dallas. In 2000, Brandon Curtis, Benjamin Curtis, and Josh Garza performed and recorded together for seven straight years, building up a fan base and cementing their sound. Like many bands, though, the group had their own individual dreams to go after. In 2007, Benjamin Curtis left the group, and in 2010, the band officially broke up.

Thankfully, the band had the bonds and the base they would need if they ever wanted to come back together, which they officially did in 2020. When the band reunited, their audience was delighted — so was Josh Garza. Over the course of the band’s life, he worked incredibly hard to make it a success. In addition to the 5 albums he contributed to and 10 singles, he also helped produce a DVD called Marfa Mystery Lights. This performance was subtitled a concert for the UFO’s, and was recorded by Charles de Meaux.

During the break from Secret Machines, Josh Garza was still making music. He teamed up with Imaad Wasif to create EFG, a band that would help him further perfect his craft. From 2011 – 2016, Garza ran the drums for three albums by EFG, and by the time the band had run its course, Garza had the name and reputation in the music industry that he had always dreamed of.

Garza has won a number of honors over his years as a drummer, including awards from Esquire. He is one of the lucky few to receive an Esky Award, a recognition he shares with greats like Coldplay and Lil Jon. As the Best Drummer of the Year, Esquire has proclaimed Garza to have the kind of rare explosive sound that is shaped by precision. While Secret Machines is a collaborative effort, Garza’s sheer brilliance on the drums was what made the three-piece band ‘a veritable sonic army.’ He’s been featured in Modern Drummer as an authoritative voice on both his specialty and the industry.

Across the Universe debuted in 2007 and quickly became famous for its soundtrack. Based on the songs of the Beatles, Julie Taymor’s film featured 34 tracks that were originally recorded by the Fab Four, and included appearances by Bono, Joe Cocker, and Salma Hayek. It also features recorded tracks by Josh Garza, who performed “I Am the Walrus” with Bono and played the drums on “Blue Way Jay” and “Flying.” Fans can hear him give his all on all three songs, and his contributions undoubtedly helped fuel the success of both the film and the soundtrack.

The Stylings of Garza

There is no shortage of drummers who would list John Bonham as one of their influences. His distinctive style has left the musical world changed forever, thanks to his penchant for thinking outside the box. For Josh Garza, though, he’s taken his appreciation to a whole new level. What’s more, he was able to do it without losing his own proverbial voice.

Garza might be a rock drummer, but there’s a lot happening when you actually listen to the music. His drum kits are tailored specifically to his tastes. He may draw inspiration from Bonham, but he uses that as a jumping off point to make the song into something of his own. Experimenting with dreamy sounds was what Secret Machines was known for, and Garza pulled from a variety of genres to combine different energies into one coherent work. Eerie, cheerful, energetic: the band leaned on the Krautrock guitar, drums, and keyboard to push boundaries and challenge the listener’s preconceptions. Every time you listen to one of Garza’s songs, you’re likely to discover something new.

Garza has built his success based on his own instincts and innate skills. He’s been diligent about sharing his unique perspective and music and writing songs that hopefully give the listener new angles to examine their love of music. However, when it comes to discussing his heroes, he is by no means shy about paying credit where credit is due.

In addition to Bonham, Garza has also said that Buddy Rich has been an influence on his career. Josh Garza’s goal is to resurrect their work and allow modern audiences the chance to connect with it on a different level. As a contemporary drummer, Garza understands the cyclical life of different genres, artists, songs, and albums. Unsurprisingly, Garza himself has been an influencer for bands like Kings of Leon and Sun Pickups.

Part of his reputation in the industry is thanks to his bold attitude. When remarking on his albums, he hopes that listeners recognize that the band ventured into unknown territory. Far from shock value, he wants his fans to pick up a vibe from the stream-of-consciousness style, one that leads them to a new understanding of what music can (and should) be.