From the depths of Calgary, Canada, Coronas’ frontman Danny O’Reilly makes his requisite interview call. For some musicians, this is a toil that’s dreaded, but O’Reilly doesn’t do it reluctantly; he’s quite enthusiastic to wax philosophical about being in a band, now seasoned by more than 10 serious years of recording and touring. This quintet has slowly but surely built a following throughout the UK, in Ireland, and Europe. Now, they’re making a substantial plunge into North America —particularly throughout the United States. 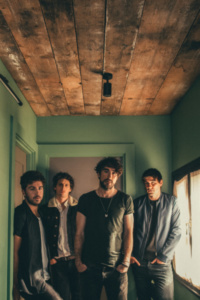 As the band makes its incursion in the States this weekend, the singer with marquee-quality good looks had to be asked about his fears of not getting the expected audience. But generally he’s undaunted and full of positive expectation. Explains this Corkman, “We’ve had a great year touring North America, and can see the work paying off with crowds increasing. We plan to keep coming back and building it like we did at home. We were never an overnight success in Ireland, so we’re excited to emulate that process overseas. 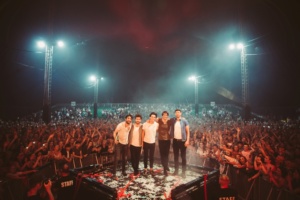 “The only thing I get nervous about is how the shows are selling if it’s a new market. If I didn’t feel that way, that I have to work hard in thanks that made it this night, I don’t think I would pull them in otherwise. I try to distract myself but I always ask the manager how ticket [sales] are going. 99% of the time I get a good answer, but I still always have that little anciety… We did that thing where we started out playing to venues with no people. But if there’s a crowd there we have faith in ourselves to put on a good show and win them over if they give us a chance, even if they’re not into our style of music.”

In anticipation of seizing audience ears and eyes, The Coronas rolled out “Reprise,” a five-song EP of new music ahead of the tour. A follow-up to “Trust The Wire,” their recent long player — which became their first number one album in its first week of release when it debuted at the top of Irish music charts. The album snared radio play in the US with released singles and music videos of “Real Feel” and “We Couldn’t Fake It.”

And while their sound has been described as a variant of Coldplay’s guidelines, that’s not necessarily a bad thing. Says the veteran performer, “I’m a fan of Coldplay, I saw them last year and it was one of the best shows I saw. When we play bigger venues back in Ireland we use a lot of similar production techniques and I think Chris Martin is an amazing songwriter. We evolved over the course of our albums more than others.

“I think it was Noel Gallagher that said that if you take a lot of little things from a lot of different people you’ll come up with something original. And so we have our own sound.”

And however much there’s a clear Corona sound, these two recent productions illustrate how O’Reilly and his co-writers brilliantly craft a substantial, broad-ranging catalog of songs. And it’s not a sound that overtly reveals its roots. “We’re not the first Irish band to not sound Irish. If you look at U2 and the sound they had, did they sound Irish?”

He acknowledged, “They sound American. These are bands that inspired us. It’s not that we’re not proud of our Irish heritage — we are. But I think our music isn’t Irish sounding though.”

As for what they write about, they’re not out to make political diatribes or grand-sweeping soundscapes. They really do it straightforwardly and revealing. “Our lyrics have always focused on being honest and I always found the more honest I was the more I put myself on the page even if it was slightly cliched. People relate to those lyrics and its the lyrics I see people singing back in the crowd that I’m proud of.”

These two recordings, especially “Reprise,” are present-day Coronas as Danny outlined: “We recorded it in Dublin, where we all now live, and  it was the first time we recorded at home since our very first album — believe it or not. It’s also the first piece of work we co-produced with our live engineer Darren Clarke, who’s demo-ed us for years so he worked very comfortably with us. The songs on the EP were written at different times over the past few years, and, either never got finished, or didn’t fit on either of the last two albums, but we always liked them and wanted to finish and release them.”

As for writing material for the next record, Danny recalled, “We spent a few weeks in May in County Kerry in Ireland, locked ourselves away together and started writing. I was surprised how much we got done, and how easily it came out of us. Some writing sessions are more productive than others, so we probably won’t get around to finishing the songs and recording all of it with all the touring ahead of us this year.”

As for what the songs are about, he reflected, “Some people think our songs are about friendships or little stories about how we love what we do. Songs like ‘Gimmie a Minute’ are about my struggles to be the best I can be. There’s always some relationship songs. There hasn’t been one big scar, but plenty of small ones. I suppose I do [need some fixing]. I think everyone does. Sometimes you bring out the best in someone else.”

He added an assessment of the songs he felt hit the mark, “‘Give Me a Minute’ and ‘We Can’t Fake It’ — off the new album —  I’m particularly proud of. Off the second album is the song ‘The Long Way,’ and the album before that was ‘Closer To You.’ ‘Years Ago’ from the first album, we play that live and it gets a great reaction.”

So how does he do it? “Only a couple of times have I been walking down the street and a melody came to me and that turned into a song. More often it’s a chord I like the sound of first. Just a few chords and then the melody and any words that come into my head. Whatever sounds good with the chord, it could be gibberish at first or a line that doesn’t make sense, but I’ll write around that line. The guys will jam around it and do what they can do it. Dave and I will work on the lyrics together. It’s very collaborative. We look forward to it, we enjoy the process.”

But it’s not all Danny O’Reilly on vocals and guitar. As their bio described, “He and Graham Knox have known each other practically since their birth which was just two weeks apart. Their parents were friends, and essentially the pair grew up together. They met Conor Egan at Terenure College secondary school in Dublin where, in 2001, they formed a band called Kiros with O’Reilly on vocals and guitar, Knox on bass and Egan on drums. Kiros morphed into Corona — the name taken from the Smith-Corona typewriter in Cameron Crowe’s ‘Almost Famous,’ his classic film about the music business — and ultimately, The Coronas. The lineup was finalized in 2006 with the addition of Dave McPhillips on lead guitar.”

The Coronas’ O’Reilly, Knox, Egan, McPhillips, plus Johnny McSharry on keyboards, have five critically-acclaimed albums to their credit — four of them double platinum in Ireland and one on its way — and have spent a decade touring all over the world. Said O’Reilly: “We’re passionate, we love what we do, we try to get the crowd to sing along and join the show. Above all, we appreciate what we do every night, and never take it for granted and that attitude seems to help get the crowd enjoying themselves too. It’s the best job in the world.

And as for the future? “The more we do it, the more we appreciate it and keep our ambition going and keep improving. We came to the States a few times in our early days but got bogged down, but now we’re getting bigger and bigger and we want to build up the American market like we did with back home.

“We started the band 10 years ago when we left university. We said, ‘We’ll give this band thing a go for a year and see what happens’ and here we are now still playing. Five or six years ago we played some big venues at home and our families were very proud of us. But it’s been a slow progress, not an overnight thing, And it’s been getting bigger, slowly, [but it keeps going].”