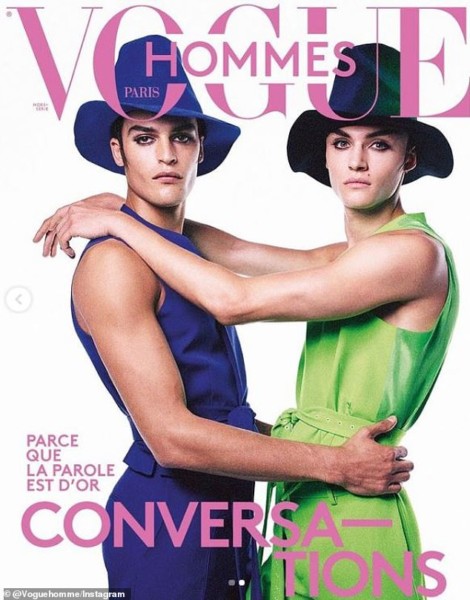 The 21 year old son of supermodel Helena Christensen and The Walking Dead actor Norman Reedus has been charged with misdemeanor assault over an alleged attack on a 24-year-old woman in the face. The incident happened at the San Gennaro street festival.

Mingus is a runway model who got into an altercation and sent a women to the hospital and was treated for facial injuries.

Mingus did not know the woman, he attacked her after they became embroiled in an argument.

The incident comes just one week after Mingus made his Vogue cover debut.

Now about the on-going drug problem of NY, thanks to de Blasio. Between Seventh and Eighth Avenues on 35th and 36th streets you are greeted by a sea of used needles, broken glass crack pipes, trash, urine, and feces. Junkies shoot up heroin, methadone and crack in broad daylight as bodies liter the sidewalk in varies stages of addiction.

Drug dealers offer their ware unafraid of the consequences. And where is the NYPD? They are there but the state and city leaders have “effectively ordered” to let the junkies roam free. Under state law, possessing needles or small amounts of heroin, or injecting drugs, are non-bail offenses. So even if arrested, addicts are usually right back on the street and unlikely to face prosecution.

Without the support of political leaders, the police risk being stabbed by the emotionally disturbed junkies, who have needles as weapons. They could be infected with HIV and face losing everything, thanks to NYC becoming the first municipality in the nation to end qualified immunity. And who did this de Blasio! So If an arrest turns bad, the police person who was doing his job could lose their pension, their job, their home or even their freedom. The drug addict gets rehab to be returned to the street again.

With the drug problems goes the added violence such as shootings, robberies, felony assaults, murders and an opioid crisis that has been terribly neglected.

Overdose deaths are escalating as synthetic methamphetamines and fentanyl, which are all manufactured in Mexican drug labs are shipped into New York City. There have been 1,446 overdose deaths in the first three quarters of 2020.

Who will and are paying the price? The business owners, the people who live in the area and tourists! If New York wants to return it needs to address these problems

Suzanna BowlingOctober 9, 2021
Read More
Scroll for more
Tap
The Manipulation of America: The Haitian Crises
Where Are The 27 California Public School Students That Were Left in Afghanistan?